Well, the New Year is upon us and you know what that means, right? One last weekend of parties and indulgence before we attempt to fit back into our skinny jeans. If you’re still looking for a satisfying meal that will wow the buttons right off your guest’s pants, here it is: Roasted Pork Loin with Bacon and Brown Sugar Glaze. 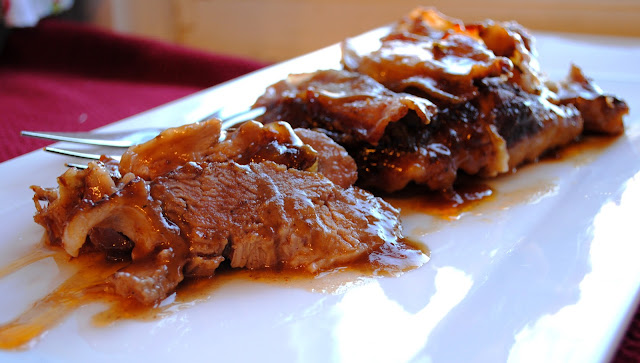 Until about one week ago I was a total pork novice (well, except for bacon…I can make some mean bacon, but then again, it doesn’t take much to throw some meat in a skillet and flip it when you smell something burning). Thankfully there’s this thing called the Internet that’s in the business of making newbies like me feel like they actually know what they’re doing.

I found this recipe, along with several other pork roast recipes, on Pinterest (I know,  you’re shocked). I don’t think I need to explain why I chose this one over the others. (Ummmm, pork wrapped pork? Winner!) After I decided on this one I was able to read the blogger’s comments, the comments of others who had made or viewed the dish, and even watch a video of someone making the pork. In a matter of about 20 minutes I went from being pork clueless to pork expert. 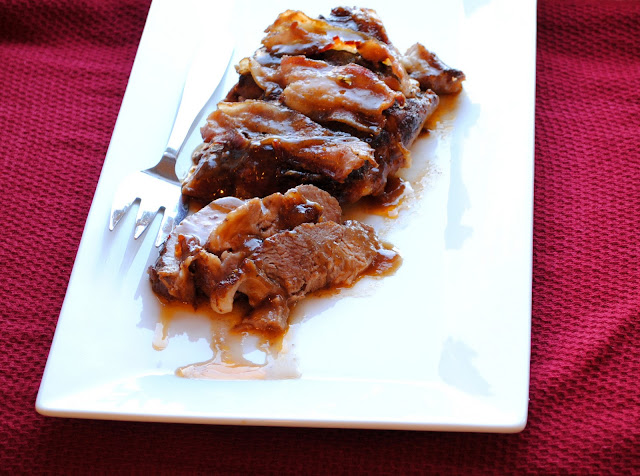 Even after reading all the glowing reviews and looking at lots of gorgeous pictures, I was still surprised at how satisfying this dish really was. It’s always thrilling when a meal that takes less than 15 minutes to throw together turns out to be one of the most delicious you’ve ever had. The pork smoky yet sweet, and fancy without being fussy. I was worried about it being dry, but it turned out totally moist and tender. Who knew pork was so low maintenance?
One last thing. Leftovers. You’ll want them. BBQ pulled pork sandwich anyone?
Roasted Pork Loin with Bacon and Brown Sugar Glaze
Yield: Serves 6
Recipe adapted from The Comfort of Cooking
Ingredients:
2 boneless pork loins, each 1 1/2 to 2 pounds in size
4 slices bacon
1 teaspoon chili powder
1/2 teaspoon paprika
2 teaspoons salt
1/2 teaspoon black pepper
1/2 teaspoon cumin
1 teaspoon cinnamon
For the glaze:
1 cup light brown sugar
2 Tablespoons flour (I used Bob’s Red Mill Gluten Free flour)
2 Tablespoon cider vinegar
1/2 teaspoon dry ground mustard
1 Tablespoon butter
Directions:
1. Heat oven to 350 degrees if baking immediately. If not, skip to step 2.
2. Line a 9 x 13 inch casserole dish with foil. place pork loins inside. Combine the chili powder, paprika, salt, pepper, cumin, and cinnamon in a small bowl. Rub mixture all over the tops of the pork loins.
3. Cut each bacon strip in half and lay across the pork loins, short-wise. (Probably not a word??)
4. Place in preheated oven and roast for 40 minutes or cover dish and place in refrigerator over night. The next day, remove cover and roast for about 50 minutes. Place the dish in the oven before it’s preheated to allow the dish to slowly come to the right temperature.
5. Meanwhile, combine the brown sugar, flour, cider vinegar, mustard and butter in a small saucepan. Heat for about 2 minutes, or until thoroughly combined and melted.
6. Pour brown sugar mixture over roasted pork loin and return to over for an additional 15-20 minutes, or until a meat thermometer reads 145 degrees. Don’t be afraid of a little hint of pink in the middle. If the pork is cooked too long it can start to dry out. Let sit for 5 minutes before slicing and serving. Spoon additional drippings from the pan over sliced roast if desired.