This Bacon Onion Balsamic Jam has perfected the sweet/savory balance, and it’s just the right compliment to a simple, juicy burger. 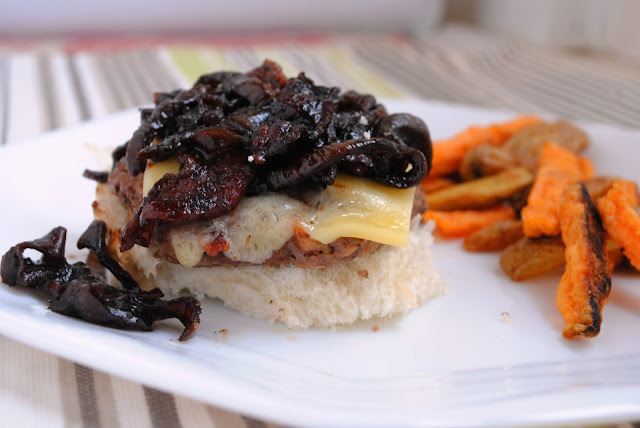 Today I’m telling you to put worms on your burger.

I know. This looks like something you were dared to eat by your cousin when you were 11.

I promise this is not the same. 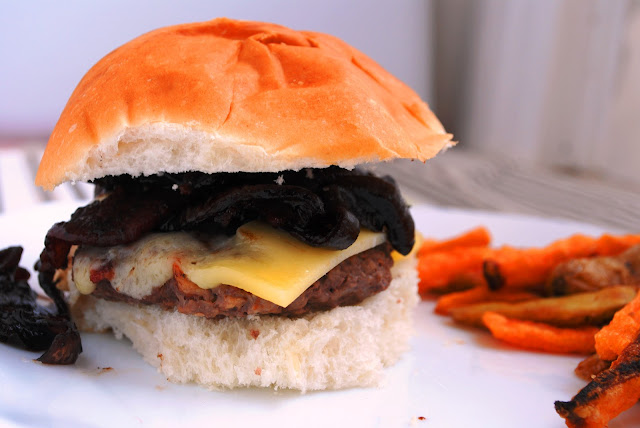 Those worms are actually a mixture of caramelized onions, bacon, balsamic vinegar, and a touch of Dijon mustard. Can you say brilliant?

This jam has perfected the sweet/savory balance, and it’s just the right compliment to a simple, juicy burger. I promise once you get that onion bacon deliciousness piled high between two buns, you won’t even notice the uncanny worm-like appearance.

And you don’t even have to wait until summer to enjoy these. I cooked these burgers in the warmth of my kitchen in a heavy bottomed skillet, and they turned out great!

I dare you to give them a try!

Burgers with Bacon Onion Balsamic Jam
Yield: 4 burgers
Recipe adapted from Annie’s Eats
For the burgers:
2 thick slices bacon
1 1/2 lbs. ground beef
1 1/2 tsp. Worcestershire sauce
1 tsp. kosher salt
1/2 tsp. pepper
Thinly sliced cheese (I used Gruyere)
Hamburger buns
For the jam:
4 thick slices bacon, cut in 1/2 in pieces
1 large red onion, thinly sliced
Salt and pepper
1/3 cup good quality balsamic vinegar
1/2 tsp. Dijon mustard
1/3 cup water
Directions:
1. In a large skillet over medium heat, fry bacon. Remove the 1/2 in. pieces when they’re cooked through but not crispy and set on paper towels to drain. Leave the other two on the heat until crispy, then remove from heat and crumble.
2. Remove all but about 2 Tablespoons of grease then add red onion. Season with salt and pepper, cover the skillet, and cook for 2 minutes. Uncover the pan and use a spatula to scrape browned bits from the bottom of the pan. Cover again and cook, stirring occasionally, until onions are lightly browned and soft, about 10 minutes.
3. Stir in the vinegar, Dijon, and water. Simmer until the mixture is thick and most of the liquid is absorbed, about 3 minutes. Remove from heat and set aside or refrigerate if using later.
4. Meanwhile, in a large bowl combine crumbled crispy bacon, ground beef, Worcestershire, salt, and pepper. Use your fingers to mix until well combined. Form into 4 patties.
5. Heat an outdoor grill to medium heat or an indoor skillet over medium heat. Grill to desired doneness, about 4-6 minutes per side. Immediately after removing from grill, top with cheese of choice.
6. Place hamburgers on buns and top with bacon jam. Serve immediately.