Embrace the mess of these Yellow Butter Cupcakes with Double Chocolate Coconut Frosting. Grab a fork and dig in! 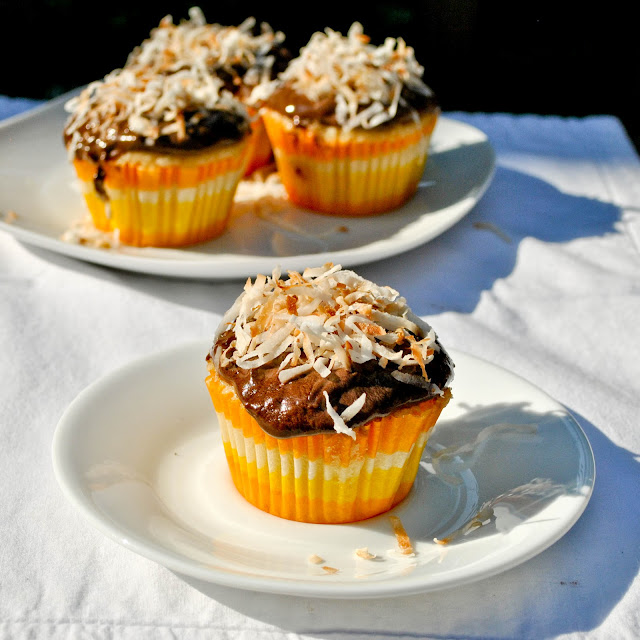 You may have noticed this blog has been sorely lacking in the cupcake department for awhile now. It’s not that I’ve been ignoring them on purpose.

I’m not a huge fan of cupcakes.

I know, I know. The horror!

Before you disown me, let me explain. You see, it’s not that I don’t like cupcakes. I actually think cupcakes are quite delicious and pretty darn cute too! And don’t think for a minute I wouldn’t scarf one down gladly if it were offered to me.

It’s just that I don’t really LOVE cupcakes. At least I don’t love them like I love pumpkin bread or cobbler or chocolate chip cookies or brownies. I like my desserts to be ready to eat when I pull from the oven.  Warm and gooey and ready to be popped into my mouth. Call it poor self control, lack of patience, or just plain weird, but I hate waiting for cupcakes to cool before I can frost and finally EAT them!

And since we’re confessing things I might as well tell you. These were supposed to be Yellow Butter Cupcakes with Blackberry Sour Cream Frosting.

I have been craving a fruity cupcake combo for awhile and when I saw blackberries on sale at our local store I knew exactly what I wanted. That decision lead to three fateful attempts at homemade Blackberry Sour Cream Frosting which involved 3 trips to the grocery store (one trip being totally wasted because they were out of blackberries! Ah!), several tubs of sour cream, and piles and piles of dirty dishes. I tried everything–adding powdered sugar, using less sour cream, adding cornstarch, heating the frosting on the stove–but every time I ended up with the same thing. Frothy, ultra sweet, purple-tinted goo.

Two adjectives you never want to have to use to describe your frosting? Frothy and goo. Not. appetizing.
I finally decided that far too much butter had been sacrificed for one frosting craving and gave up on the idea. (Although I do plan to revisit it once I’ve recovered from the ordeal. My next plan of attack: cooking the blackberries down into a thick sauce before adding to the frosting. Wish me luck!)

After facing defeat, I was in need of some chocolate. And lord knows I wasn’t going to be piping any frosting onto cupcakes after spending the better part of a day throwing buckets of failed frosting into the trash. No, I needed something rich, decadent, and messy. Something I could just plop on top of the cupcakes and eat…NOW.

And so the Double Chocolate Coconut Frosting was born. I can’t say I’m sorry for my misadventures, because these were downright fantastic. The yellow butter cake is wonderfully rich and fluffy. It comes together quickly and always bakes up like a dream (unlike Blackberry Frosting). It is my trusty, dependable, go-to recipe for classic birthday cakes.

And the frosting? Well, it’s just what this frazzled baker needed. Rich chocolatey flavor combined with sweet coconut. This isn’t a stiff frosting. It’s not a pipeable frosting. And it’s not super sweet. This is a lick straight off of the spoon, smother your cupcake, eat with a fork kind of frosting. In other words, it’s just the way I like it. One of my coworkers said it tasted like a Mounds bar on top of their cupcake. I’ll take that as a win. 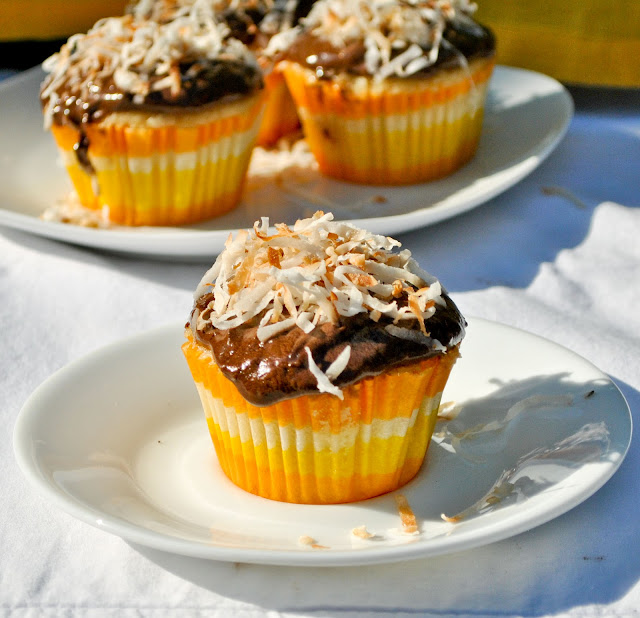 Do be warned, if you bring these babies to your next cookout, the sun will turn them into a melty mess in no time. There’s a couple things you can do to manage. First, store them in the fridge until you’re ready for them. Second, add a little more powdered sugar to make the frosting a bit firmer. And third, embrace the mess! Grab a fork and dig in! I don’t think too many people will complain about having to lick melted chocolate off their fingers.

I hope you all have a much less eventful journey on the road to delicious cupcakes!

For the cake:
1. Preheat the oven to 350 degrees. Line 2 standard cupcake pans with cupcake liners.

2. In a medium bowl, whisk together both flours, baking powder, and salt. Set aside.

3. In the bowl of an electric mixer, cream together butter and sugar, beating on high speed until light and fluffy. Beat in the eggs one at a time, scraping the bowl after each addition. Beat in the vanilla.

4. With the mixer on low speed, add about a third of the flour mixture to the egg mixture followed by half the milk. Beat on low speed until just combined. Repeat with another third of the flour and the other half of the milk. Add the last of the flour mixture and beat for about one minute on medium speed, or until fully incorporated. Divide batter among cupcake liners, filling each about 2/3 full. Bake in the preheated oven for 20-25 minutes or until toothpick inserted in center comes out clean. Allow to cool before frosting.

For the frosting:
1. In a small saucepan combine almond milk, coconut, rum, and vanilla. Bring to a boil over medium high heat, whisk in cocoa powder, then remove from heat. Cover and let steep for at least 10 minutes.

2. Meanwhile, in the bowl of an electric mixer cream together butter and shortening until light and fluffy. Stir in salt and semi sweet chocolate and beat until combined. Add 2 cups powdered sugar followed by 1 1/2 cups of the coconut mixture. Beat together. Add the final 2 cups of powdered sugar and beat until well combined. If desired, add the remainder of the coconut/milk mixture in small amounts or add additional powdered sugar until desired consistency is reached. I like the frosting to be sloppy, so I keep the powdered sugar at around 4 cups. For a stiffer frosting, add remaining powdered sugar. If desired, toast coconut in a pan over medium high heat until evenly browned. Top frosted cupcakes with additional toasted coconut. *Note: most of my taste testers said there was enough coconut in the frosting itself and preferred it without the additional on top. It does make them look pretty though. 🙂

Store cupcakes in the fridge. Allow to come to room temperature before serving.