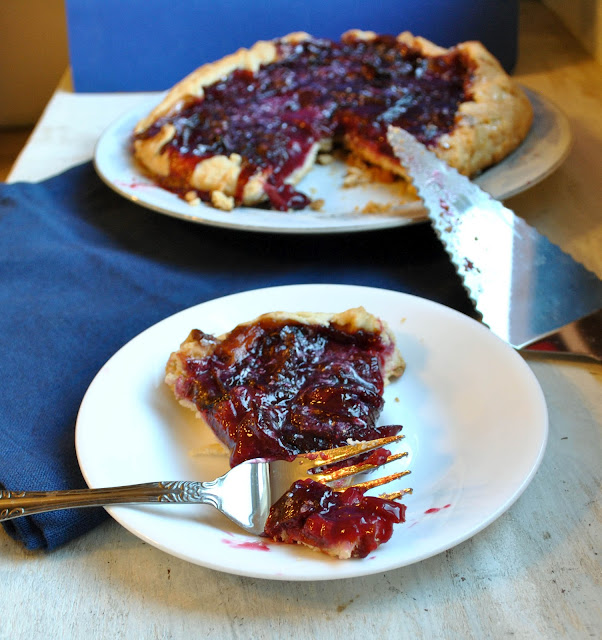 Did you know you actually have to pack in order to go on vacation?

I know, crazy right? I’m sure you wouldn’t be so air brained as to forget such an important fact. I, on the other hand, let is totally slip my mind.

We’re leaving for vacation tomorrow so I’ve been busy clearing out the fridge, doing laundry, making arrangements for the pup, and bathing suit shopping (ugh). I just happened to forget that whole–I-need-shampoo-and-underwear-if-I-plan-to-spend a-week-away-from-home–bit.

It’s about time for me to drag the dusty suitcases down from the top of the hall closet, so I hope you’ll forgive me if this post is short. I at least promise it’ll be sweet! 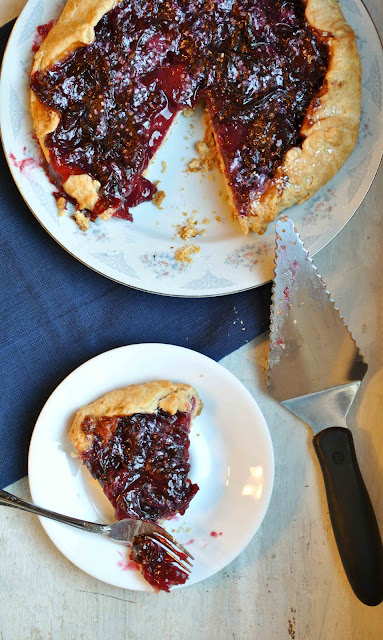 This week is National Pie Week and I just couldn’t let it go without posting this recipe for a Rustic Pluot Part. If you’re like me you thought “pluot” was the sound cartoons make when they fall off tall buildings and hit the ground. As it turns out, a pluot is actually a hybrid of a plum and an apricot. And it just so happens to be delicious.

This pie crust recipe is from King Arthur Flour. It comes together quickly, rolls out without tears (of the ripping or weeping kind), and is a nice balance between flaky and crumbly. Because this pie has to hold in the fruit filling without the aid of a pan, I used this sturdier, less fragile recipe for the crust.

The filling is simply fruit cooked down with sugar, vanilla, Amaretto, and spices. If you like an extra sweet filling, you may want to add a little more sugar. I prefer to keep mine tart so I can pair it with a scoop of vanilla ice cream.

If you can’t find pluots in the grocery store (we got ours through Green Bean Delivery), you can definitely substitute plums or apricots or use a mix of both in this recipe. Whatever you do, you won’t need to stress about this simple, pretty dessert. It’s as easy as…well…pie!

(There’s your dose of cheesiness for the day…you’re welcome). 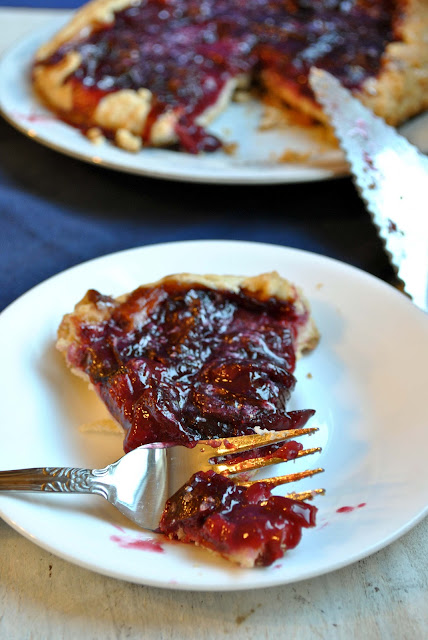 For the crust:
Refer to my Homemade Buttermilk Pie Crust Recipe.

For the fruit filling:
6 small pluots (you could also use plums, or a mixture of plums and apricots)
1/4 cup brown sugar
3 Tablespoons Amaretto
1 Tablespoon cornstarch dissolved in 1 Tablespoon water
1 teaspoon vanilla
Pinch salt

Directions:
1. For the crust, whisk together flour, buttermilk powder, salt, and baking powder in a medium sized bowl. Using a pastry cutter or two forks, cut in shortening and butter until mixture becomes crumbly. The mixture should be filled with small lumps of butter/flour.

2. Mix together vinegar and water and pour over flour mixture. Mix together using a fork. With your hands, pat the crust together until it forms one cohesive ball. If needed, add an additional Tablespoon or two of water to get the crust into a uniform ball shape. Flatten the ball into a disk, wrap in saran wrap, then refrigerate for at least 30 minutes.

3. Meanwhile, pit and slice the plouts. (Note: The best way I found for pitting the pluots was to cut into the pluot lengthwise until the knife hit the pit then circle around it’s circumference. Then, twist the two halves apart and use a knife to cut out the remainder of the pit, or simply pull it out with your fingers.)

5. Preheat the oven to 400 degrees. Take crust out of the fridge. Using a floured rolling pin, roll the dough out on parchment paper to about 10-11 inches around. Brush surface of the crust with milk. Layer pluot mixture in the center, leaving at least a 2 in perimeter all the way around. (As you can see, my pie was very full. If you would like the crust to cover the fruit more, take about 1/2 cup of the mixture out and eat it separately with ice cream or yogurt.) Using your fingers fold the crust in around the pie, pinching the seams together. Wetting your fingers a bit may help you get a better seal on the crust. Transfer parchment paper to a baking sheet and bake at 400 degrees for 15 minutes. Turn heat to 350 degrees and continue to bake for another 40-45 minutes or until crust is golden brown.