Layers of coffee and rum soaked brownie and fluffy mascarpone filling make up these irresistible, luxurious Tiramisu Brownie Parfaits. Warning: along with my favorite dessert of all time, this post also contains lots of schmaltz and sentiment and maybe even a kissing photo. Don’t tell me I didn’t warn you. 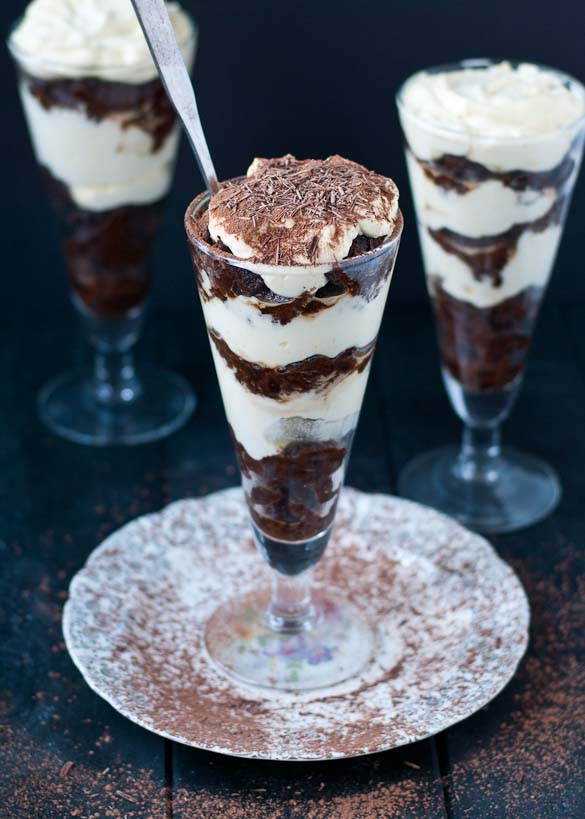 While it might not be a conventional choice, it’s one of the things I love most about the Mr. He’s not afraid to let his inner child out. I know left to my own devices I would become a rather boring adult. Caught up in mortgages, bills, and Responsiblity, I’d likely spend my evenings watching Wheel of Fortune, reading the paper, then turning in at 8 PM. But with the Mr. around, I know life will never be boring. We may grow old together, but I know with him by my side, I’ll always feel young at heart.

Today I want to take some time to celebrate this guy. My guy. The guy who has supported this crazy blogging endeavor from day 1. The guy who has put up with late nights and tripping over tripods and piles of dirty dishes. The guy who has encouraged me to take risks, pursue what I love, and get better every single day.

This is the man who asks for Legos for Christmas. The one who works hard every day to provide for our family. The one who has seen multiple house renovations through to their (painfully long, expensive) end.

The one who put Nerf guns on our wedding registry. 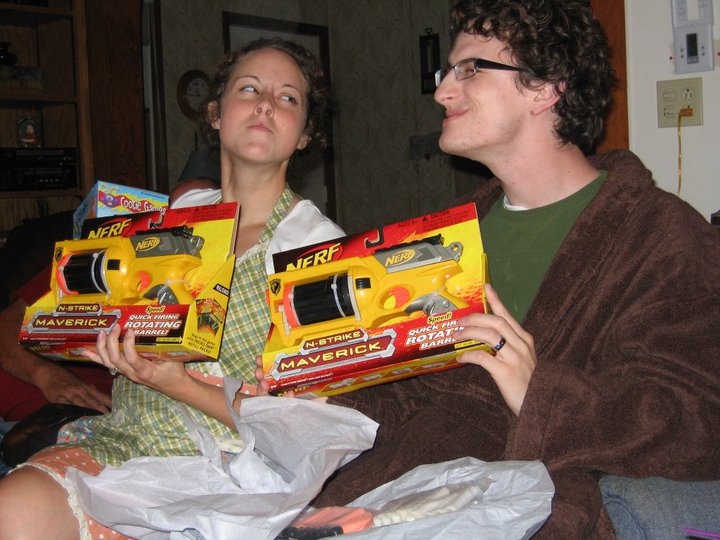 The one who cheers for the Buckeyes and sits in big chairs for our annual Fruit Farm Photo. 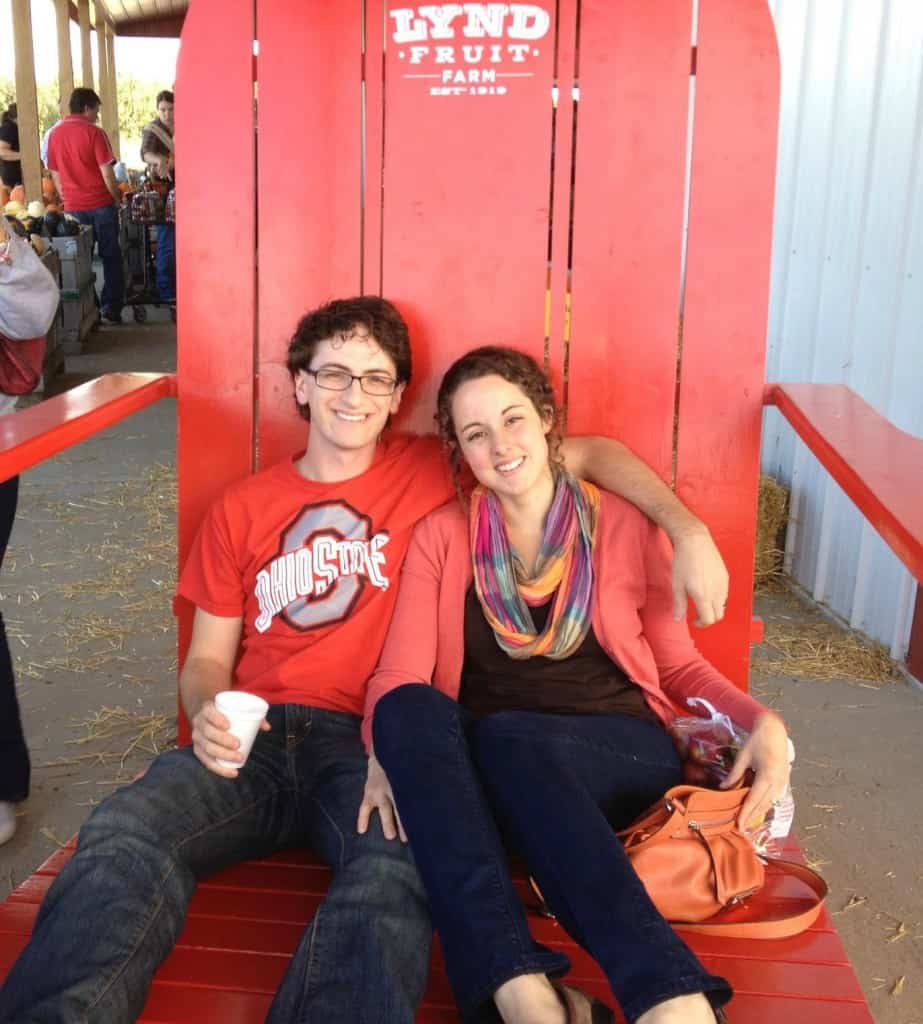 The one who loves mini horses. 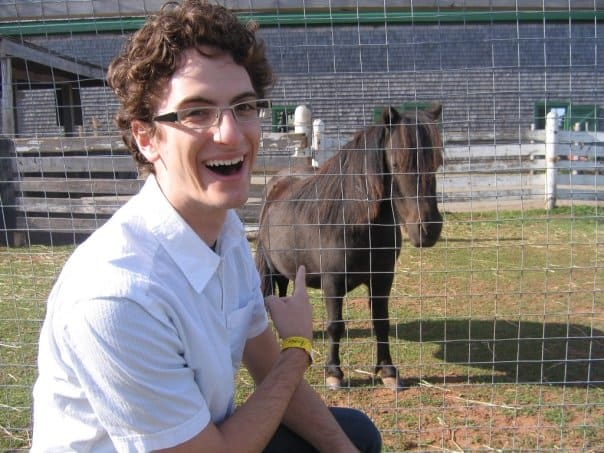 The one who knows one doesn’t simply “go to a neon party.” You OWN the neon party. 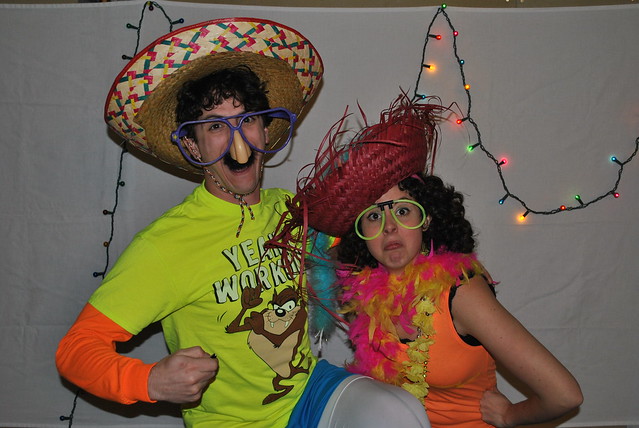 The one who I can’t wait to grow young with. 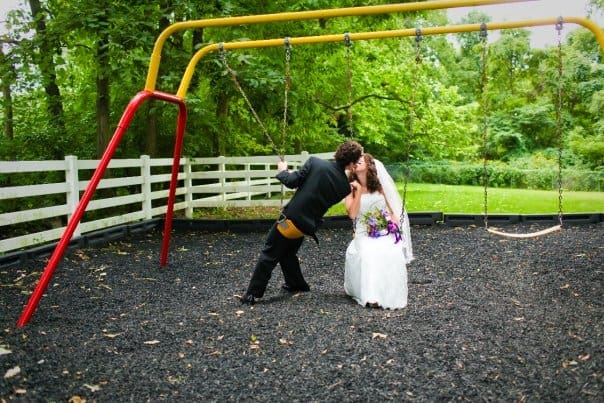 The one who loves tiramisu and brownies.

When I was deciding what to make for the Mr. I immediately settled on tiramisu. But then I remembered his affection for dark, chewy, fudgy brownies, and suddenly the choice became clear. I needed to combine his two favorites into one epic Tiramisu Brownie Parfait.

Guys, this might be THE BEST DESSERT I’VE EVER MADE.

Yes, the capitals were necessary. I estimate I probably have around 100 dessert recipes on this blog. And I’m a big fan of all of them.

But these were crazy good. Like, stop you in your tracks good. Like, can’t stop eating them good. Like, hold the phone, stop drop and roll, I-discovered-the-meaning-of-life good.

Coffee soaked brownie sandwiched by layers of fluffy, creamy mascarpone filling. It’s cake meets pudding meets heaven….in a glass. It turned out to be much easier to make than I anticipated and the combination is incredible. As it sits the brownie and filling become one rich, decadent layer of chocolate espresso cream. I want to sleep on clouds of that mascarpone filling. 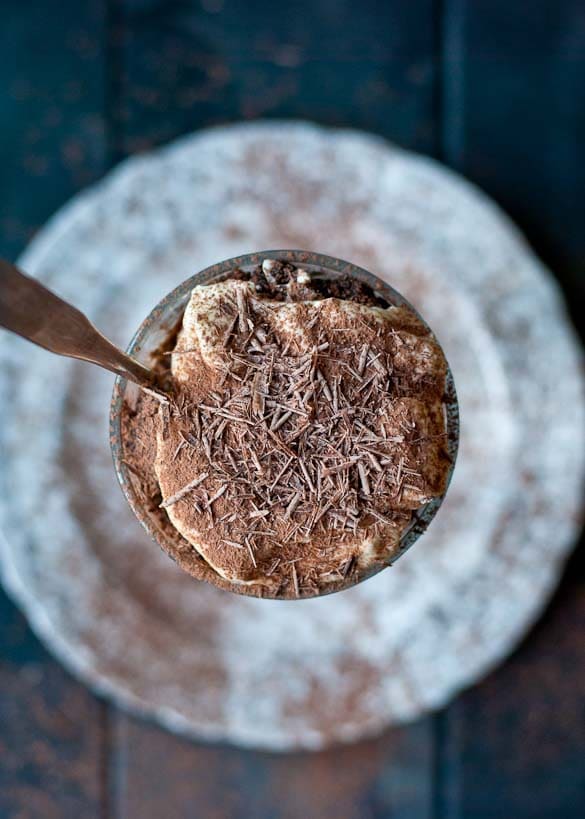 I’ve included some step by step instructions and photos below the recipe to make it super easy to follow. Because I don’t want there to be any excuse for you not to make these. Seriously, go do it. Readyyyyyy….? NOW!

For the mascarpone filling:

Step by Step Instructions and Pictures:

This recipe starts with a box brownie mix, because hello?! EASY. I replaced the water with rum and added a teaspoon of espresso powder. Other than that, you just follow the instructions on your brownie mix. Usually something like dump, stir, pour, bake. Super simple!

While the brownie is cooking you can whip up the filling which is made of egg yolks, sugar, mascarpone, and whipped cream.

Start by placing the egg yolks, sugar, and rum in a double boiler or heat proof bowl that fits over a simmering pot of water. 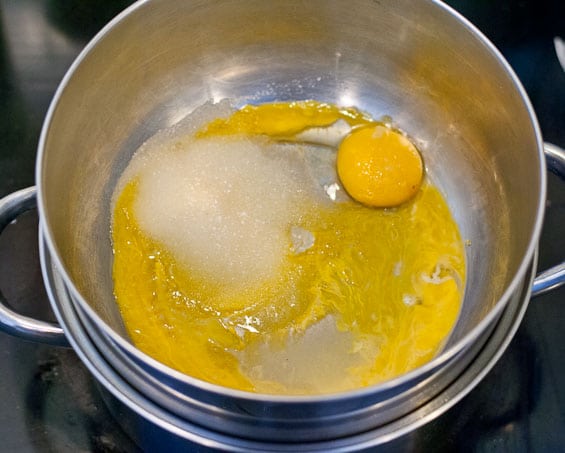 Whisk together the yolks, sugar, and rum, and allow it to cook, whisking constantly, until it becomes smooth, creamy, and a pale yellow color. 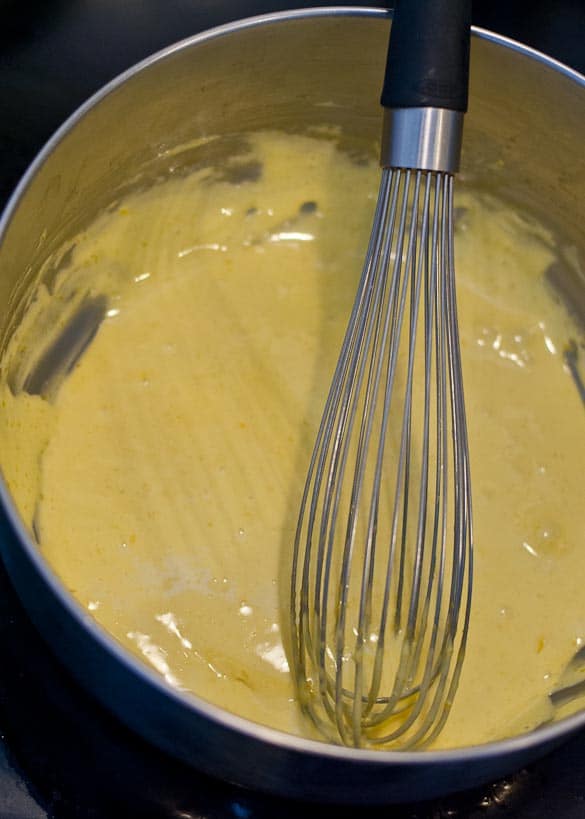 Remove the egg mixture from heat and stir in the mascarpone cheese.

Meanwhile, whip your whipped cream. Place the cream in a clean, cool bowl and beat it using electric beaters or the whisk attachment of a stand mixer. I usually start the mixer on medium speed and once the cream is thickened enough not to splatter, I’ll crank it to high. Beat until the cream is thick. It should hold it’s shape and cling to the beater. 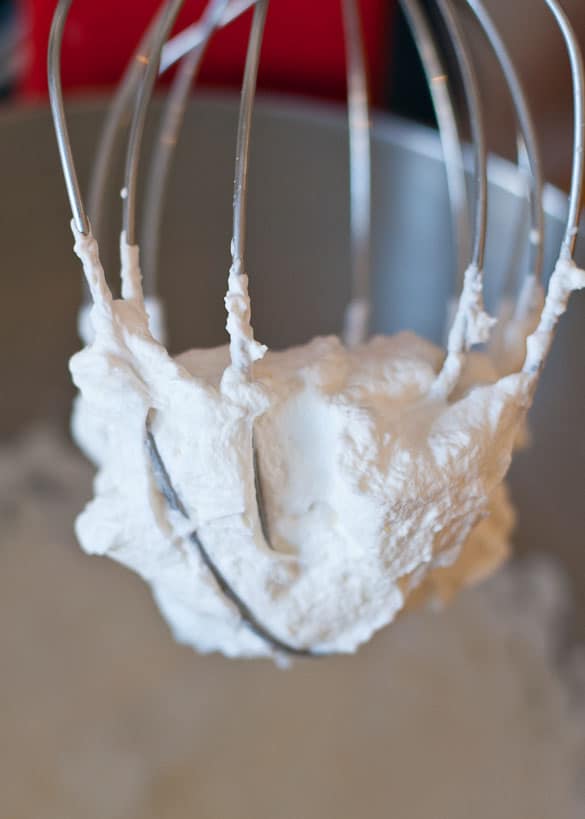 Whisk the cream into the mascarpone/egg yolk mixture. The cream will likely deflate a little. Don’t worry about it. 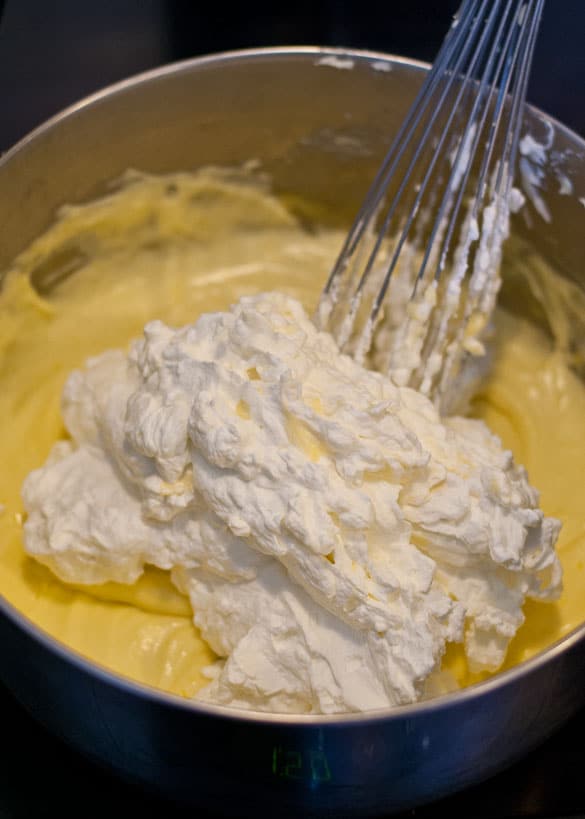 From there, it’s all just assembly. Whisk together a cup of coffee and a few Tablespoons of rum. Break the cooled brownies into small chunks, dip them in the coffee rum mixture for just a second or two, then place them in the bottom of a glass. (You can also feel free to assemble this in one 9 x 9 inch square pan. Follow that up with some of the cream filling. Add more brownies, then more cream. And repeat one more time. Finish with a sprinkling of cocoa powder and chocolate shavings. Devour in excess. Repeat. 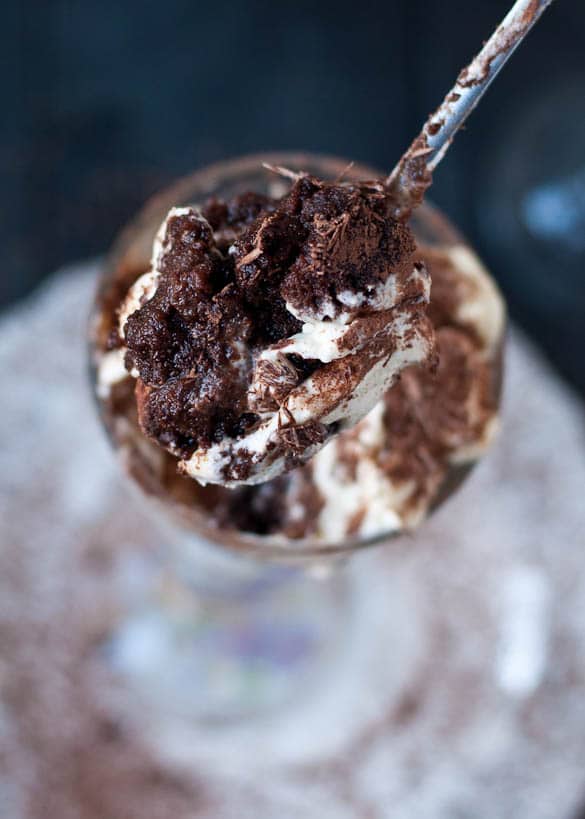