It is NOT already September. Okay? We’re not even going to talk about it. We’re just going to pretend these are June leftovers and move along. Good?

This month I’ve got a lot of serious Internet reads, for what was, in my mind, a pretty serious month. Isis militants, a war over Gaza, a crisis of migrant children fleeing violent nations, and, right in our backyards, the killing of an unarmed black man and rioting in Ferguson. I’ll be honest, it wasn’t fun reading this stuff. I spent a lot of hours crying over these stories. But I believe it’s so important to take the time to stop, listen, take note, and grieve. As Sarah Cunningham said in her post, “If we allow geographical distance to detach ourselves from their journey; if we choose to avert our eyes and remain silent, we will only be subtly inviting these tragedies to continue to happen…and making room for the next injustice to explode into our own communities.”  So in the spirit of taking notice, of moving the suffering from the margins to the focus, I’m sharing a few of the reads that impacted me this month.

America Is Not For Black People  on The Concourse- “By all accounts, Brown was One Of The Good Ones. But laying all this out, explaining all the ways in which he didn’t deserve to die like a dog in the street, is in itself disgraceful. Arguing whether Brown was a good kid or not is functionally arguing over whether he specifically deserved to die, a way of acknowledging that some black men ought to be executed. To even acknowledge this line of debate is to start a larger argument about the worth, the very personhood, of a black man in America.”

Racial Bias, Police Brutality, and the Dangerous Act of Being Black from Rage Against the Minivan

A glimmer of hope in the midst of the chaos AKA how treating people with dignity and respect can transform a situation.

And for an extensive list of excellent reads on the incident, check out Further Up and Further In’s Ferguson and Michael Brown Required Reading List

In Which God Is Transforming the World by Sarah Bessey

If I had clean clothes I think people would treat me like a human being.”  Check out The Laundry Love Project to see if there’s a location near you.

“I feel that the time is always right to do what is right.” –Martin Luther King Jr. from his 1965 Playboy interview– I don’t know how I had never read this interview before, but it applies as much to us today as it ever did.

I don’t know what it was about Jen Hatmaker’s “A Note To My Former Self ” but it hit me at exactly the right time. Especially this quote: “This is the beginning of the rest of your life. Embrace it all – all the struggle, all the tension, all the humility, all the beauty. It is safe to be faithful to a faithful God. He loves you and is for you. He loves this world and is for it. Put that YES on the table indefinitely and, seriously, go with God.”

And finally, something funny. No, hilarious:

Meteorologist works out some personal issues during weather forecast. I don’t know if I’ve laughed out loud this much from an Internet article ever. Seriously. Especially this. >> “It’s going to feel like you’re wearing a sweatshirt made out of Alfredo sauce. You’re going to hate it.” 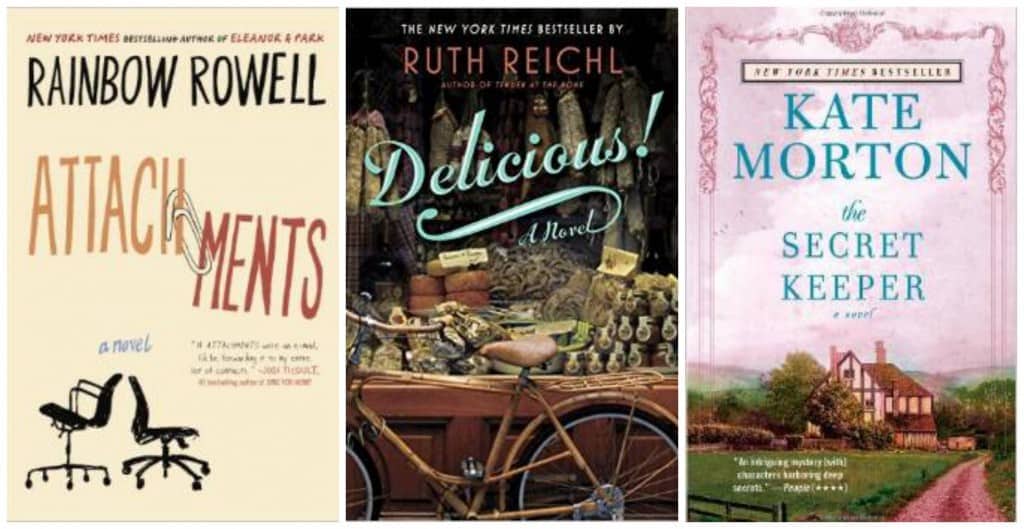 I know this post is already very reading heavy, but I couldn’t help but share what books I’ve been reading this month.

Attachments was a quick, easy read with lots of quirky humor and jokes about the 90s (think Titanic, preparing for Y2K, and dealing with people who don’t know how to use email). Most of the book is written in email correspondence between two of the main characters. All in all, nothing life changing, but I enjoyed the characters and thought it was fun for something different..

Delicious! was a foodie novel, and like Attachments, it was a pretty quick read. I enjoyed it, but the plot line was a little fantastical for me, and I never felt like I developed a connection to the characters. In fact, I completely forgot I even read this book until I went back through my Kindle to see what I read this month. Fun, but forgettable.

Right now, I’m smack in the middle of The Secret Keeper. I’ve heard so many good things about Kate Morton’s The Forgotten Garden, but since I’m number 32eleventyninehundred on the waiting list for it, I decided to pick up The Secret Keeper instead. I will give it this, I was captivated immediately, but at the halfway point I feel like the book is dragging. I’m ready for some answers…and quick. But we’ll see how I feel once I finish it…stay tuned for the full review next month!

In other news, though I’m not admitting August is ending, I am getting excited for football season to start up again! I’ve been pinning like crazy to my Tailgating Pinterest Board.

And I guess if you must, you can check out my Autumn Inspired Recipes Board if you simply cannot handle another day without looking at ALL THE PUMPKIN DESSERTS.

Oh, one other thing! Have you guys seen Chef yet? It is fabulous! Lots of juicy food shots, great characters, humor, and heart. I absolutely loved it. Of course, I’m also already geeking out about the release of the new Hunger Games movie in November, but while I’m waiting for that I’m hoping to check out Boyhood, Let’s Be Cops (I know, I know), and If I Stay (I know, I know, again).

Alright, I want to hear from you! Have you read any good books this month? Seen an awesome movie (or a bad one–you can save me from making the same mistake!)? Discovered a new band? Send them my way because I want to hear em!

This post contains Amazon affiliate links. If you click a link and make a purchase on Amazon, a small percentage will come back to support the ongoing costs of this website. Thanks for supporting Neighborfood!