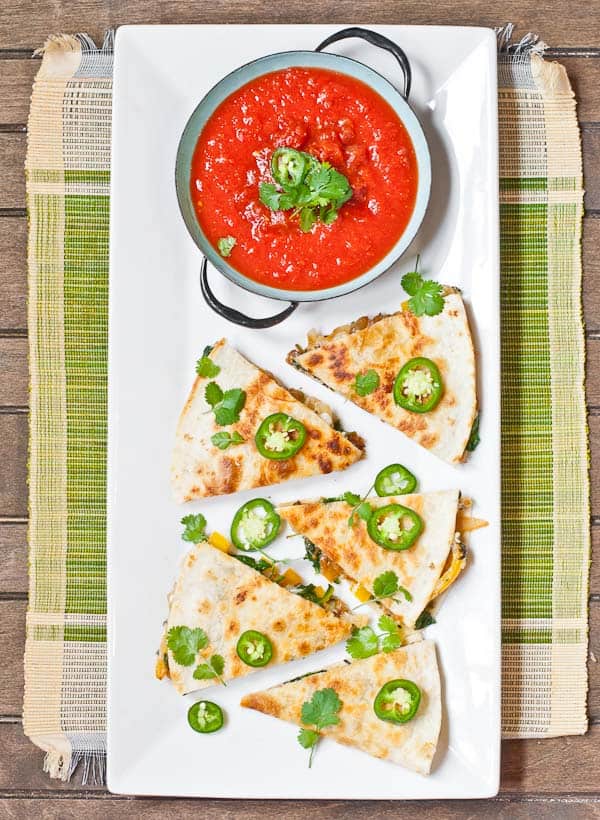 I have a confession to make. There’s a good reason why there’s only one other quesadilla recipe on this site. It’s because I was terrified to make them. It wasn’t the components of the quesadilla itself. I can sprinkle cheese with the best of them. No, what sent shivers up my spine was the moment, that precipice from which there is no return, when you have to flip the quesadilla over and grill the other side.

I’m sure you’ve all been there before. Strategizing about the perfect placement of your spatula. Trying to hold the thing together with your hand and also avoid burning your knuckles off. And we’ve all experienced that horrifying moment when it all falls apart. The top tortilla shimmies to the left, exposing a jumble of cheese, onions, and peppers. You’re left trying to put the pieces back together, shoving everything back in place and being glad this isn’t the night you decided to invite company over. 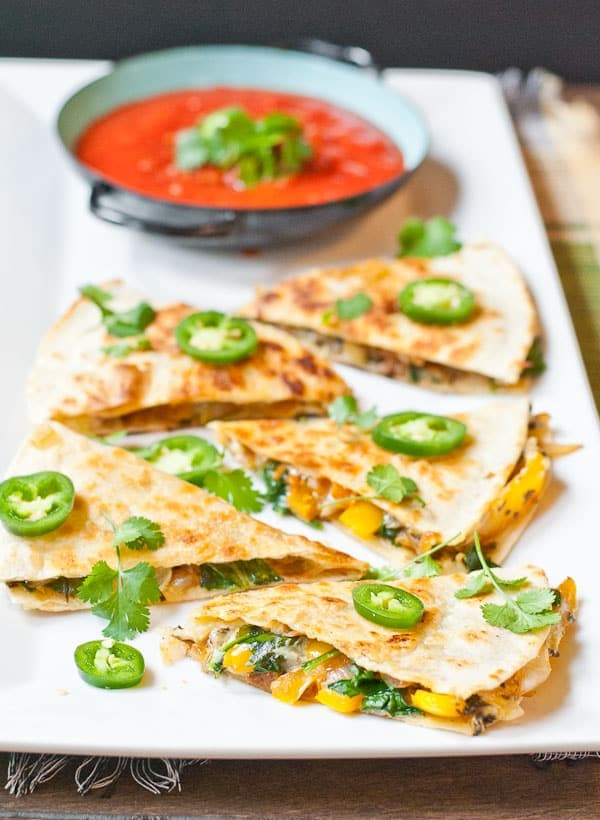 Sure, the vegetarian quesadilla tastes great despite its disheveled appearance, but that mess could never be photographed and shared on a food blog. And what about the stress? I could hardly ask my readers to endure that kind of trauma.

So I abandoned the quesadilla. I let it go, set it free, moved on.

Until I read a simple tip that changed everything. Instead of flipping, simply layer the toppings on only half of the quesadilla and then fold the other half on top. It seemed so obvious after I read it. Of course that’s how you should make quesadillas! Sure, it doesn’t give you the iconic circle, but it also doesn’t give you a blood pressure spike and an unidentifiable pile of mangled cheese and tortilla. 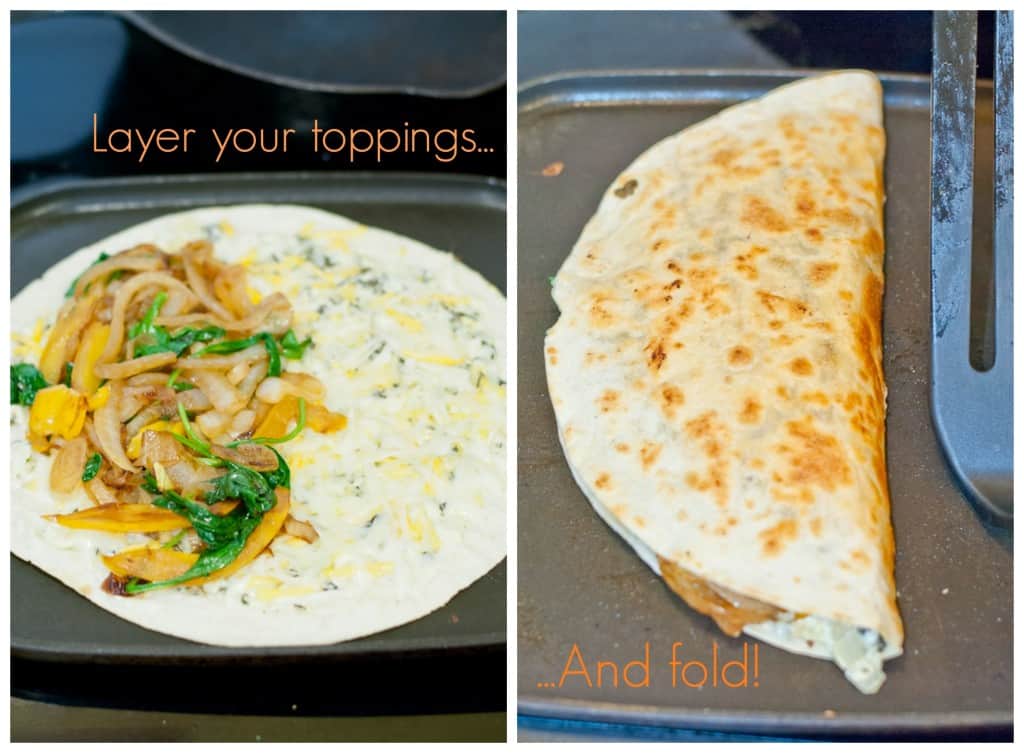 So I’ve revisited the quesadilla, and I’m happy to say it’s now a part of our regular repertoire. I now consider it a quick and easy weeknight meal we can make with whatever happens to be in the fridge at the time.

Luckily, this time around I had some of La Terra Fina’s dips in my fridge. La Terra Fina has an entire line of spreads and dips, with tasty creations like Chunky Spinach Artichoke and Parmesan and Wild Smoked Salmon Dip. I have yet to try one I wasn’t addicted to. They’re great for dunking your veggies, a cracker, or the closest spoon, but lately I’ve been incorporating them into my recipes as well. 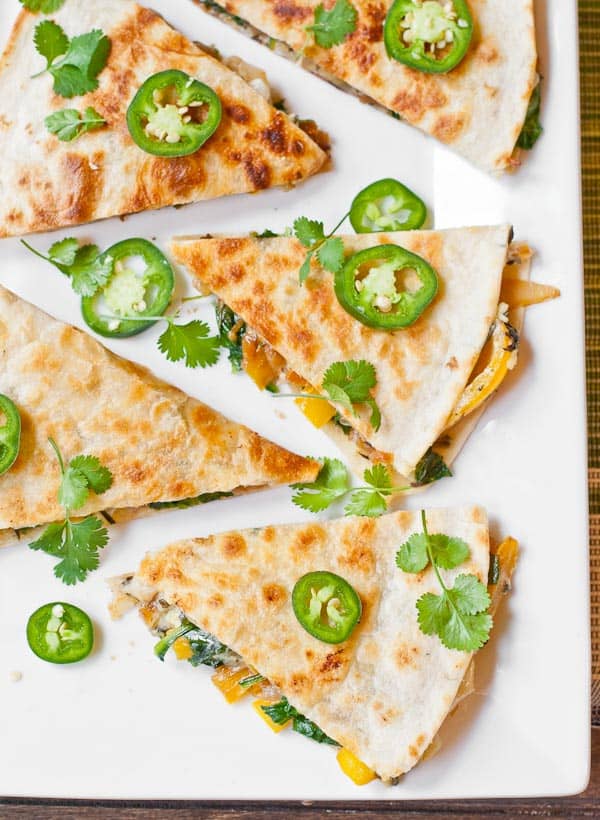 For these vegetarian quesadillas, I tried both the Greek Yogurt Spinach Artichoke Dip and the Chunky Artichoke and Jalapeno. Both were great, but I have to say I’m partial to the Jalapeno Dip for these. I just can’t resist the subtle kick of heat. But if you’re looking for a lightened up option, the Greek Yogurt Dip is a great way to go. Both will make these veggie quesadillas a creamy, melty sensation for your tastebuds.

The process for these is fairly simple. I added a hodge podge of veggies from my fridge for these, and caramelizing them was definitely the right decision. The caramelized vegetables take about a half hour, but once those are golden and sweet, you can have the rest of this whipped up in about 20 minutes. Simply spread the entire tortilla with the dip of your choice and sprinkle with cheese. Then, spread the veggies on only half the tortilla. 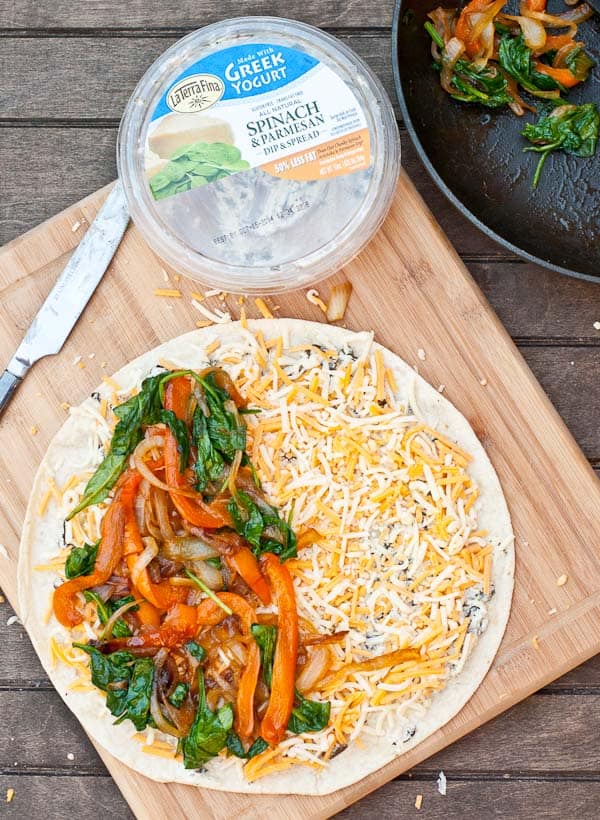 I use just a little bit of butter in the skillet so the tortillas don’t get soggy. Once you place the tortilla in, you’ll want to keep an eye on the cheese. Once it’s melty, you’ll flip the cheese side over the veggie side, use a spatula to press the cheese to the perimeter and seal the edges, then remove it to a plate. And there you have it, stress free, no mess vegetarian quesadillas. 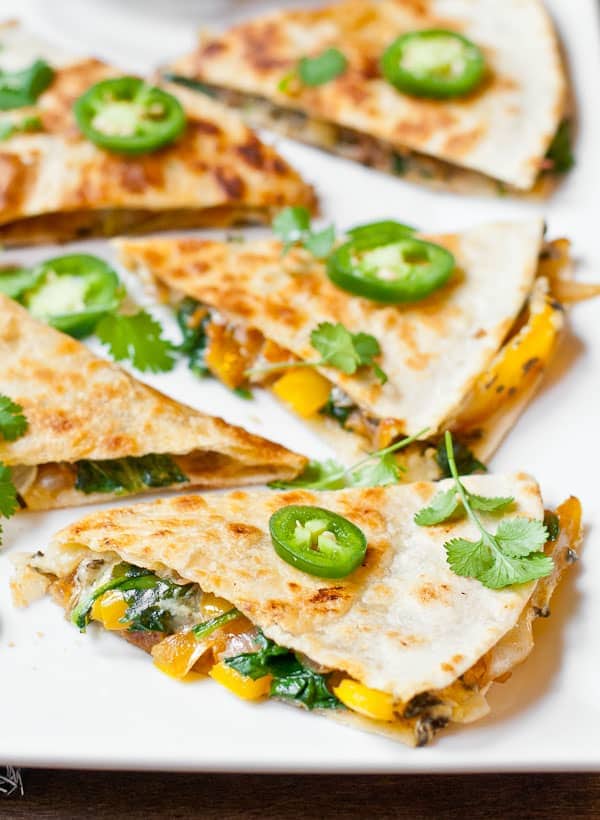 One other reason I’m sold on this method is because it makes the perfect serving size for one person. This way, you can switch up the dip, the cheese, or the topping based on what people like. It’s a win for everyone! (But especially for your stress level).

If you’re interested in learning more about La Terra Fina, check out their website and grab one of their dips at a store near you.  And if you like mushrooms, check out my other great Vegetarian Quesadillas.

Yield: 4 Serving Size: 1
Amount Per Serving: Calories: 250
Please note nutritional information for my recipes is calculated by a third party service and provided as a courtesy to my readers. For the most accurate calculation, I always recommend running the numbers yourself with the specific products you use.