This Dirt Pudding brings joy wherever it goes. It’s a favorite of kids and adults alike! 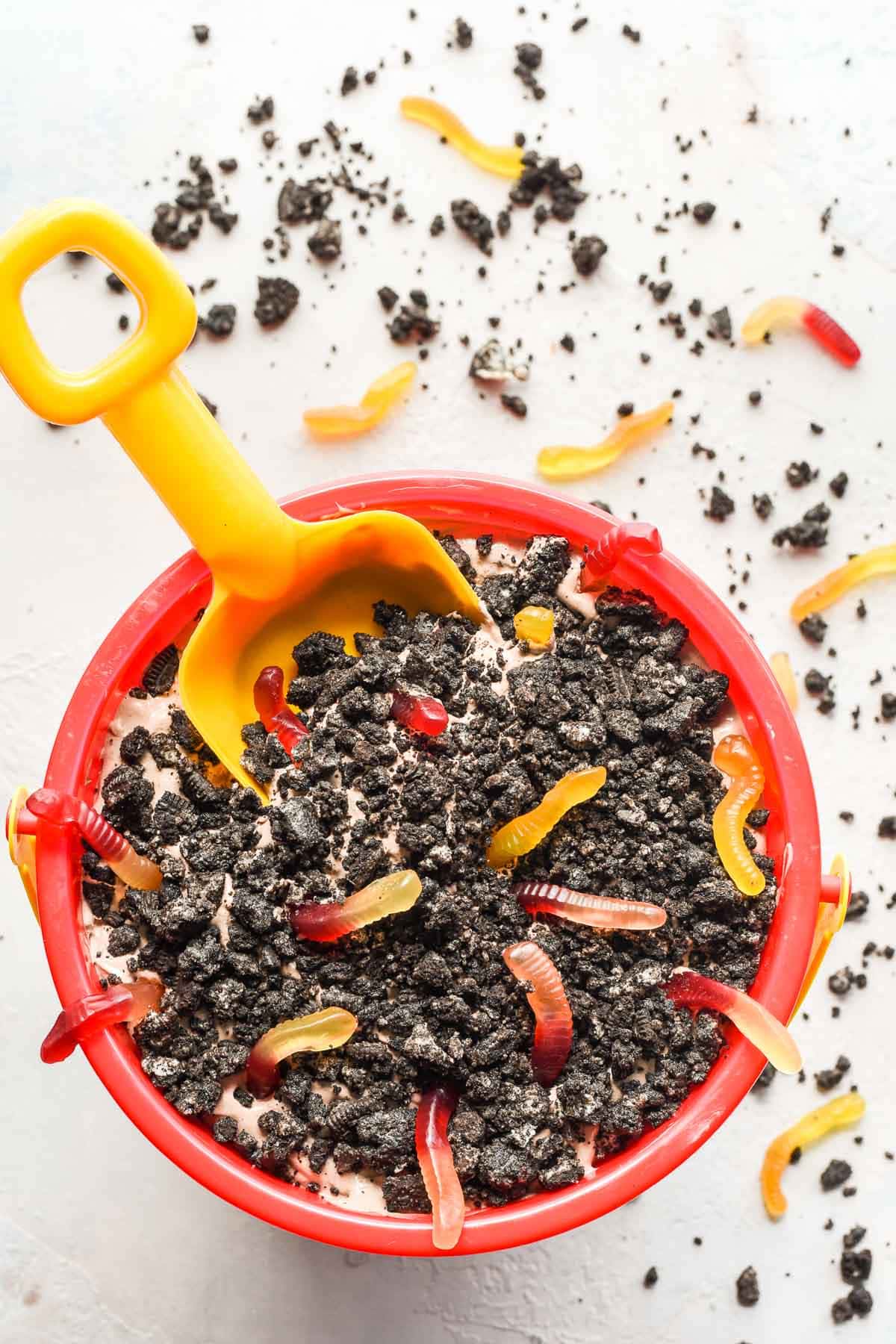 If given the choice, the Mr. ALWAYS picks this Dirt Pudding over any other dessert. It doesn’t matter what the competition looks like. It doesn’t matter if it’s the creamiest, most decadent, fudgiest, prettiest dessert on the planet. The Mr. will choose this. In fact, I’ve stopped bothering to ask.

If I want to try a new recipe for a dessert, I better just do it (or hope that I don’t have the ingredients for Dirt Pudding on hand so I can weasel my way out of it). It’s not that he doesn’t like other desserts. It’s just that he LOVES Dirt Pudding.

And truthfully, I can’t blame him. I mean, really, what’s not to like? Loaded with Oreos, pudding, cream cheese, and Cool Whip, this simple Oreo Dirt Dessert is bound to be a crowd-pleaser. Plus, the gummy worms make it actually resemble real dirt. Appetizing right? I mean who wouldn’t want to eat a heaping helping of worms in dirt with a tiny shovel? 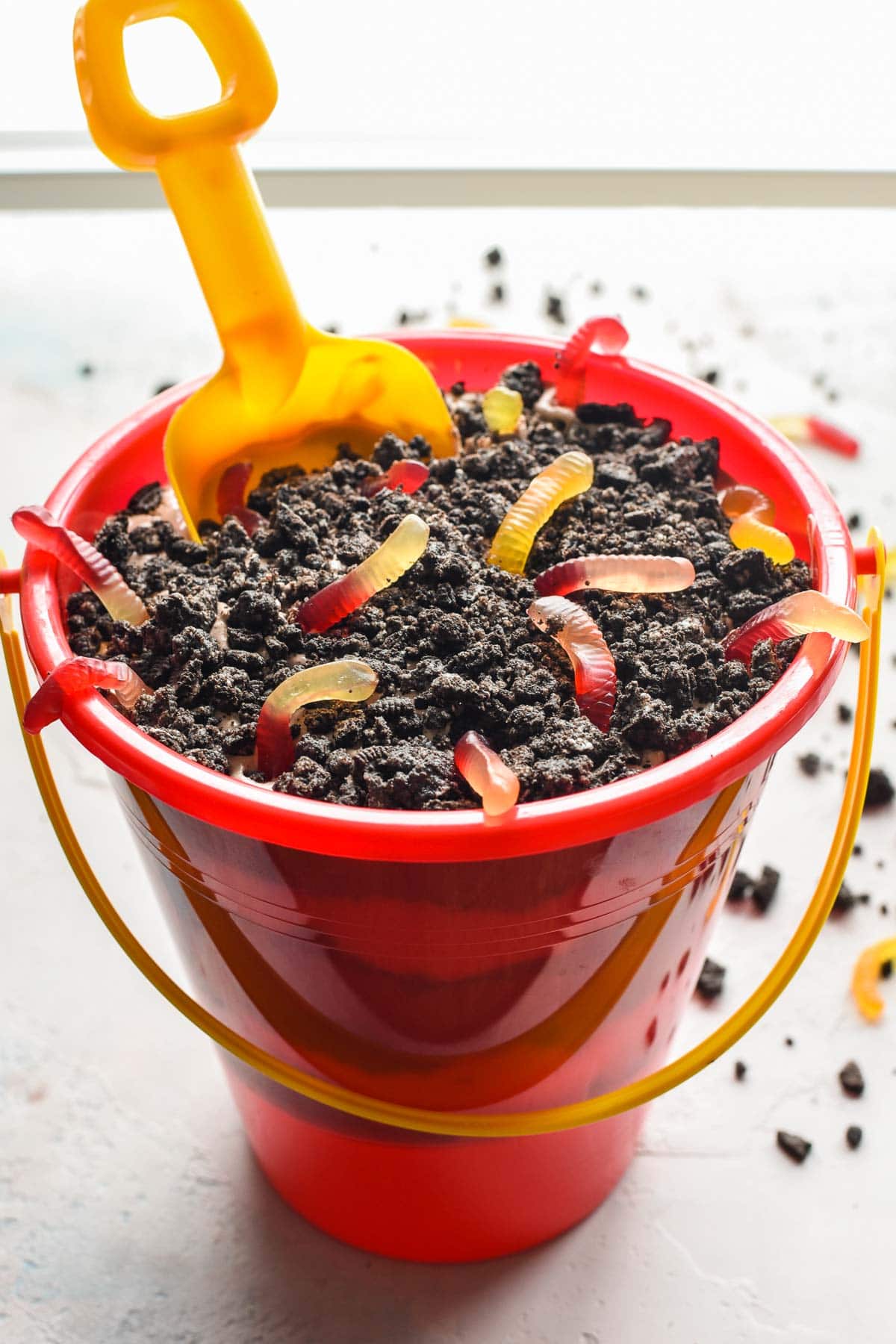 Worms In Dirt: A Childhood Favorite

While I like to tease the Mr. about his undying affection for Dirt Pudding, I’m awfully fond of it myself. It was a childhood favorite and continues to be the most popular dessert at any potluck. Nothing makes you feel like a kid again quite like slurping gummy worms out of your dirt dessert until your face is covered in pudding splatters. Plus, it’s a cinch to whip together a quick bucket of dirt and worms for an impromptu party dessert.

Sure, you could do things the hard way with homemade pudding and freshly whipped cream. Heck, you could even make your own Oreos. But really, the joy of this recipe is in the ease of its assembly.

Plus, you can change up the pudding combinations based on your mood. My favorite is a mixture of milk chocolate and french vanilla. The Mr. prefers all fudge chocolate pudding. I’ve tried cheesecake and mint combinations before too. 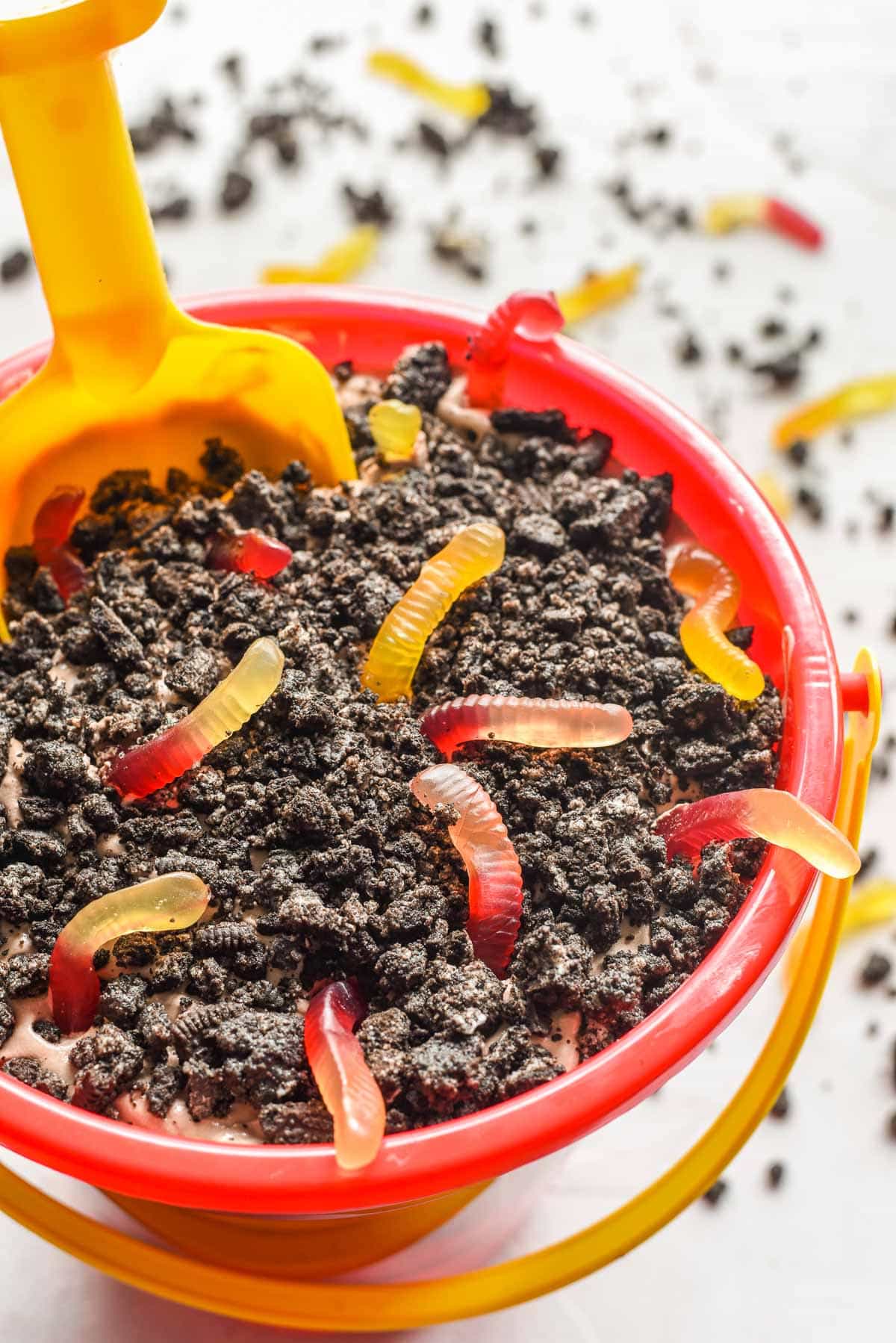 Dirt And Worms For A Down To Earth Theme

I made this especially for my son’s farm themed second birthday, so serving this in a pail with lots of gummy worms on top (and a tiny toy tractor) was a must. The worms are also perfect for a Halloween party, although you might want to trade the pail for a fun and festive flower pot or a plastic pumpkin. You could even add some “graveyard” decorations like in these Halloween Cheesecake Parfaits. However you make your Oreo Dirt Pudding, it’s sure to be a hit!