These Amish Apple Fry Pies are irresistible. The filling is simple with just a hint of spice. The crust is tender and flaky and just a little crunchy. And the glaze? It dries into a crackly sweet coating that seals in all the goodness. 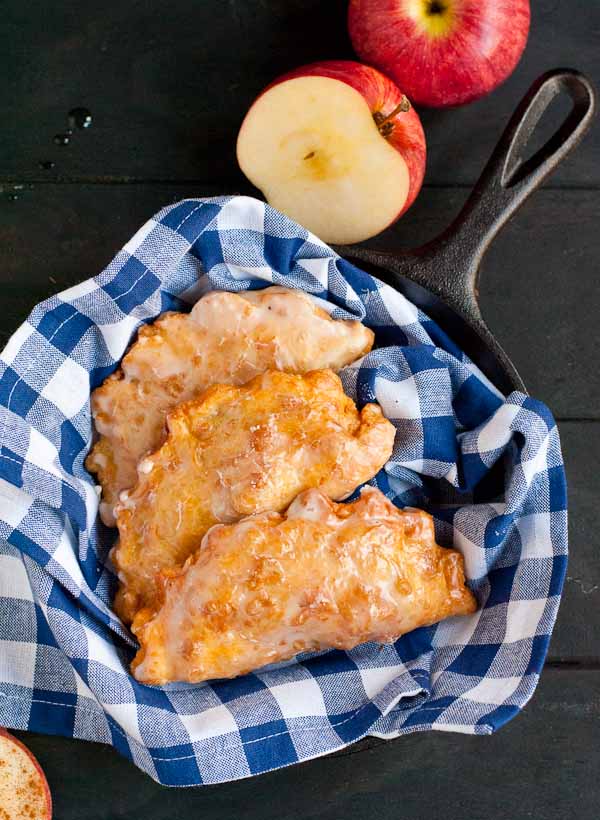 If it weren’t for the Mr. I would definitely be the creepy lady on the block passing out homemade Amish Apple Fried Pies to the Trick or Treaters. I know we’re taught to give anything that doesn’t come in a plastic wrapper the suspicious side eye, but you have to admit, these pies beat out piles of Tootsie Rolls and Jolly Ranchers any day.

Perhaps it’s old fashioned of me, but I feel a little sad my Apple Fry Pies would most likely cause parents to hustle their children away from my door step. I mean, how great would it be if Trick or Treating actually involved receiving fresh baked goods from all of your neighbors?

Instead of mini candy bars and Laffy Taffy, your children would come home with warm chocolate chip cookies, gooey Rice Krispy treats, and fudge brownies. Rest assured, I would swallow every ounce of dignity I have and take my 27 year old self to the streets for some treating of my own.

I suppose I’ll avoid a lawsuit and some stern looks if I keep these Apple Fry Pies away from the little Trick or Treaters, but that doesn’t mean I can’t share them with all of you! If I could, I’d ship you all your very own pie. No creepiness about that, right? 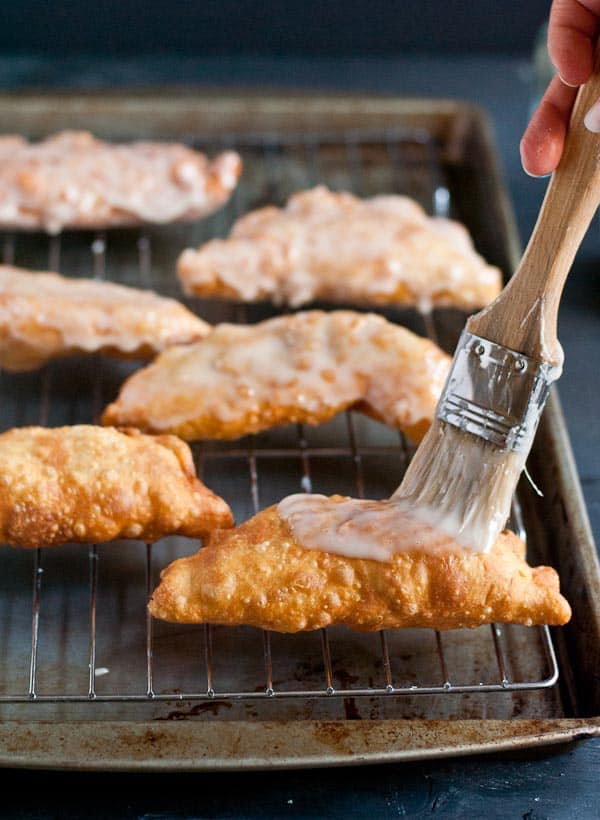 If you’ve never heard of a fry pie before, they’re pretty self explanatory. Pie crust is wrapped around a fruit or cream filling then fried and glazed. In some places they’re called fried pies, but at the Amish bakeries I’m familiar with, they always go by fry pies.

I don’t think I need to explain why these are so popular. They’ve got a lot going for them. First, PIE.  Second, FRIED pie. Third, HANDHELD fried pie. And fourth, GLAZED handheld fried pie. If there were an Amish state fair, these would be the signature dish (except maybe they’d be on a stick). 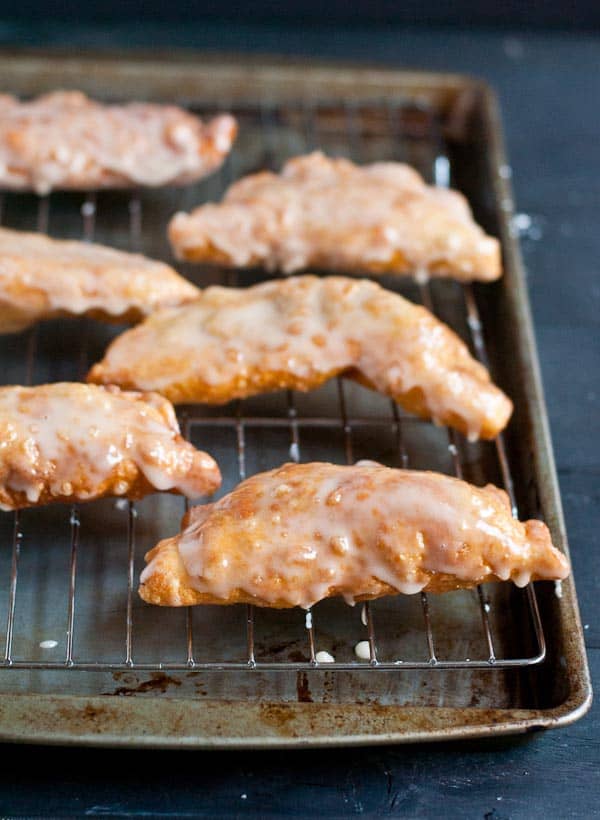 For my first foray into fried pies, I decided to go with a classic, seasonal favorite–apple. This filling is simple with just a hint of spice. The crust is tender and flaky and just a little crunchy. And the glaze? It dries into a crackly sweet coating that seals in all the goodness. 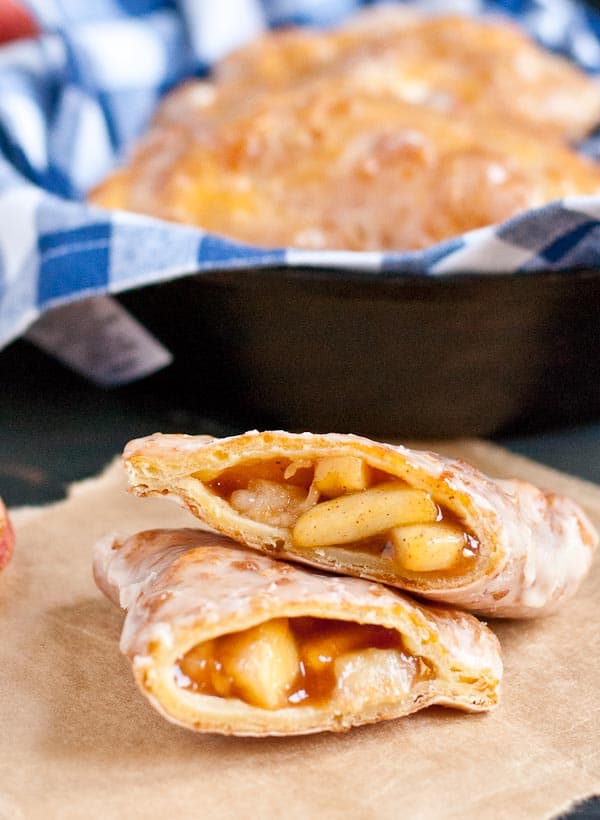 Now imagine yourself being able to take the sweet, familiar, homey flavors of apple pie wherever you go. The portability of these means you can grab them for breakfast, eat them in your car (not responsible for any eyes-rolling-back-in-head accidents), pack them for a late-Autumn picnic, or one hand them while you fold some laundry. Actually, that last one may not be true. Test at your own risk.

Wherever and however you choose to eat these, they’re sure to be a hit. Except maybe on Halloween night. Don’t be the creep. Use the Snickers instead. 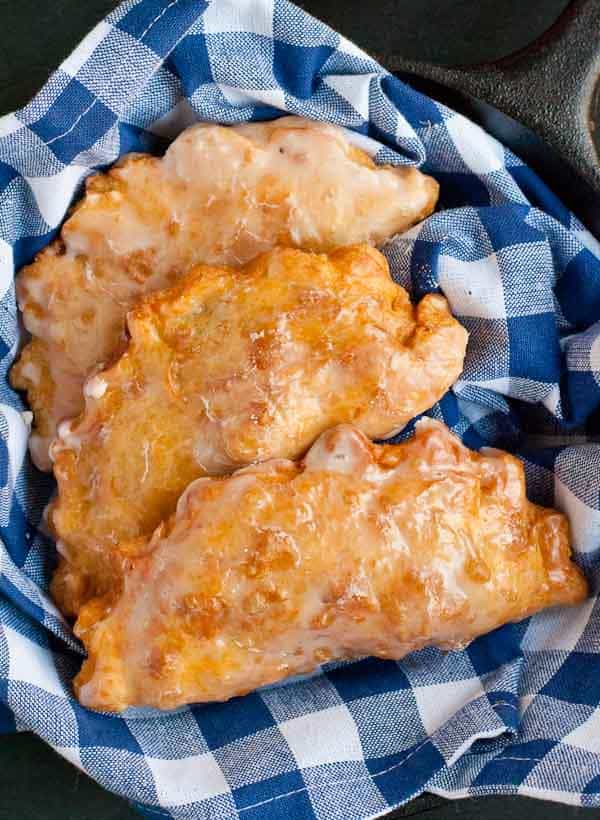 If you’re looking for more awesome Amish recipes, be sure to check out my Amish Chicken and Noodles and Homemade Amish White Bread!

Wondering what to do with those extra egg whites? Check out my collection of over 50 leftover egg white recipes!