I figure it’s only appropriate to kick off the new Love the Locals feature with one of the very first Columbus originals I grew to love. When the Mr. and I first moved here, we lived in a city called Whitehall. I suppose technically it’s a suburb of Columbus, but to this country girl it felt very much like the big city. I was thrilled to be within 5 minutes of a Kroger, walking distance of a Target (although this proved to be entirely too tempting for newlyweds on a budget), and surrounded by so many new restaurants to try.

King Gyros was about a 5 minute drive from our tiny little apartment, and once we discovered it, let’s just say we found more than a few excuses to return. I had very little previous experience with gyros (sad childhood, I know), and this introduction was better than I could have ever imagined. 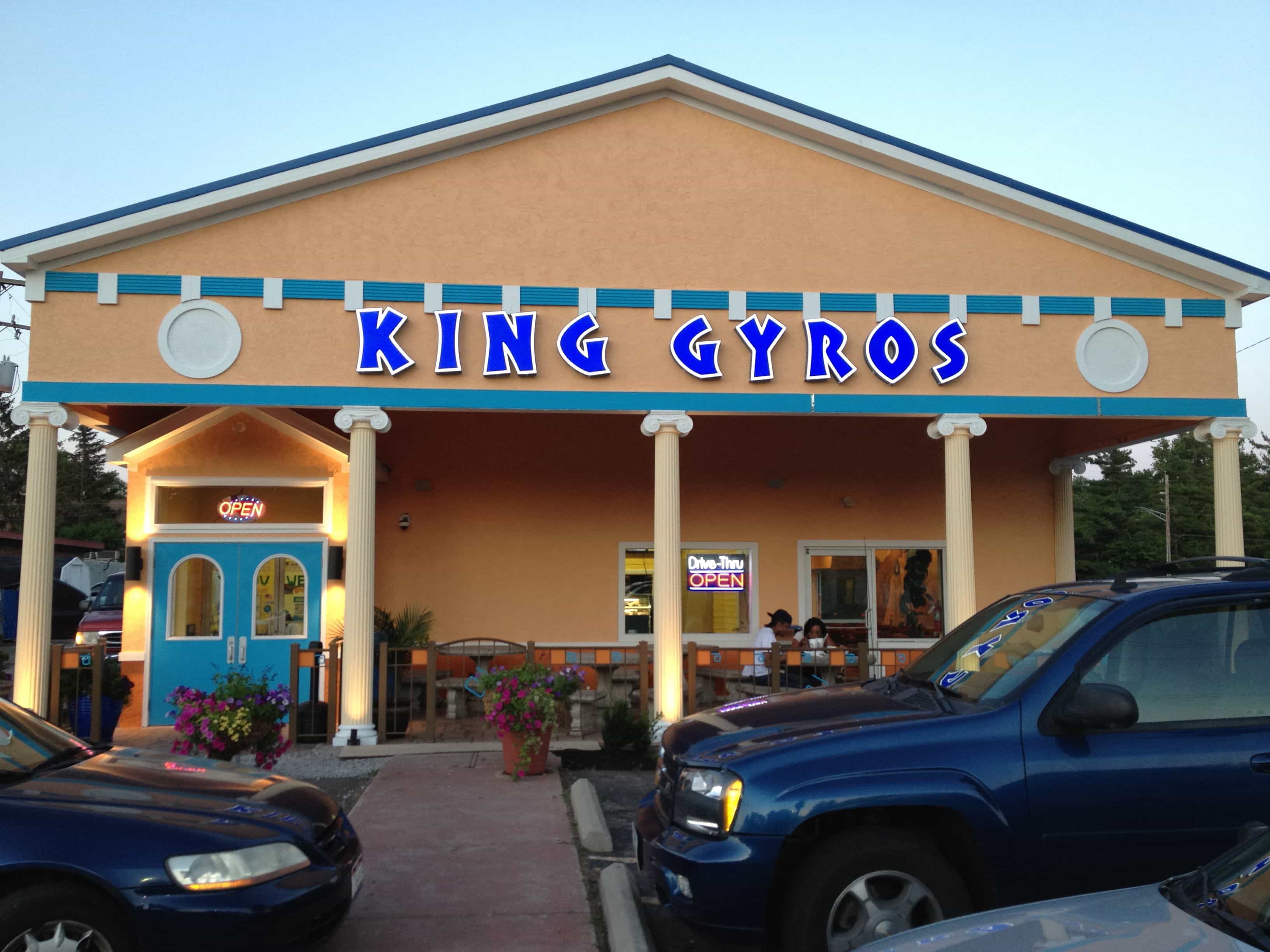 From the outside this place looks like your typical little Greek gyro place. Trust me, there’s nothing typical about this place. Just walk in.

You’ll be greeted by a friendly face at the counter, a series of foil wrapped blobs, the smell of lamb turning on a rotisserie, and cases and cases filled with Greek pastries. It’s heavenly.

The menu is fairly extensive, but let’s face it. You’re here for the gyros. And I say that as someone who’s tried the pastitsio, the chicken gyro, and the hummus plate. They’re good, but nothing compares to the classic Greek gyro.

If you’re going for the gyro, you’ll be faced with another difficult decision. Remember those foil wrapped blobs? They’re the sizes of the gyros. 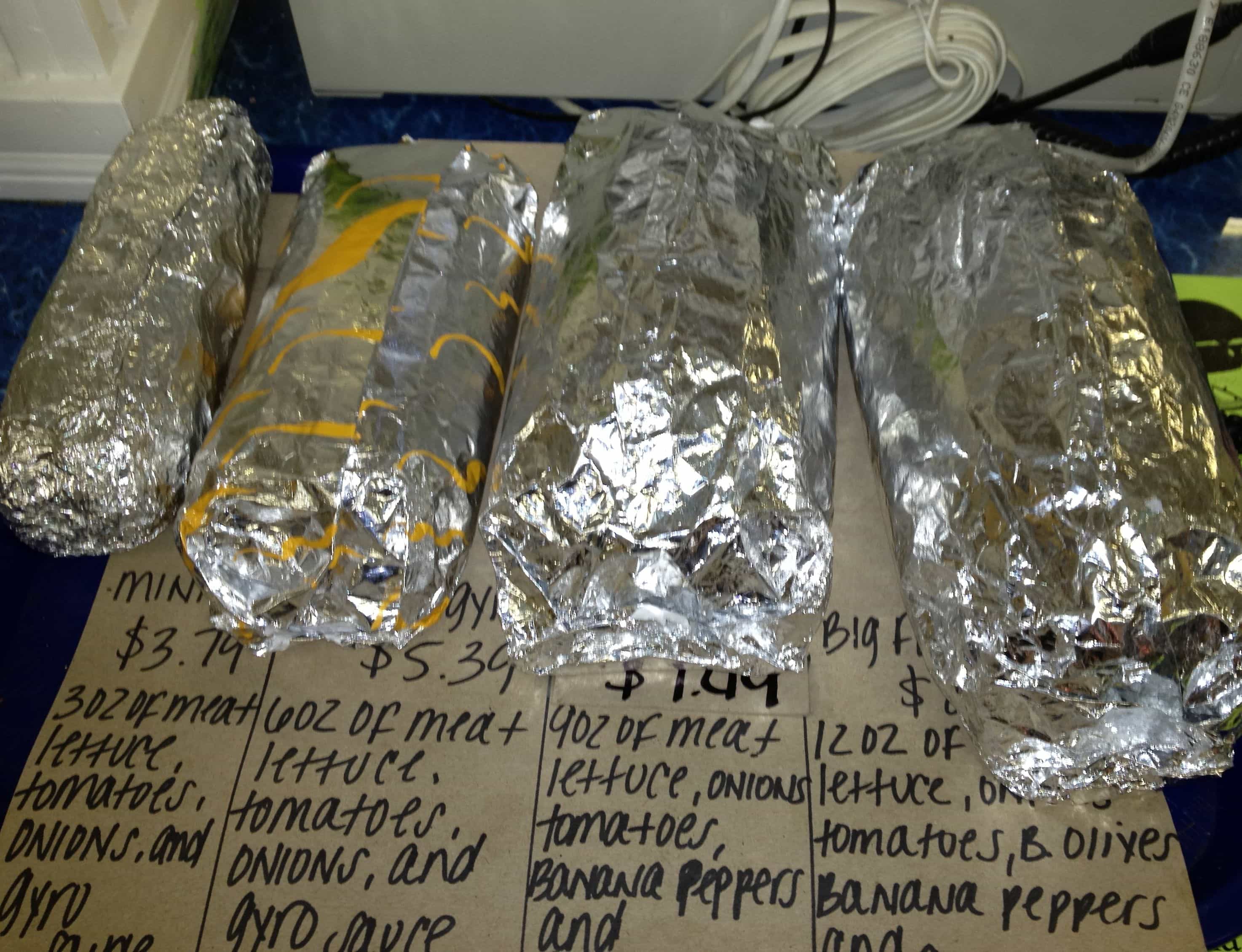 As you can see, there’s a reason why they’re called KING- gyros. The mini size, which is 3 oz. of meat in a pita, is usually more than enough to fill me up, but I’ll be honest I’ve put down a regular size more than once. If you’re really daring, and hungry, and enjoy food challenges, try the Big Fat Gyro. It’s 12 OZ (!) of meat in a big fat gyro. And let’s face it, large quantities of delicious lamb can never be a bad thing.

Once you’ve chosen the size you’ll need to choose what goes in it. Typically, they come with lettuce, tomato, onions, banana peppers, and their specialty gyro sauce.

This sauce is amazing. So amazing that they actually sell it by the jar. I have never purchased said jar, because if I did I know I would eat it by the spoonful. I have, however, been known to sneak a few extra to go containers of the sauce out of the store. Really. It’s that good. 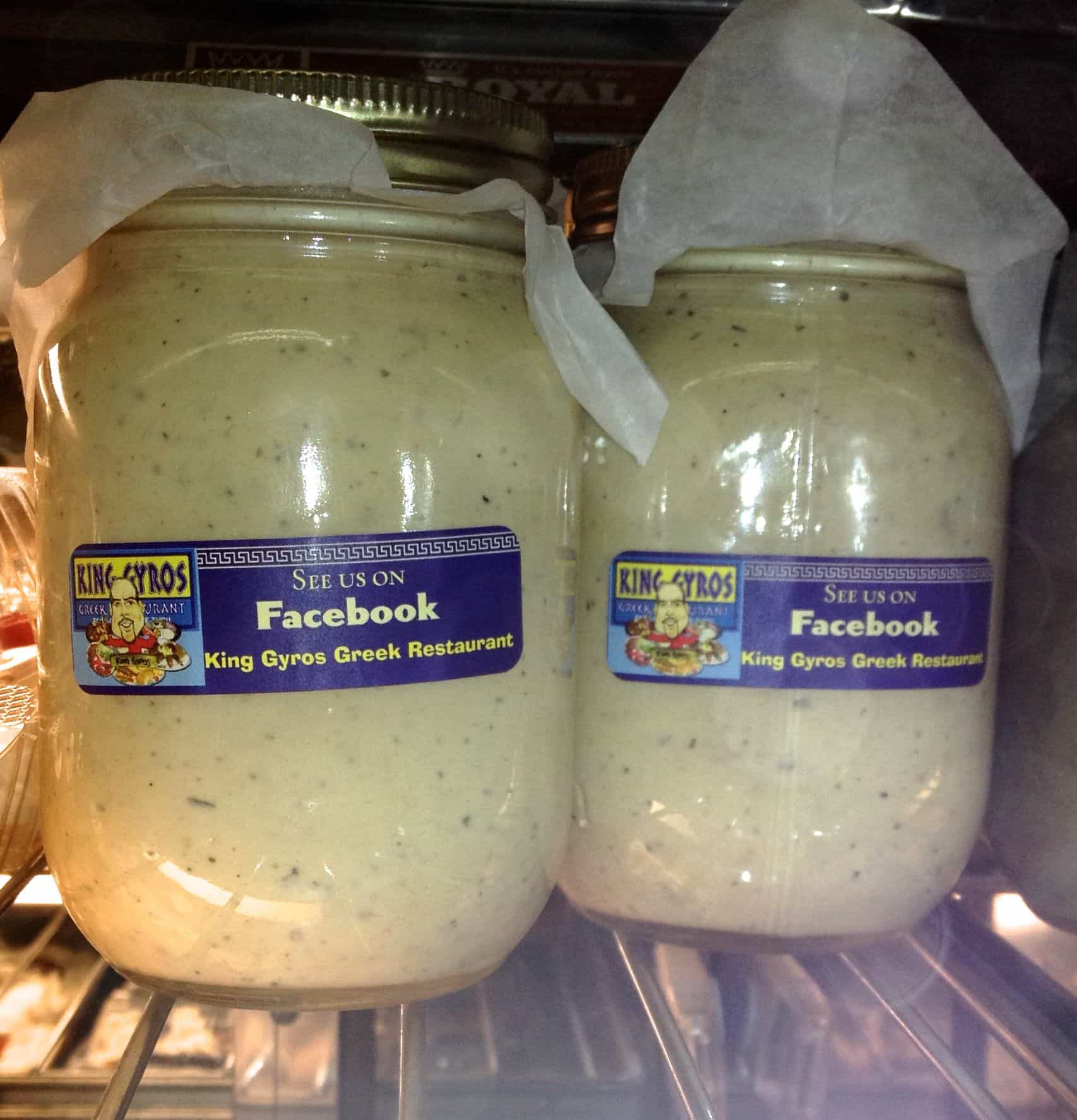 The basic toppings on the gyro are just about perfect, but for an extra kick of flavor, I highly recommend adding feta cheese.

After you order you can sit down and wait (if you’re carrying out) or enjoy their newly renovated space with friendly tables, flowers in vases, and a lovely seaside mural. It’s not exactly fancy, but the Mr. and I have enjoyed more than a few date nights beside that painted sea. 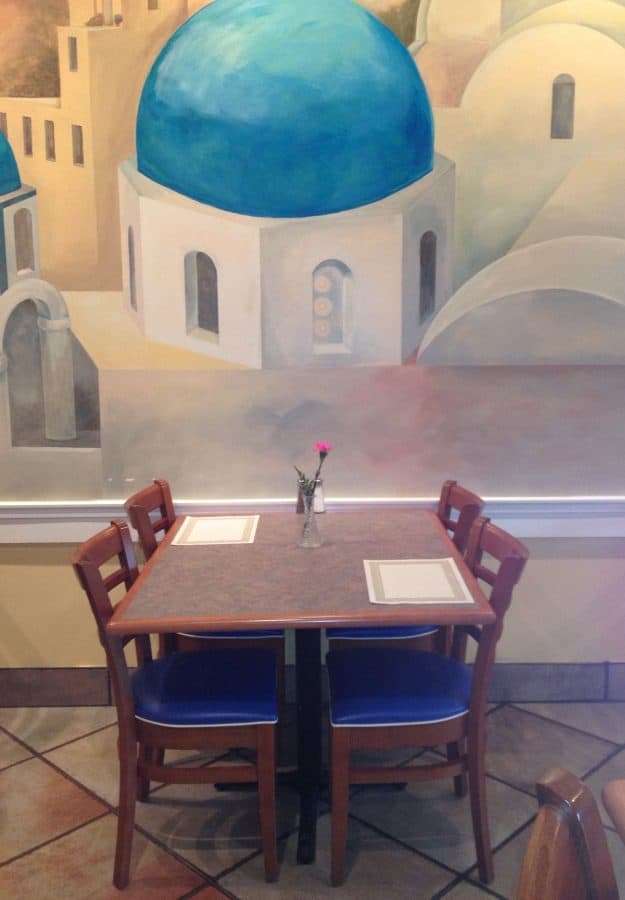 The presentation of the food isn’t terribly impressive, but one whiff of that foil lined package is all you’ll need to be convinced this was worth it. Truly, hands down, absolutely the best gyro I’ve ever had. (And believe me, I’ve been trying to catch up after my gyro-less childhood, so I’ve had my fair share of gyros).

The meat is tender and perfectly seasoned. The pita is chewy and warm, the toppings fresh, and the sauce…welll…you already know how I feel about the sauce. 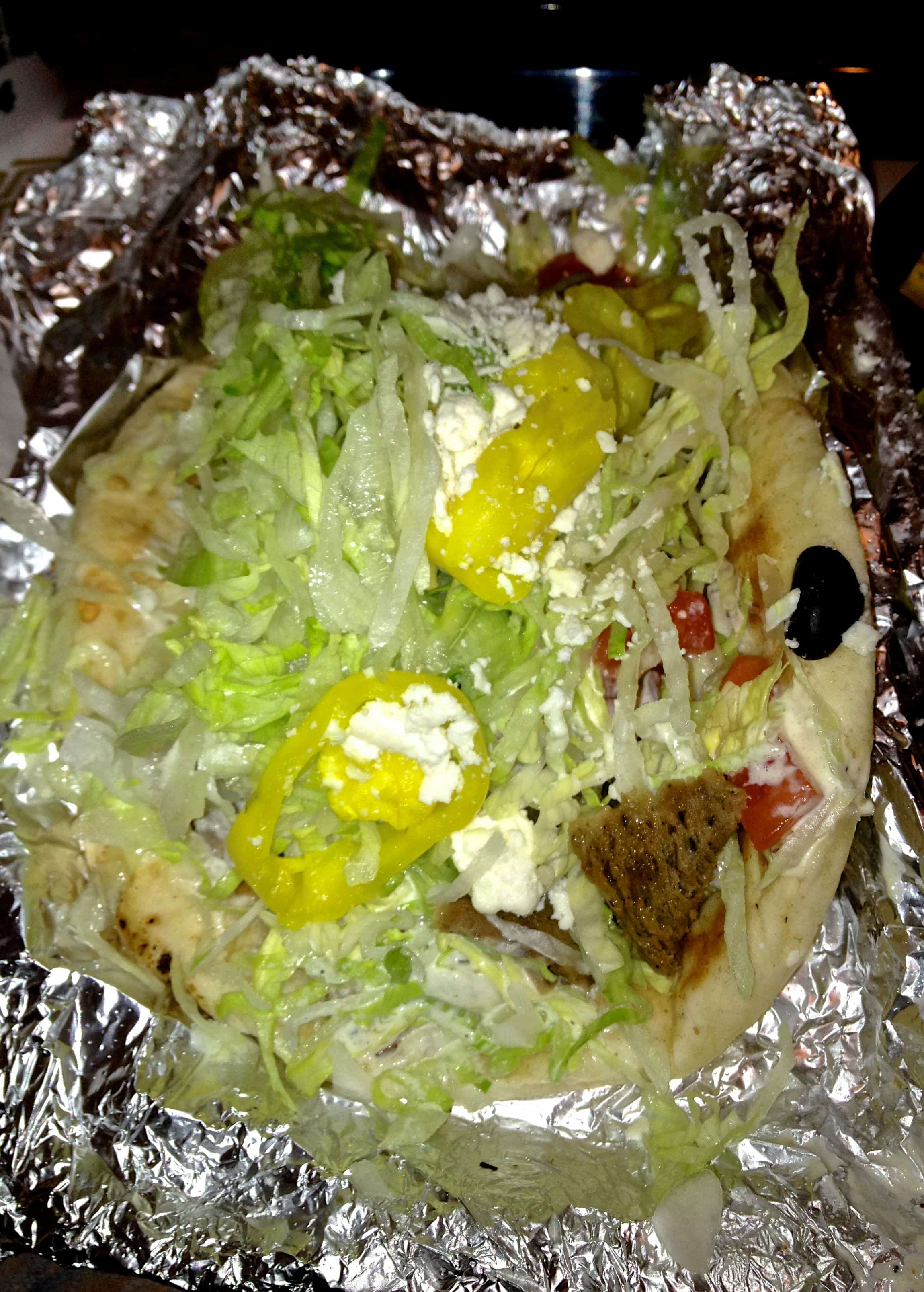 King Gyros offers several sides with their gyros. The fries are similar to what you’d get at the fair sans the vinegar. I’m a big fan of the lemon chicken soup myself. They also have great sweet tea, but I’m really there for the gyros!

Oh, and dessert of course! Save some room, because there’s enough baklava varieties in those glass displays to make a second meal. 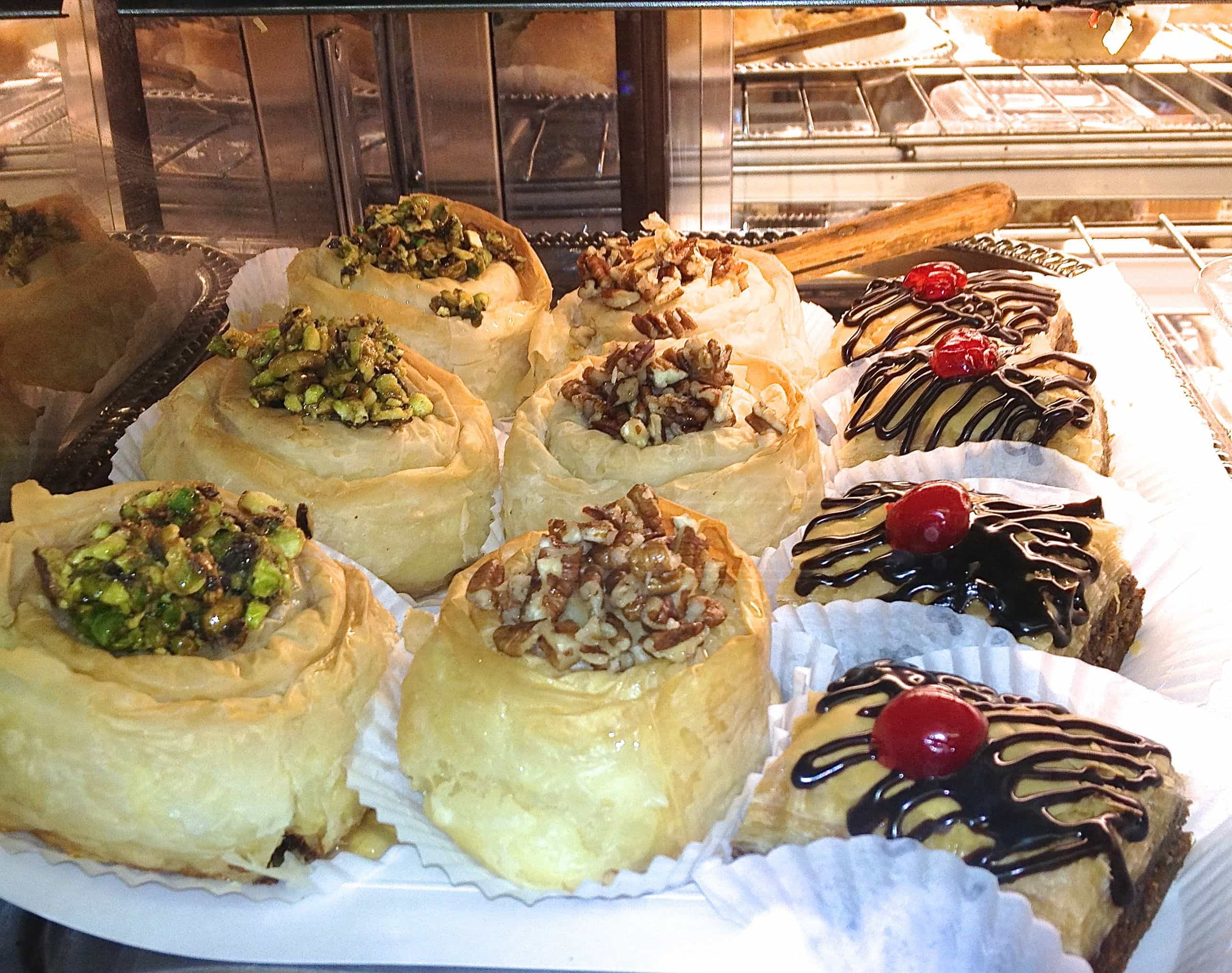 The pricing is very reasonable. We usually walk out for between $15 and $20 for both of us, depending on whether we get drinks and dessert. It’s a family owned and operated business and we’ve always experienced great service and friendly folks when we’ve been. All around a wonderful atmosphere, delicious food, and a great value.

The verdict? Get your butt over to Whitehall and try these gyros as soon as humanly possible. I promise you won’t be sorry.