This Mushroom and Leek Quiche with melty gruyere cheese is a lovely recipe for Easter or any spring brunch! 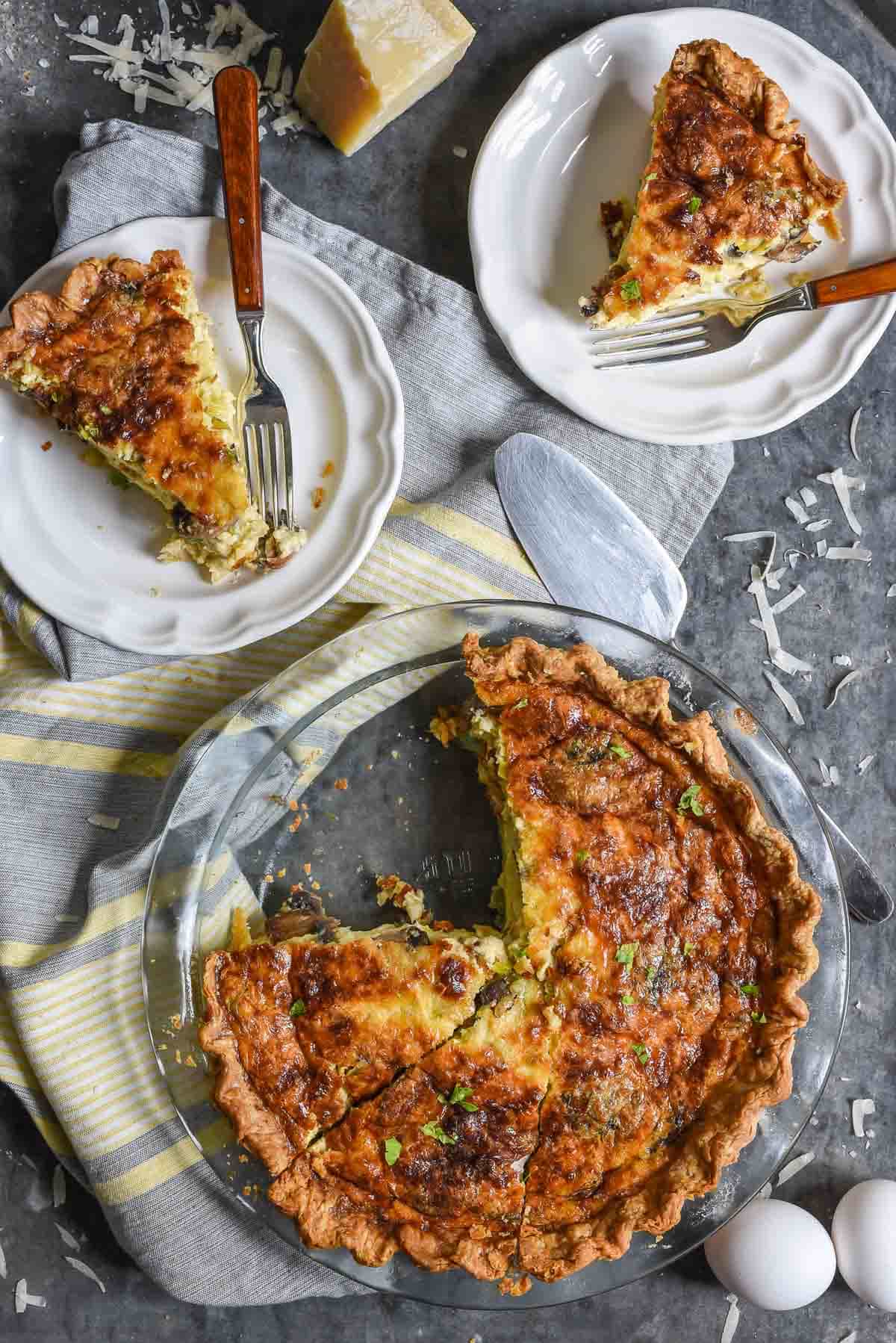 Way back in November we had our first snow storm of the season. It a was a little early for a first snow storm in Ohio, but it was lovely. Thick, fat flurries dotted the sky and stacked up outside our house. Being the first time mom that I am, I decided we must immediately go and purchase little P a snow suit. I mean, just think of all the wintertime fun we had ahead of us. Likely months of snowballs and sledding, snow men and snow ice cream. My momma heart was exploding imagining the tiniest and cutest snow angel ever made.

So we went out and got it all–the boots, the snow pants, the hats, the gloves. We were ready.

Then it proceeded to not snow for another three months.

I can’t say we didn’t enjoy our warm winter. We had plenty of mid-January park visits that were positively glorious, but every time I saw the little snowsuit hanging in the back of P’s closet, I got a little heartsick.

When March rolled around, I decided it was time. I dragged the snowsuit out of the closet, tags still dangling from the side, and took it back to the store. The next week, it snowed. Of course. The last two weeks have been cold, dreary, and speckled with a mix of snow, sleet, and rain. Typical February in Ohio. Only it’s not February, IT’S MID MARCH. You can’t be 60 degrees in January and 20 in March. It’s a cruel joke, Ohio, and I don’t find it amusing. 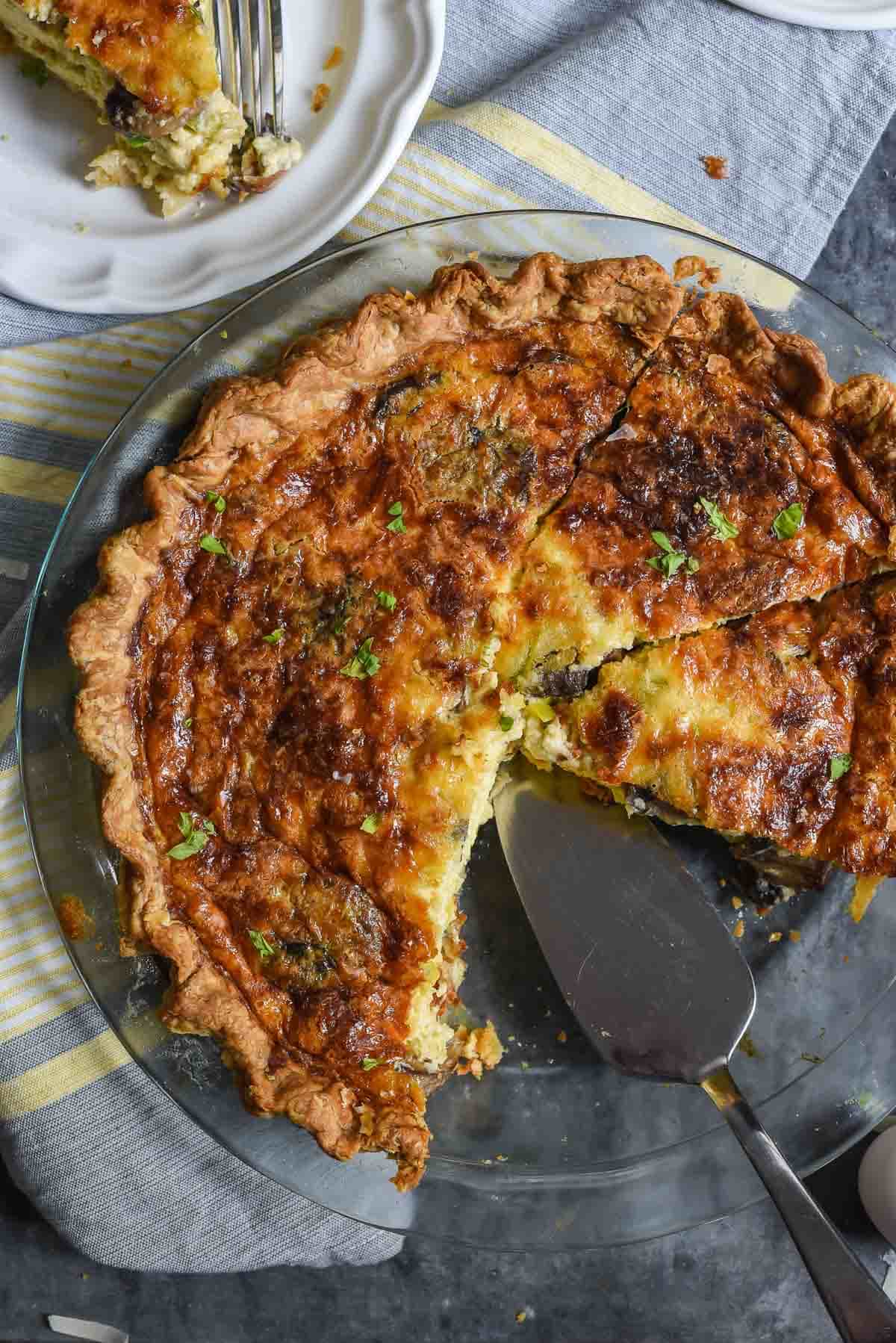 Feeling helpless, I decided to protest the dreariness by making quiche. The cheeriness of a quiche cannot be thwarted by a relentlessly gray week. Its golden crust and fluffy, cheesy egg center warms the home, bringing to mind the lightness of spring and the glory of an Easter morning brunch.

This Mushroom and Leek Quiche is particularly adept at turning around a sour mood. Pale, delicate leeks sauteed in butter, earthy mushrooms, and gobs of shredded Gruyere cheese make a quiche that is hearty and filling enough to stand up to the most dismal of days. I am loving this combination for an Easter gathering, but it’s also an easy and delicious way to get dinner on the table any night of the week.

A few notes about this recipe. The filling ingredients are designed for a deep dish pie crust. Nothing wimpy about this quiche! It is thick, hearty, and luxurious. If you’re using a regular pie plate, you’ll likely want to halve the ingredients or just make two and freeze one.

Usually, I make my own pie crust using a simple Buttermilk Pie Crust recipe or my 2nd favorite is the “all butter recipe” in my Ultimate Homemade Pie Crust Recipe post. However, there are certainly occasions (like when the kids are sick or the hubby’s working long hours or pretty much any Monday), where I would absolutely use a store bought crust. There’s no shame in my game! Quiche is fantastic, whatever wrapping it comes in.

Finally, the recipe calls for 1/4 cup of flour whisked into the egg and milk mixture. I picked up this tip from Saveur, and I do think it gives the custard an extra silkiness. However, if you’re looking for a gluten free option, feel free to leave the flour out. It will still work just fine. 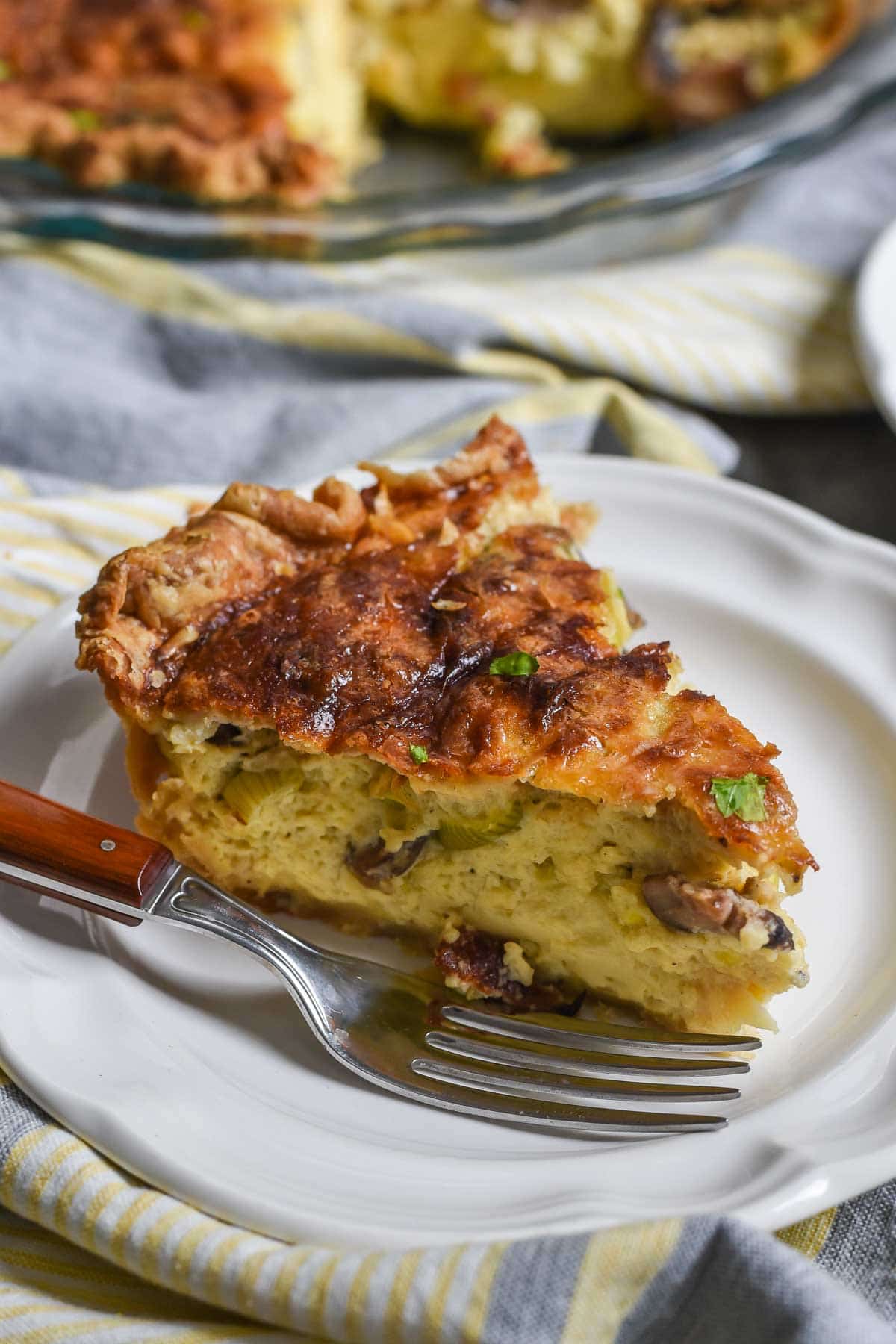 I hope wherever you are, it’s warm and sunny, but if it’s not, I hope there’s at least quiche. If you’re looking for more mood-lifting springtime recipes, you might want to check out my Lemon Blueberry Crumb Bread, Pineapple Coconut Cake, or Lemon Raspberry Poppyseed Muffins.