Move over apples! There’s a new fruit in town, and it’s taking the fall baking scene by storm. This Pear Bundt Cake with Vanilla Brown Butter Glaze was declared the best cake I’ve ever made! 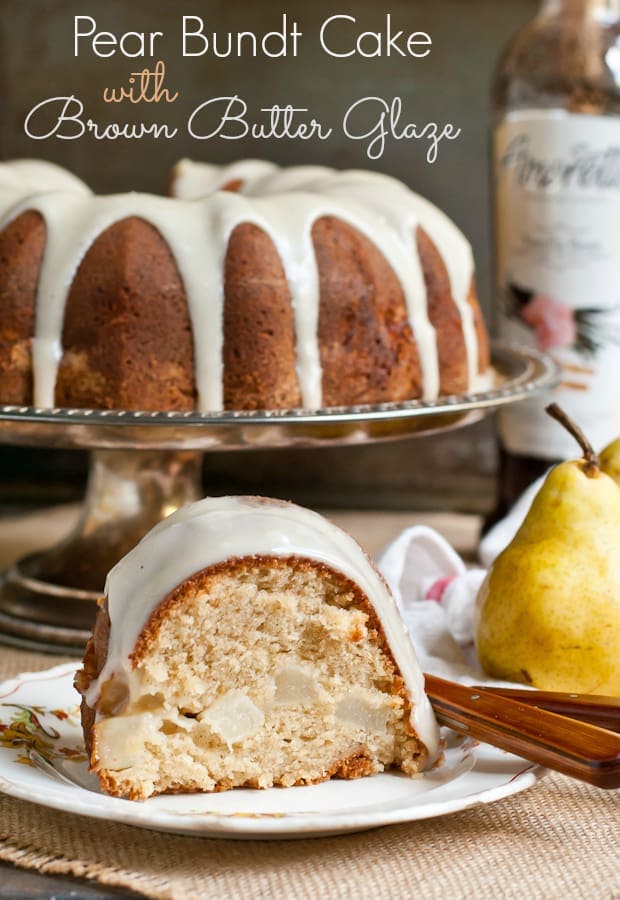 A long, long time ago, when a whopping eight people read my blog, I made a Vanilla Peach Bundt Cake. It was a huge hit, and it remains a summer favorite to this day. Unfortunately, peach season in Ohio lasts approximately 2.5 days so I don’t get to enjoy the cake nearly as much as I’d like.

I recently had a craving for my favorite peach bundt, but since peaches don’t exactly scream “October!,” I decided to create something with a more fall-appropriate flavor profile. The obvious choice was apples or pumpkin, but this time I found myself gravitating towards the lesser known of the fall fruit trifecta- pears.

Pears are the Cinderellas of fall fruit. The humble pear sits quietly in the background while apples and pumpkins fight over who gets the most Instagram hashtags named after them.

Then one day the pear gets all dressed up with some brown butter, cinnamon, and vanilla bean syrup, waltzes out of the oven, and steals the show. 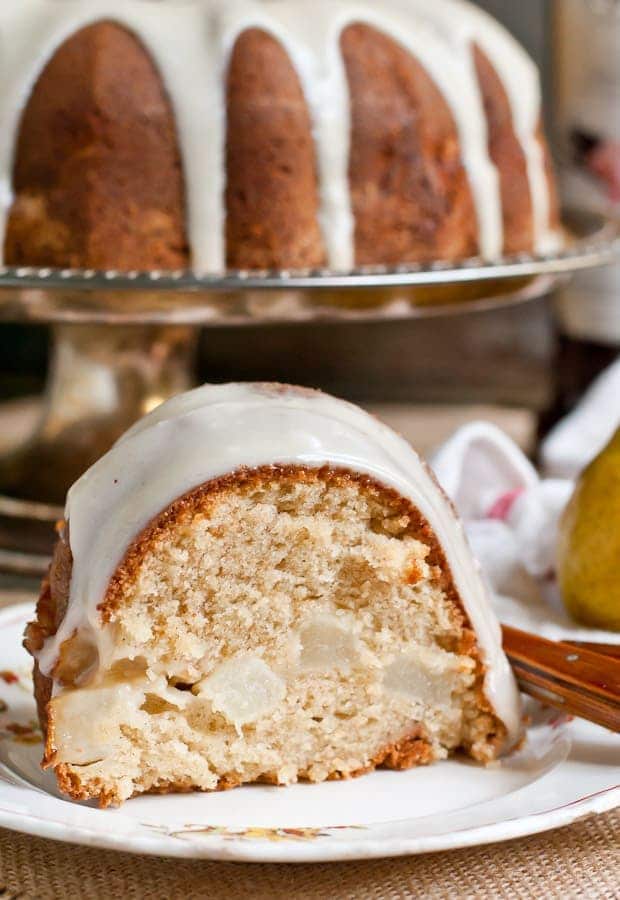 This Pear Bundt Cake with Vanilla Brown Butter Glaze is making all the apples and pumpkins jealous this year. It is an absolute stunner.

This golden, buttery cake is spiced with warm cinnamon, nutmeg, and ginger and studded with fresh pear. But the real magic comes from one very special ingredient: Amoretti’s Madagascar Bourbon Vanilla Bean Syrup.

You may have seen this syrup gracing the counters of your favorite coffee shop, but it’s also a great ingredient to have around for home baking. This syrup is the real deal. All it takes is one look at the bottle to see it is loaded, and I do mean l-o-a-d-e-d with real flecks of vanilla bean.

Just a pump or two is all it takes to add serious vanilla flavor to your coffee, baked goods, or even oatmeal. It’s the special something that lends this cake it’s rich, warm vanilla flavor. 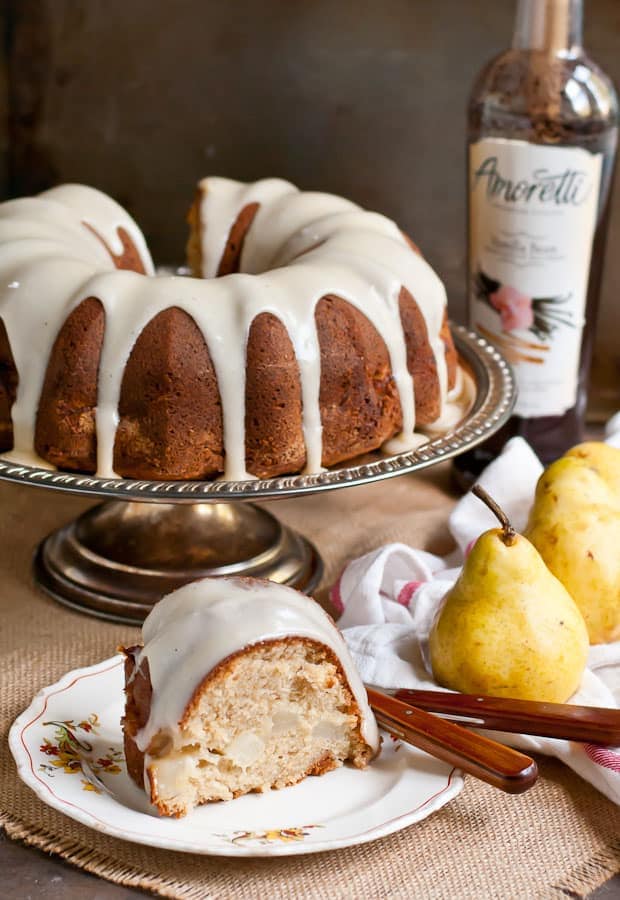 The syrup is so good I couldn’t resist adding a couple pumps to the glaze as well. Guys, I can hardly talk about this glaze without getting a little teary.

This is the first time I’ve used brown butter in a recipe, and now I feel like I owe you all an apology for holding out for so long. The toastiness, the richness, the nuttiness! Between the brown butter and the vanilla bean syrup, this glaze is outta control. The Mr. and I abandoned all sense of propriety and scraped it off the bottom of the pan with our fingers.

I know apples and pumpkin are vying for your attention this season, but if there’s one thing I really, really hope you’ll take the time to make, it’s this cake. The Mr. declared it the best cake I’ve ever made (and I’ve made a lot of cakes)! So save room on your Thanksgiving table for this one. You won’t be bringing home leftovers, I can almost bet on it!

Add eggs one at a time, beating after each addition. Beat in vanilla bourbon syrup.

Spoon half of mixture into bundt pan, spreading evenly. Layer with fresh diced pears. Spoon the remaining batter over top of the pears.

Bake for 50-60 minutes or until toothpick inserted in center of cake comes out clean. Cool for about 10 minutes. Set a wire rack over a baking sheet. Invert cake onto cooling rack.

Meanwhile, make the glaze. Place the butter in a small sauce pan over medium heat. Cook, stirring occasionally, until butter begins to foam and turns a toasty brown color. Pour the butter into a mixing bowl, leaving most of the brown sediment on the bottom of the pan behind. Whisk in the powdered sugar and 2 Tablespoons milk, vanilla syrup, and salt. Add additional milk if needed until the consistency is thick but pourable.

Once the cake has mostly cooled, pour the glaze on top, allowing it to drip down the sides. Serve at room temperature or (my favorite) warmed with milk or ice cream.