Am I the only one with serious issues pronouncing the word quinoa?

It can be just a bit frustrating when you’re cooking with something you can’t even pronounce.

Yeah, not a good way to convince your husband to try something new. 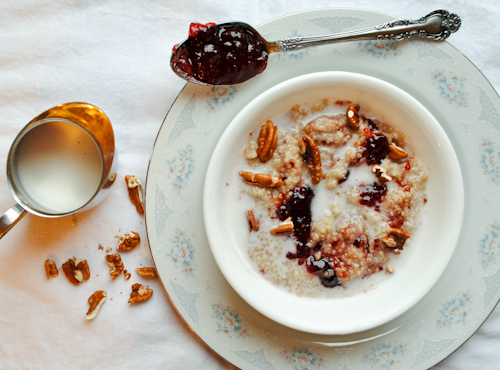 So after completely turning the Mr. off to the idea of grainy balls, I finally looked it up and learned (drum roll please) it’s pronounced KEEN-wah. Wouldn’t have been my first choice, but hey, at least now we know.

And it turns out KEEN-wah is actually a pretty fantastic grain. It’s hearty and filling and makes a delightful breakfast when swirled with coconut milk, strawberry jam, and cinnamon.

This feels like comfort food, but offers a lot more nutrition than your typical carb loaded breakfast fare. It’s creamy and rich without being overly heavy, gluten free, AND vegan! In other words, awesome.

Branch out from oatmeal and give KEEN-wah a try. But do yourself and everyone else a favor and call it by it’s real name. It’ll be a lot more appealing than the description. 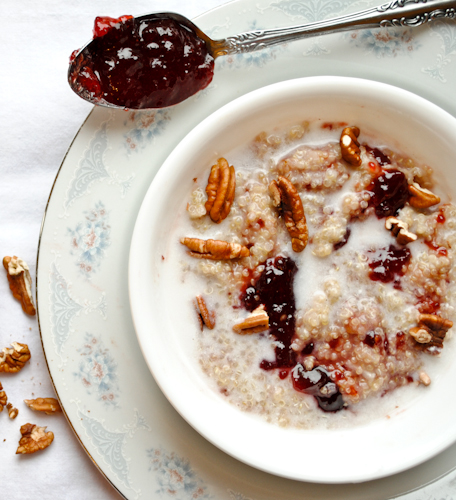 Directions:
Combine quinoa, coconut milk, vanilla, cinnamon and salt in a small saucepan and bring to a boil. Reduce heat to low, cover, and simmer 12-15 minutes or until most of the liquid is absorbed.

Divide quinoa between two bowls and add 1 1/2-2 Tablespoons of jam to each. Divide chopped nuts evenly between bowls. Serve warm with additional drizzles of coconut milk.