UPDATE: Check out my new post for an Easy Homemade Buttermilk Pie Crust. This new recipe is the best crust I’ve found, and can be made using your food processor!

I feel like making pie crust from scratch is a baker’s rite of passage. It’s the moment you go from “I can work my way around some flour and sugar” to “Butter and flour are my slaves and they obey my every command.”

It doesn’t seem like such a simple combination of ingredients could cause so many problems. I mean, how much damage could flour, fat, and salt really do? Isn’t it just like a sugar cookie? What’s the big deal, after all?

These are the questions we naively ask ourselves before plunging into the world of homemade pie crust. It’s not until we find ourselves crying into a pie plate filled with the mangled remains of what was once dough that we realize butter and flour have, in fact, completely dominated us.

Well friends, it’s time to turn the tables. It’s time for us to show the flour and fats who’s boss. 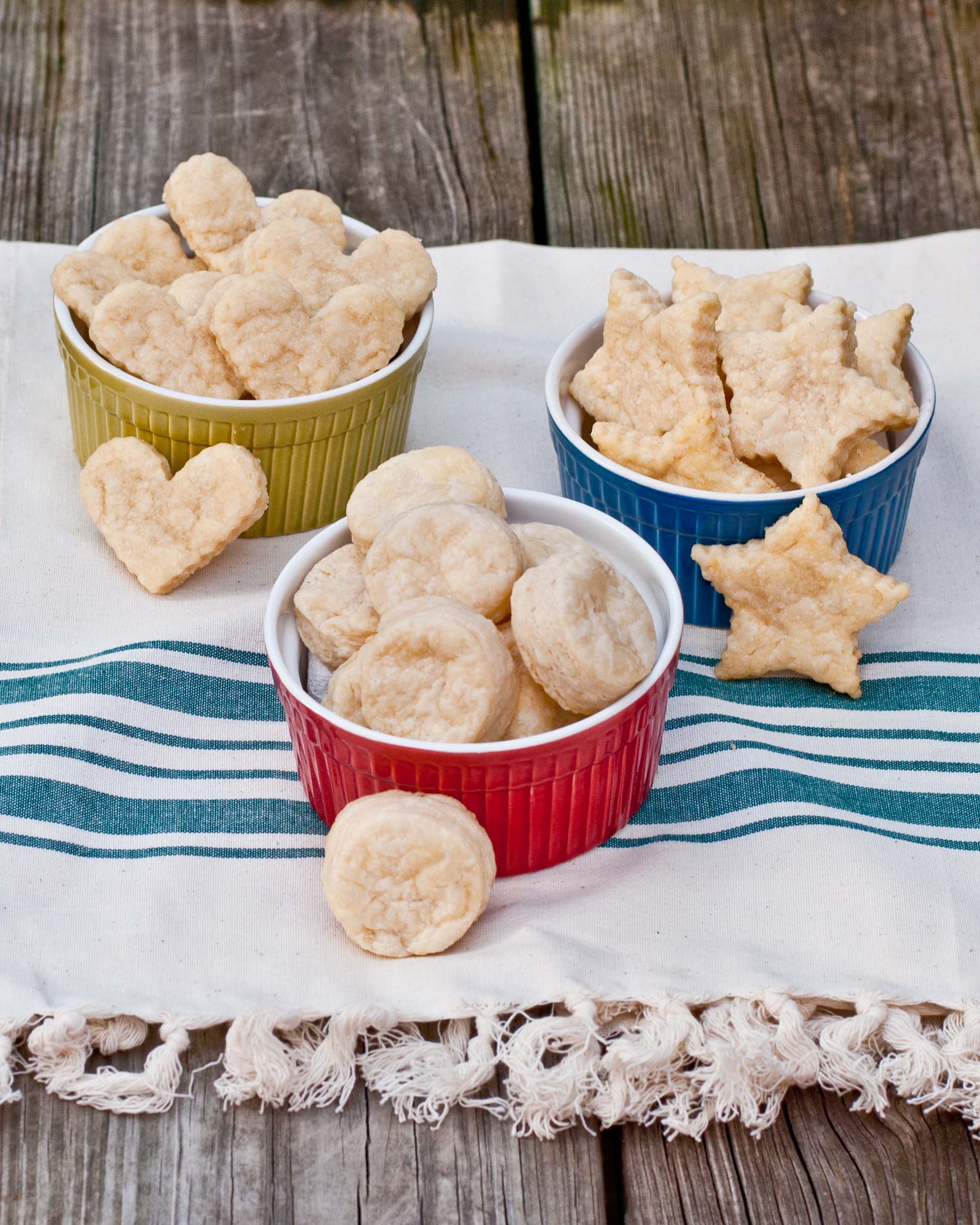 I was determined to find a pie crust I could count on, over and over again.

To do this, I took three different recipes, each using different fats, and put them to the test. They were each made by hand, without the aid of a food processor or mixer, rolled to the same thickness, cut into shapes, and baked. Each one was tasted, crumbled, analyzed, and, finally, made into a pie. Each crust worked well, and none of them caused weeping or gnashing of teeth. They each had their own unique advantages and disadvantages, which I think will help you discover your own perfect, fool proof pie crust recipe. Whether you’re going for the ultimate in simplicity, tenderness, or flakiness, I’ve got a pie crust recipe for you!

All Butter Pie Crust: (The Ultimate in Flavor) 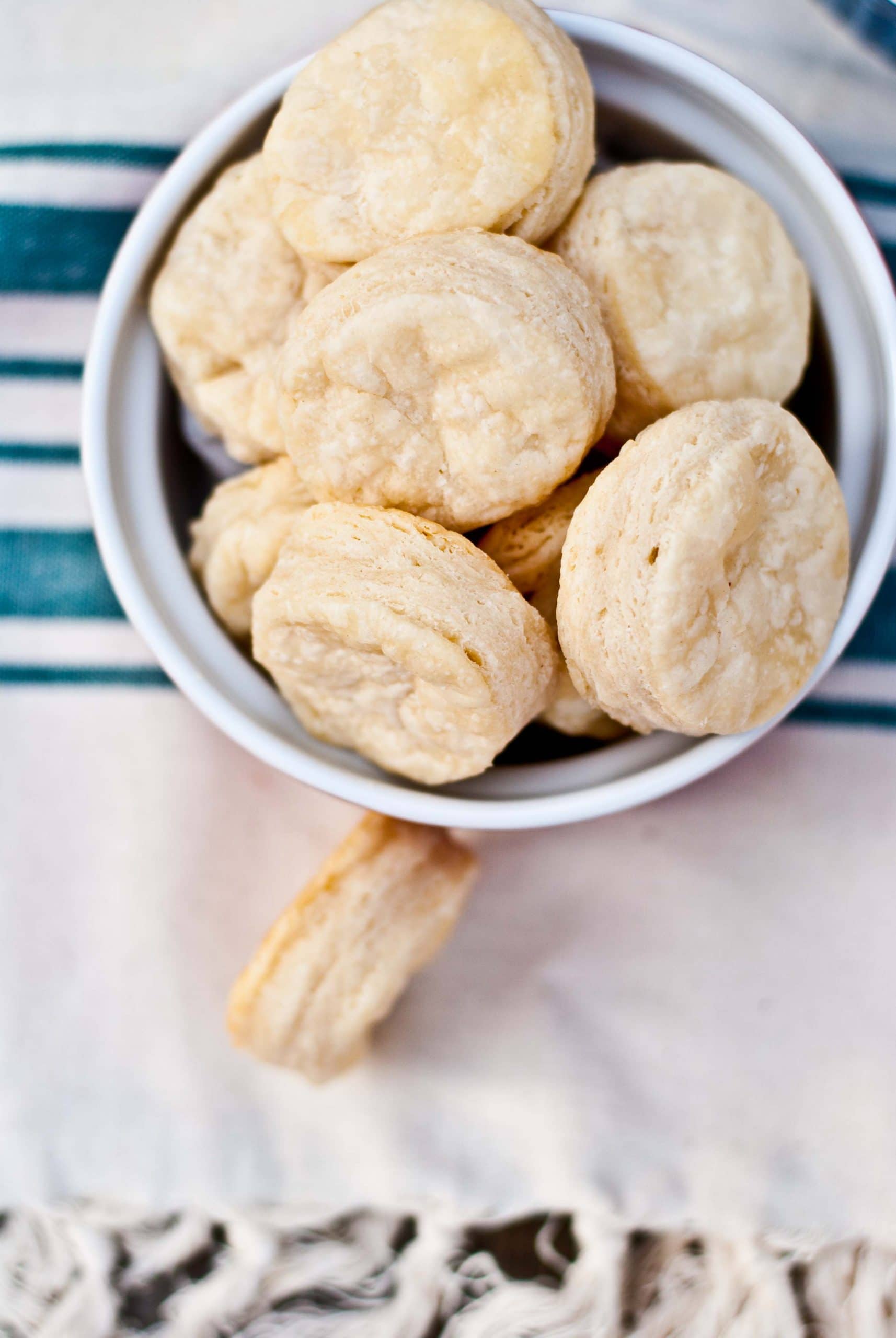 Pros: This crust puffed up into beautiful layers that melt in your mouth. After trying the other two crusts, this one tasted unbelievably rich. There really is no comparison flavor wise.

Cons: This crust is the most difficult of the three to work with. I’m going to be honest, cutting butter into flour with a pastry cutter is one of my least favorite jobs. It takes a good 4-5 minutes to work it together, and the dough doesn’t adhere quite as well as the other two do. (UPDATE: Making this pie crust in the food processor eliminates of this work and makes this crust much easier to assemble!) This crust needs to be refrigerated for at least an hour before trying to roll it out and can be finicky if it warms up too much while you’re rolling and crimping it. Thankfully, there’s an easy fix! Just pop it back in the fridge for a few minutes if it’s giving you any troubles. 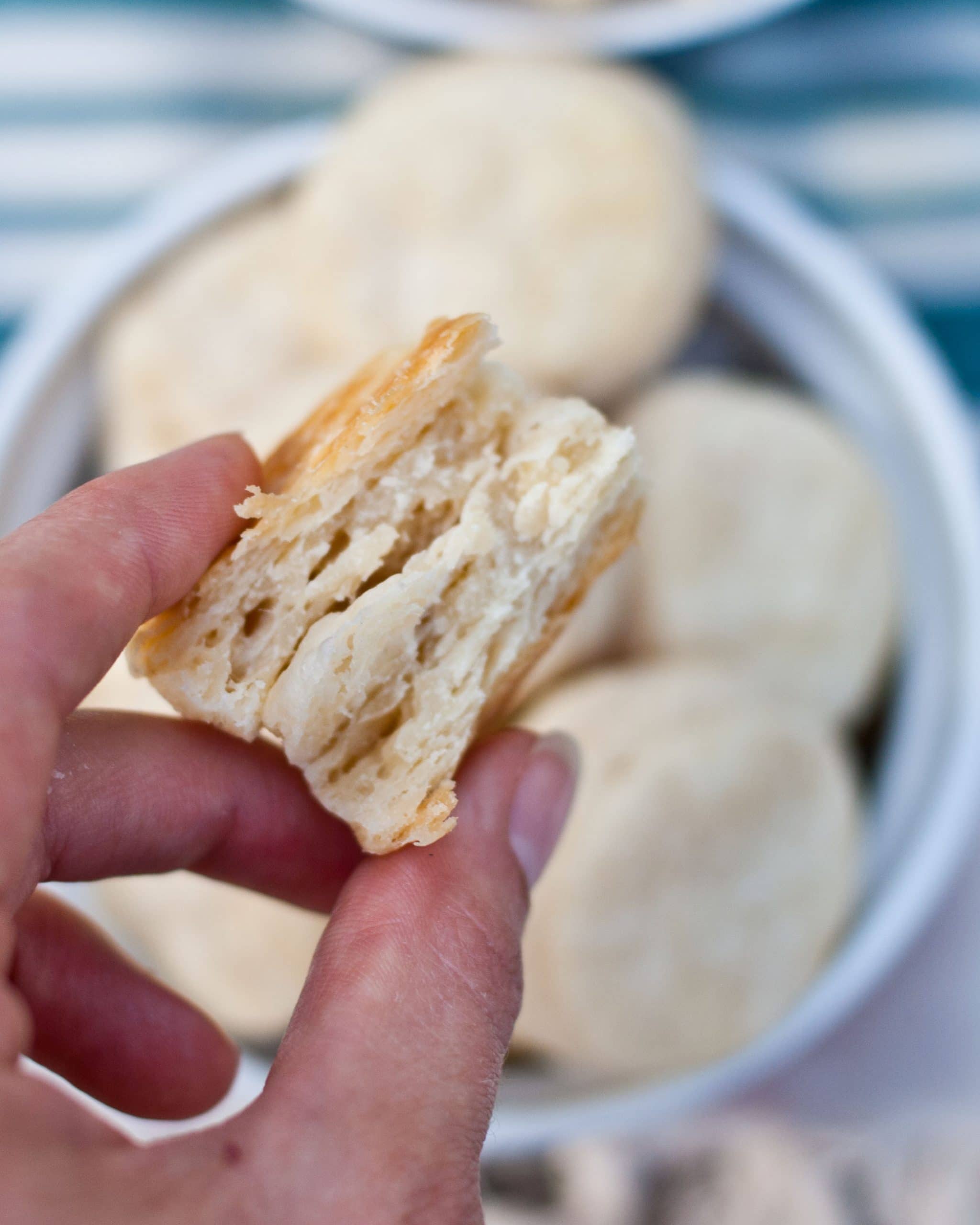 Verdict: On the whole, this recipe has the best flavor crust and a good flaky texture (though not as flaky as the shortening version). If I had a food processor that could make the cutting in of butter process less obnoxious, this would probably be my go-to recipe. As it is, if you have a little extra time and can make sure to refrigerate the crust for an hour or two before rolling, this is a good option.

All Shortening + Egg Pie Crust: The Ultimate in Flakiness 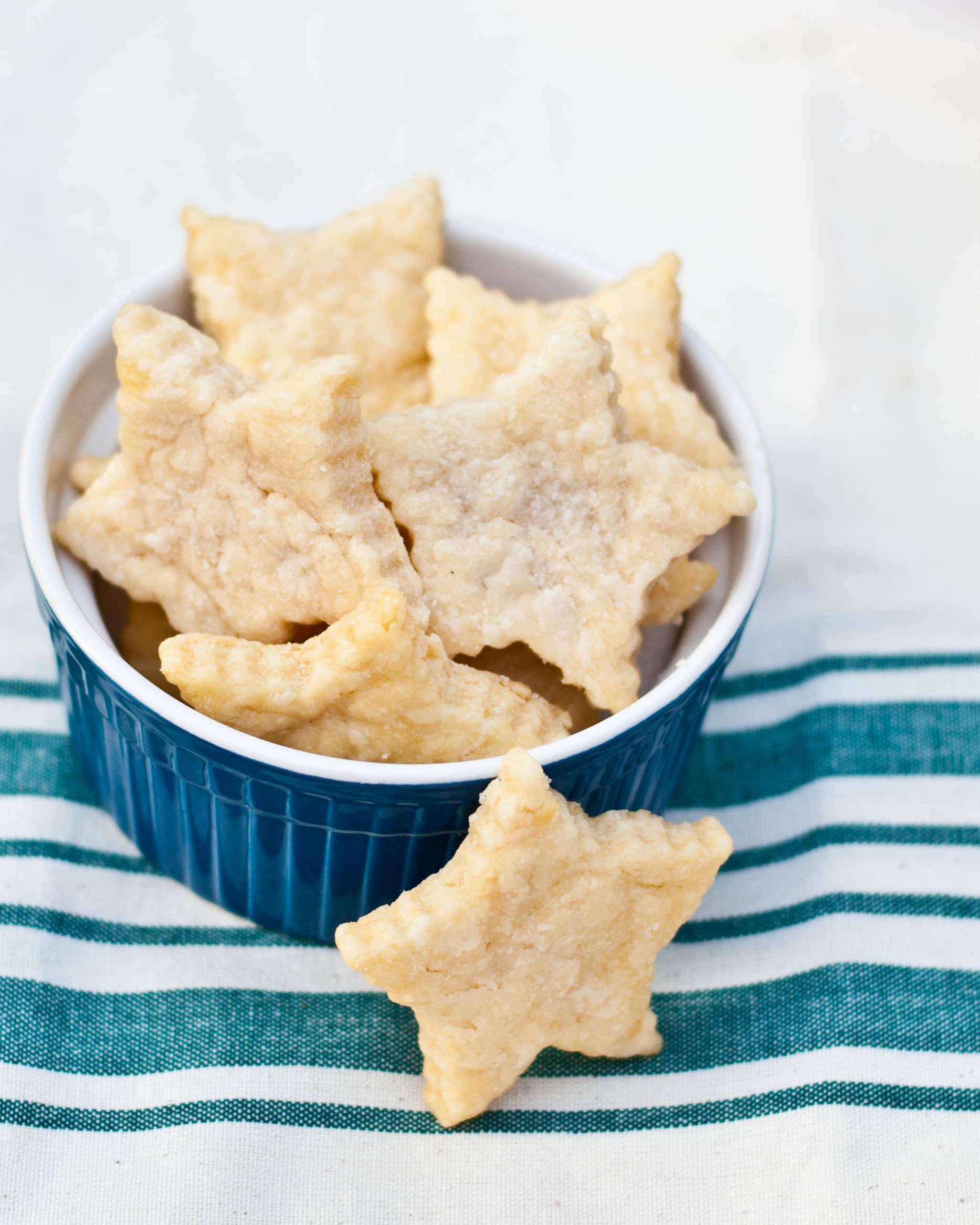 Pros: This crust is simple to put together, requires only 15 minutes in the freezer before rolling, and has an extra flaky texture. it’s much easier to cut shortening into flour than it is to cut butter into flour. This also makes three crusts, so with one batch you can have enough to make one double crust pie and toss the other crust in the freezer for another pie.

Cons: When eaten plain, the flavor of this crust definitely didn’t stand up to the all-butter version. Also, some folks may not be thrilled about using shortening in recipes. 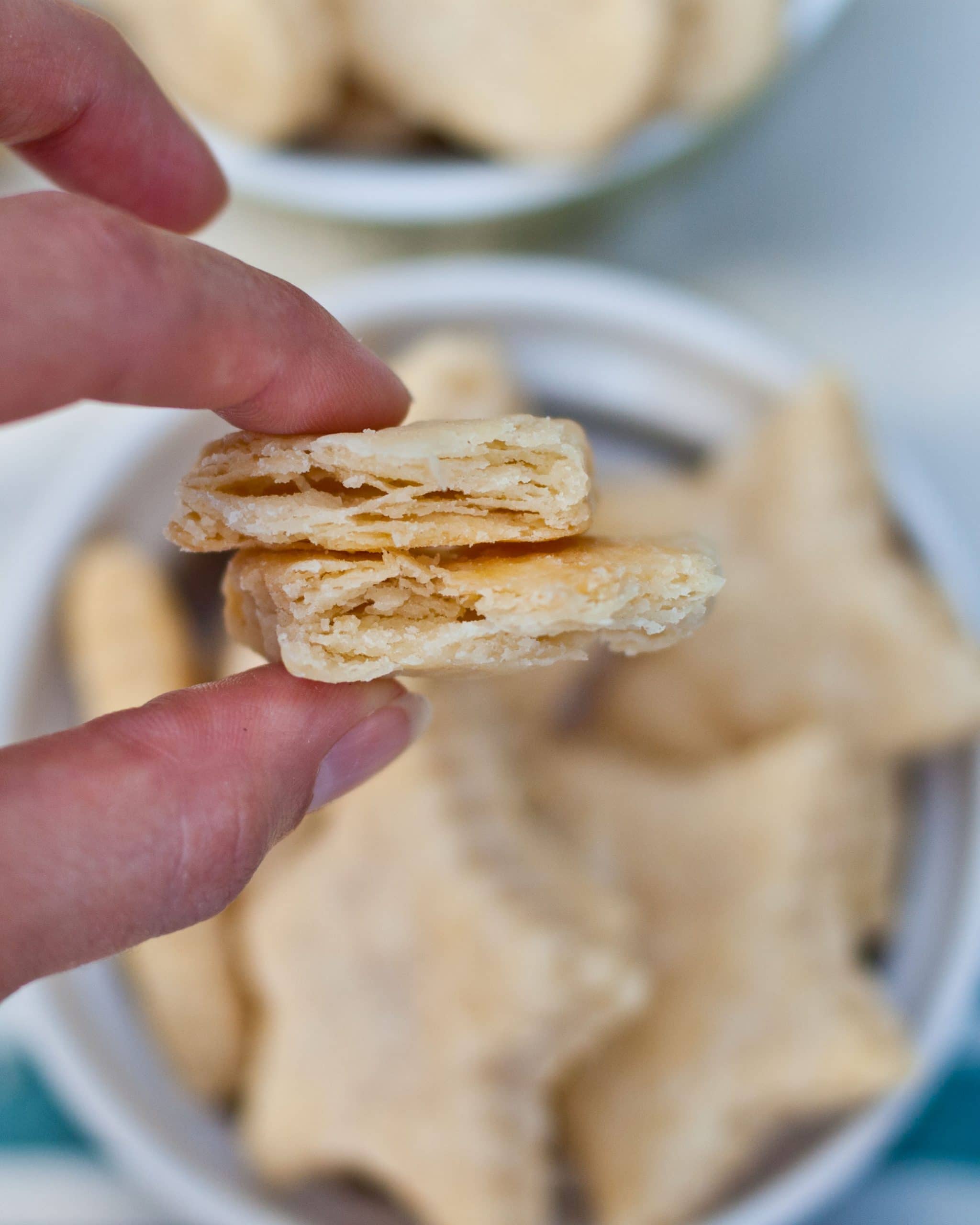 Verdict: I found that when baked with a pie filling, the flavor difference between this crust and the all butter crust was much less pronounced. What did stand out was this crust’s outstanding melt in your mouth flaky texture. This crust bakes up nice and golden and has a pleasant neutral flavor against the pie filling. This crust will likely be my most used…at least until I get a food processor.

All Vegetable Oil Pie Crust: The Ultimate in Tenderness and Ease 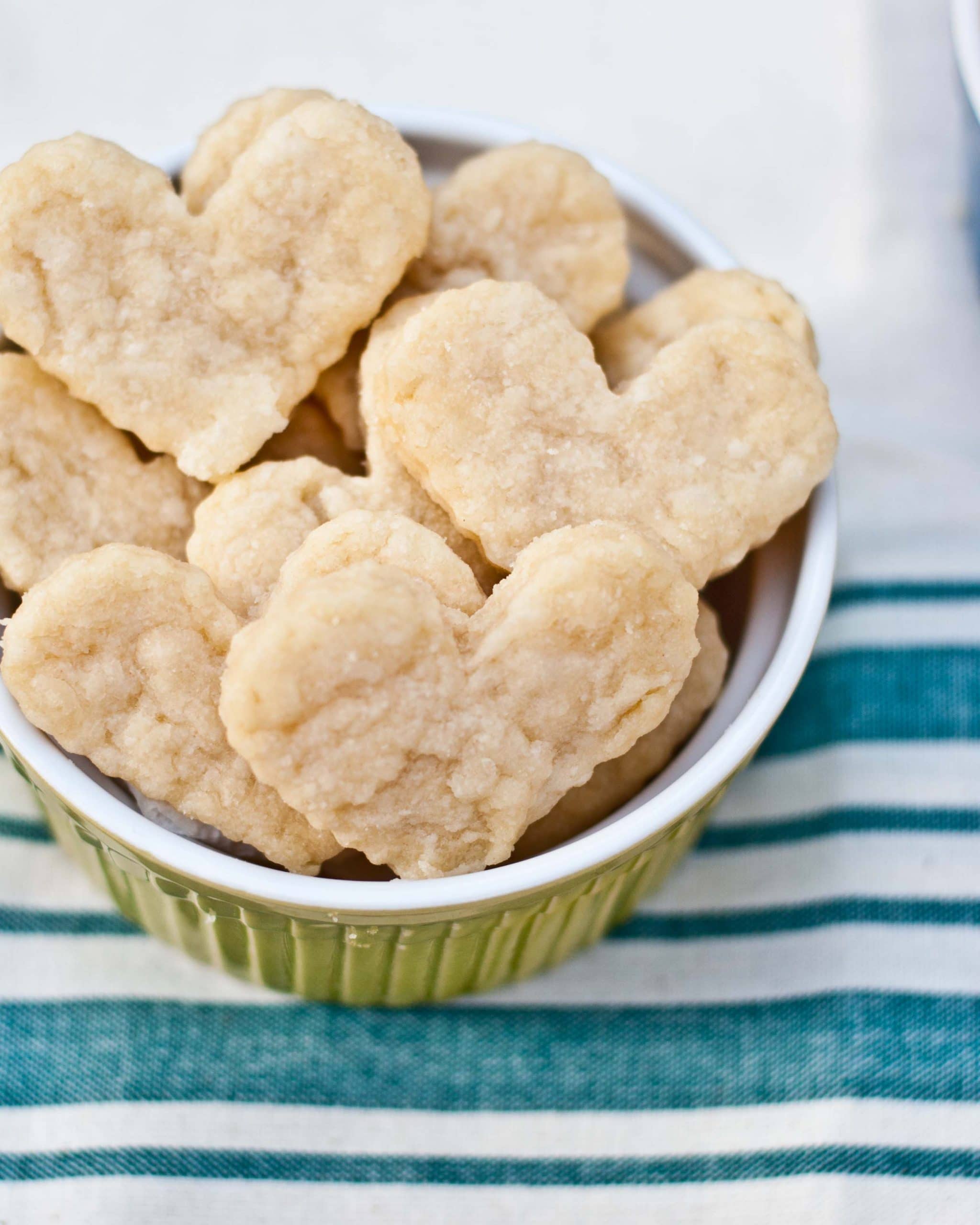 Pros: This recipe doesn’t require any cutting in of anything and is the easiest of the three to make. It also can be rolled out without refrigerating, though refrigerating can make rolling even easier. This recipe is my mom’s so it holds some nostalgia for me. It was also the first pie crust I ever made, and I managed to do it without tearing the very first time. So, yeah, it’s pretty no-fail.

Cons: This dough is a little more oily and the texture tends toward tender, rather than flaky. I personally prefer a flaky crust over a tender one, but if you like a more tender, crumbly crust, this is a great recipe to have on hand. 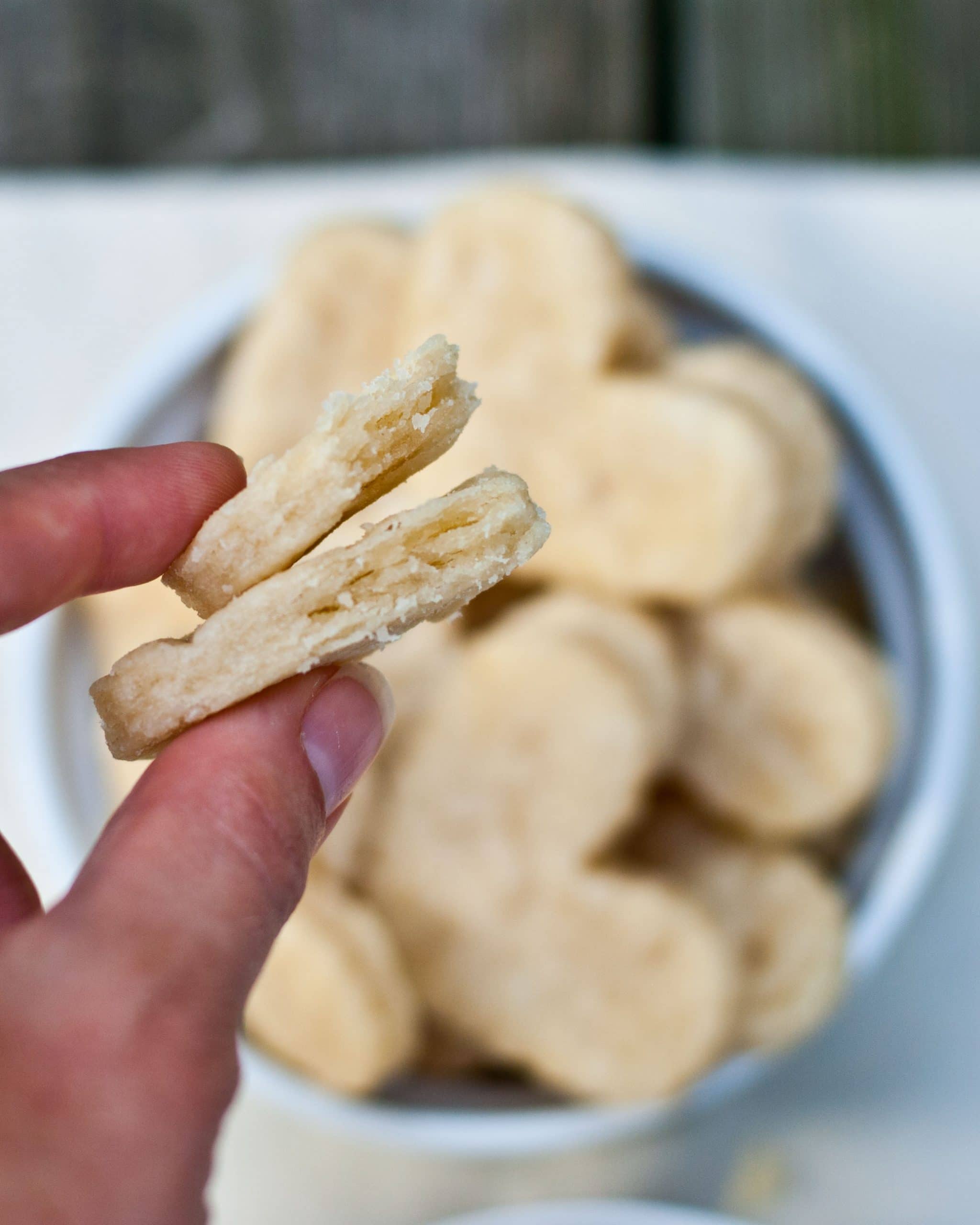 Verdict: While I love the simplicity of this crust, I didn’t think the texture or flavor was as good as the other two. Since the shortening recipe doesn’t require a lot more time, I plan to use that one instead.

Because I think all three of these crusts have merit and certain ones would be preferred in certain situations, I’ve included the recipe for all three below. Of course, you could also create a hybrid using equal parts shortening and butter. All of these crusts are neutral and can work with sweet or savory pies. However, if you like a sweeter crust for sweet pies, feel free to add an additional 2 Tablespoons of sugar to the recipe. I encourage you to experiment and determine your own perfect pie crust based on your preferences and tastes.

As you can imagine, along the path to perfect pie crust, I picked up a few helpful tips. Below are some things that will make the process easier, no matter which recipe you choose!

Weigh your dough– I know, I know, this just seems like another really obnoxious step. But here’s the thing. Each of these recipes makes at least a double crust. The shortening recipe makes a triple crust. Dough can be deceiving, and it can be difficult to divide the dough evenly by sheer guessing. If you weigh your dough you know you’re going to end up with enough to fill your pie plate every time. I’ve had way to many experiences where I’ve rolled a crust out only to discover that it’s a teensy bit too small for the plate. You don’t want to be left stretching dough to fit your pie plate, so if you have a kitchen scale, I recommend you use it. 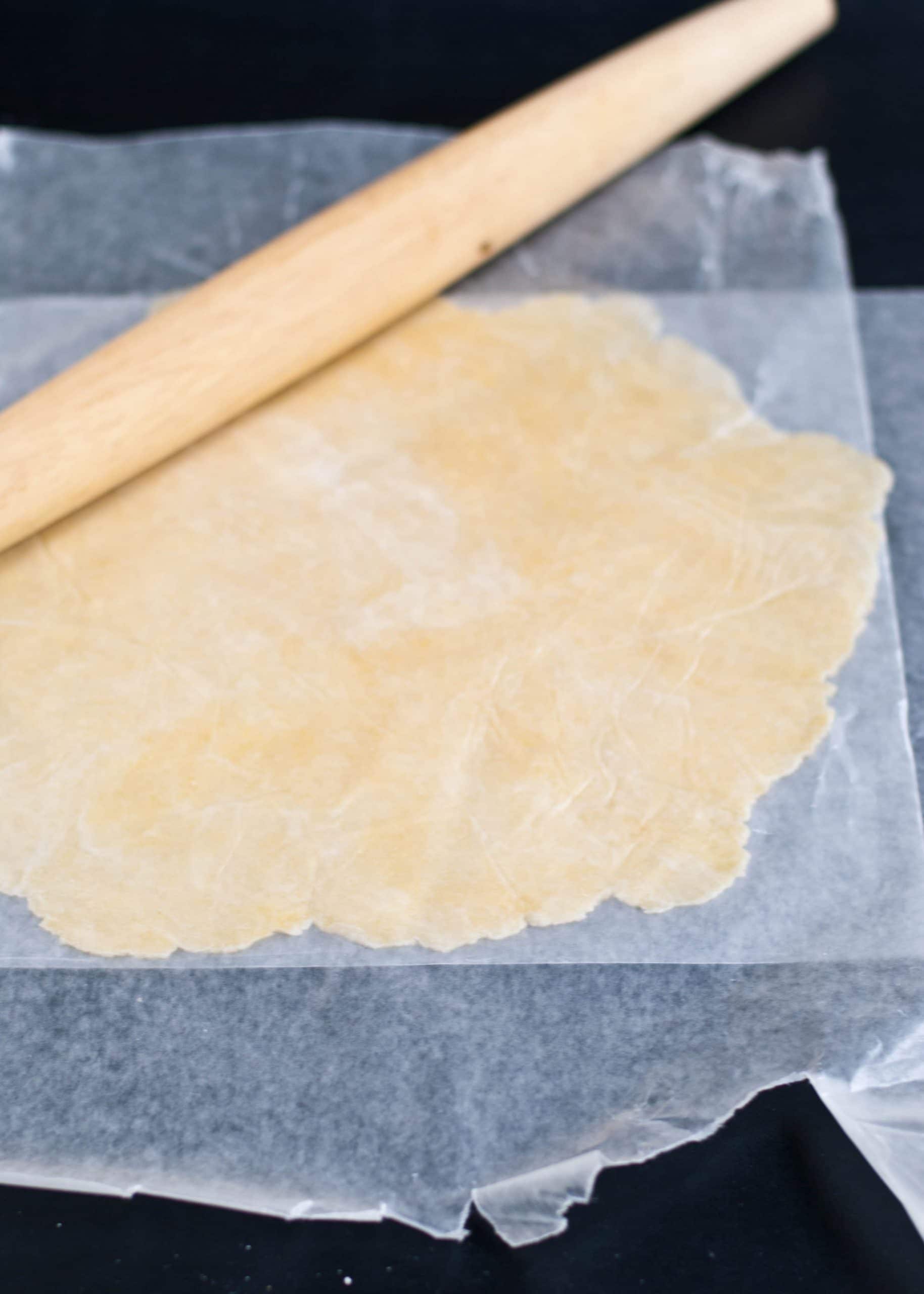 Roll the dough out between wax or parchment paper- For all of these recipes, I roll the dough out between two pieces of wax or parchment paper. This allows you to use way less flour when rolling out the dough and keeps your fat to flour ratio intact. I very lightly dust the parchment paper with flour before rolling out. Sometimes the butter crust may require a tad more flour, but still not a heavy coating. The great part about this method is that when the crust is rolled out you simply remove the top layer of paper, flip the dough into the pie plate, then carefully peel off the second layer of paper. No mess, no ripping, no tears, frustration, or cursing. Seriously, this is the only way to roll pie crust.

Store dough disks in the freezer in plastic bags– All of these crusts can be frozen and used later. If you’re only making a single crust pie, be sure that extra dough doesn’t go to waste! Simply shape it into a ball, flatten into a disk, and store in a quart sized freezer safe ziplock bag. When you’re ready, place the dough in the fridge to soften over night, or simply lay on the counter for 20-30 minutes (the butter crust will need more time to thaw). Roll it out like normal! Do make sure you roll it out while it’s still cold, or else the crust can become too warm and will be difficult to work with. 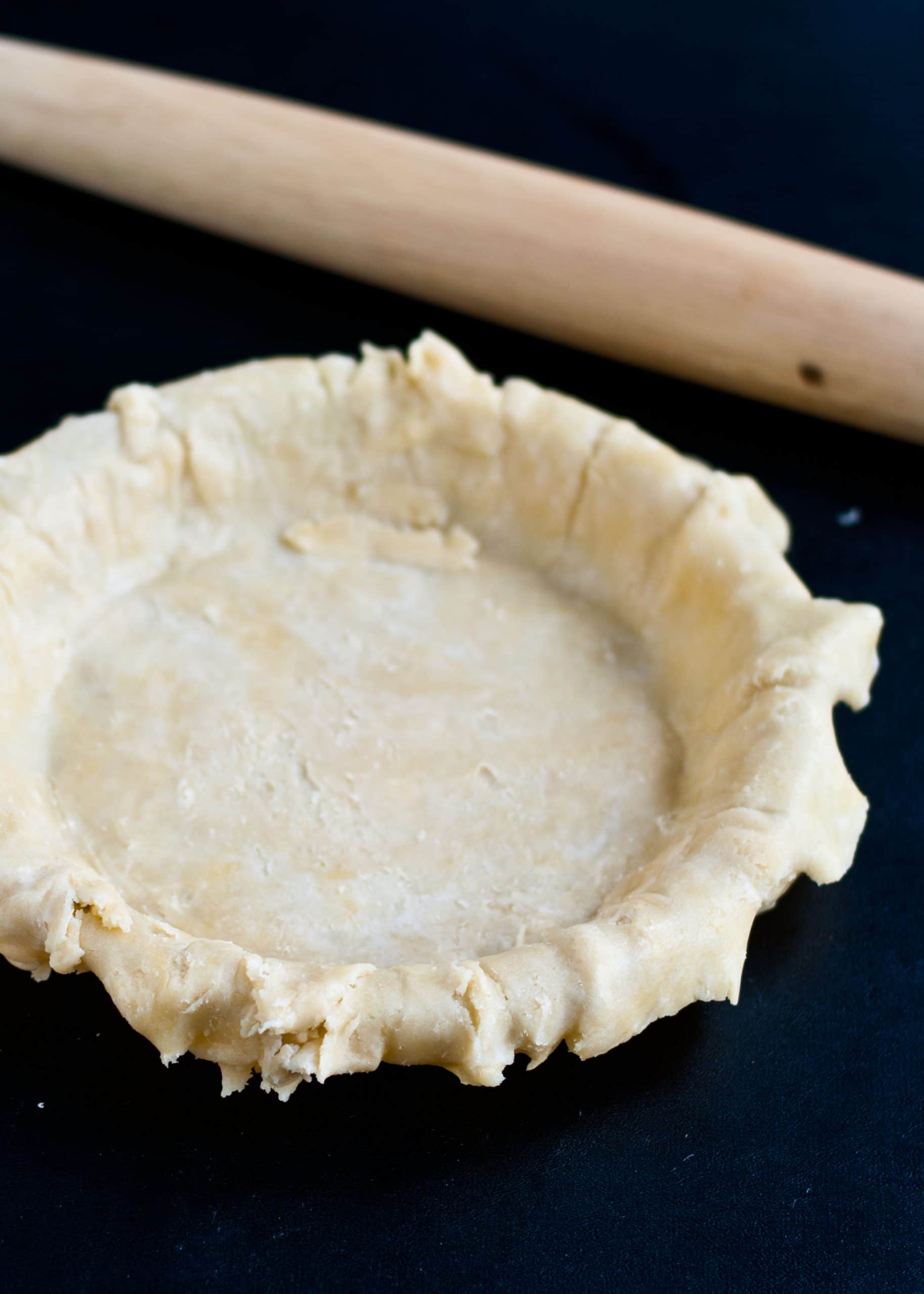 Use your refrigerator- If your pie crust simply won’t stop sticking, it probably hasn’t firmed up enough in the fridge. Save yourself the frustration of trying to peel away a sticky pie crust. In whatever stage you’re in–whether you’re rolling, peeling away the parchment paper, or crimping the crust–if the dough is difficult to work with, put it in the fridge or freezer. It’s amazing what an extra 15 minutes of chilling can do.

Use a food processor if you have one- A food processor can greatly decrease the amount of time you spend cutting the fat into the flour. If I had one, I’d use it every time. Since I don’t, the directions on all my recipes use a pastry cutter (or two forks). If you’re looking for a good tutorial on using a food processor to make pie crust, I recommend this one.

Crimp the crust- I like to use the three finger method. Place two fingers on the outside of the crust then put your thumb on the inside and use it to press the crust between your two other fingers, working your way around the perimeter. To see this and other methods demonstrated, check out this fluting pie crust tutorial.  As you can see, mine is far from perfect, but hey, you want people to know it’s homemade right?! 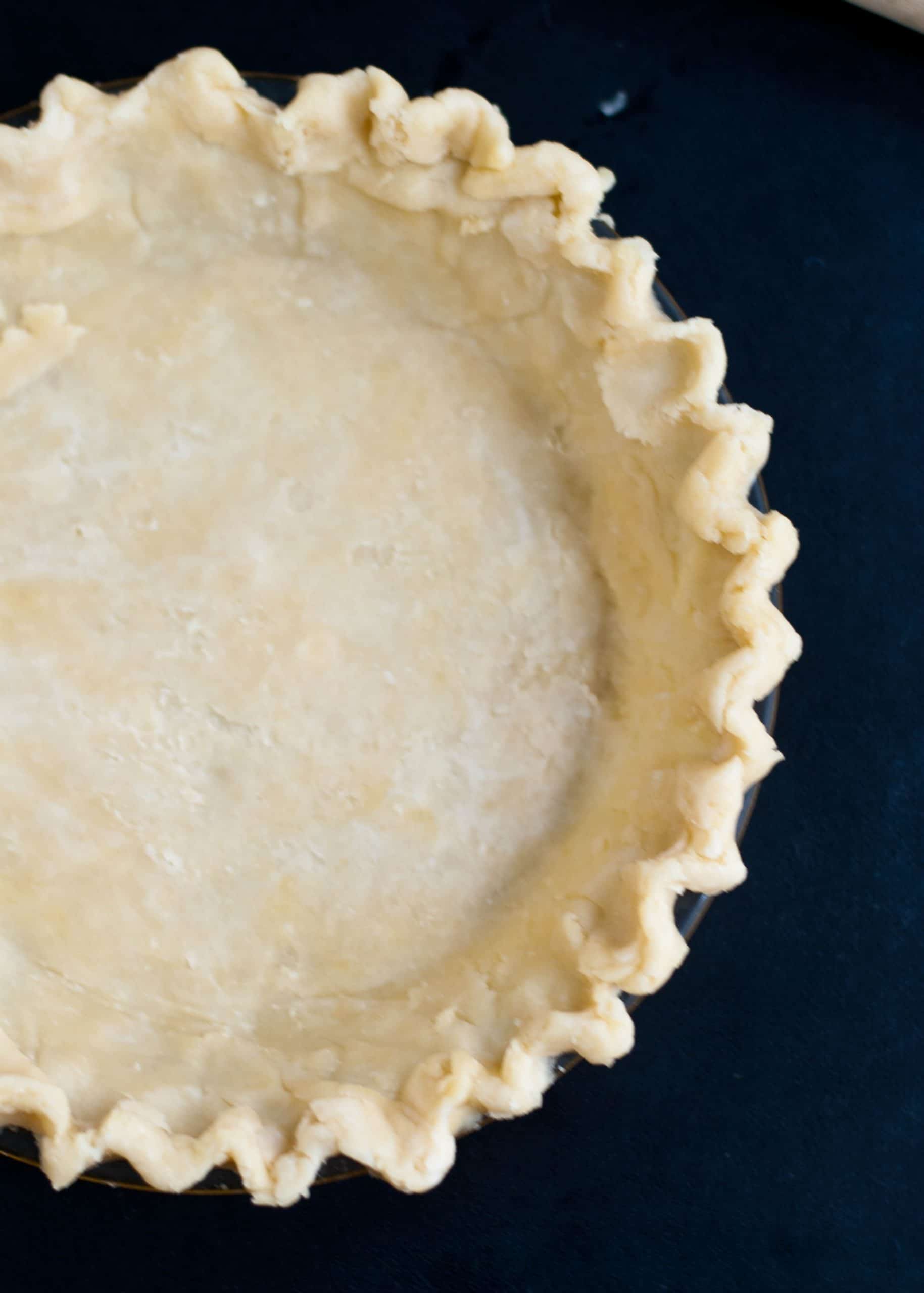 Dying to know what I piled on top of that pie crust? Come back later this week to find out!