These sweet and spicy Chipotle Sweet Potato and Chicken Sausage Foil Packets are a quick weeknight meal made on the grill! 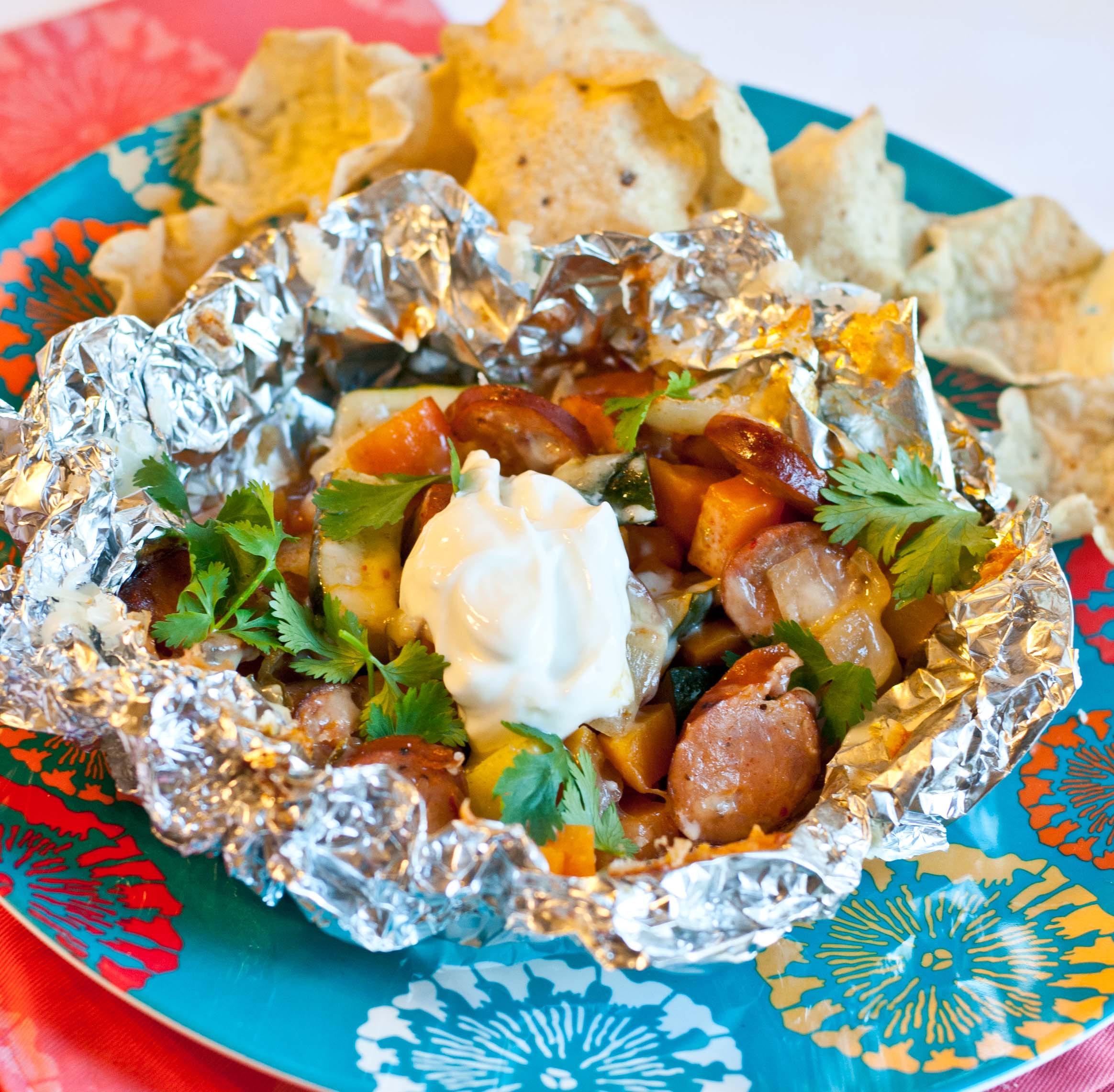 Here’s a little tidbit you may or may not know about me. I’m a church camp girl. I started going to camp when I was in sixth grade and went every single year until I graduated high school, sometimes twice a year. The last two years of camp I was a camper one week and a counselor the rest of the summer. I LOVED camp.

Some of my most formative and memorable experiences come from summer camp. Nothing will deepen friendships like a hot, sweaty hike through mosquito-infested woods or preparing breakfast for 10 hangry campers with only the help of a few coffee canisters-turned-campfire stoves.

Camp is where I learned of the supreme ooey gooey chocolate marshmallow glory of the Smookie.

And I still smile whenever I get a whiff of bug spray lingering with the smell of camp fire smoke. That’s the good stuff.

One of the mainstays of my summer camp was the hobo dinner. One night each week we’d be given a few supplies and sent out to prepare our dinners the old fashioned way–over a fire we made with our own two hands (except for that one time we couldn’t start a fire…then it was made by the camp director’s hands…and a torch.) 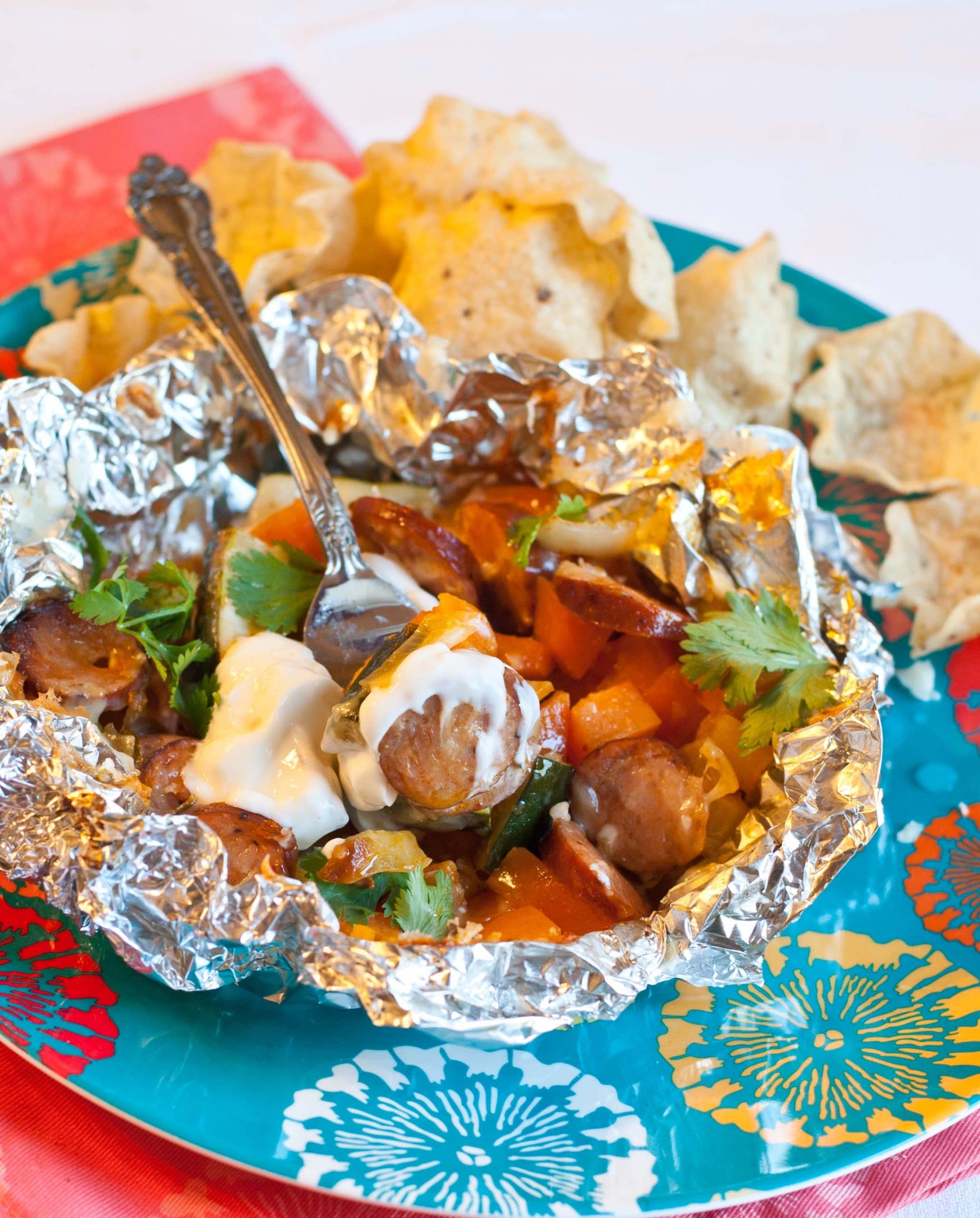 The hobo dinner of camp were pretty humble–just a hamburger patty, some cabbage leaves (to keep the bottom from burning), and some carrots and potatoes. But boy, did they taste good. I don’t know if it was the extra work we put into it, the fact that I was usually famished by the time it was done, or the smoky flavor, but that was one of the best hamburgers I’ve ever had.

This is my adult version of hobo packets. Sweet potatoes glazed in a simple chipotle sauce, tucked in with onions, zucchini, and just a little bit of spicy chicken sausage. I can’t get enough of the combo of sweet potatoes and smoky Chipotle heat. They’re a match made in grilling heaven.

My packets were quite spicy because I used a Jalapeno Jack chicken sausage (which I highly recommend), but for the kiddos you may want to leave the chipotle pepper out. These are a great option if you’re gluten free–just make sure the chicken sausage you pick out is gluten free and you’re golden. 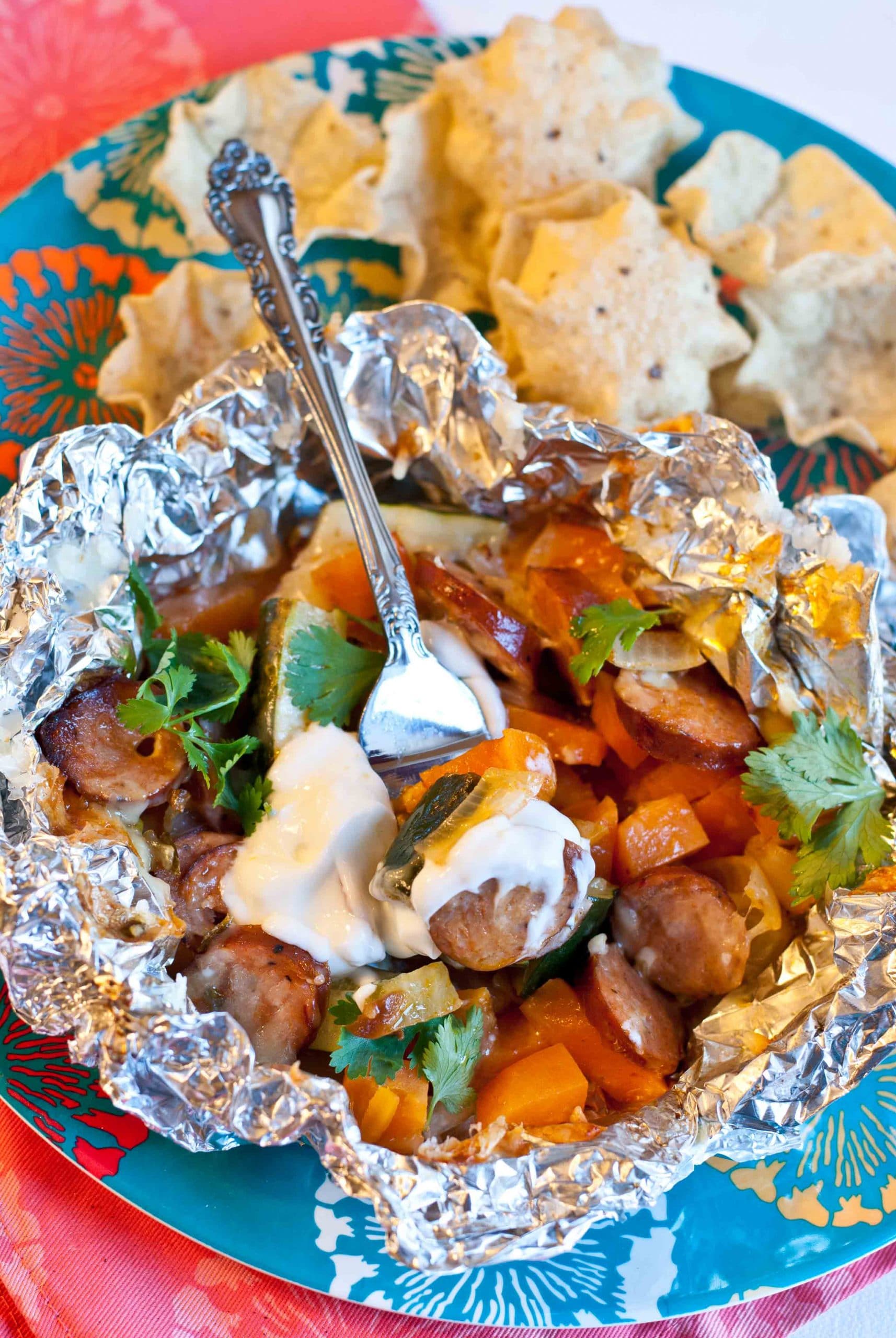 The prep for these really couldn’t be simpler. Just throw everything in a bowl with a few spices then pile it all on a piece of foil. Fold up the foil and seal the edges, pop it on a grill for 15-20 minutes and you’re done.

Except for the cheese. You can’t forget the cheese! When they’re done, unwrap, sprinkle with cheese and serve with a big ol dollop of sour cream, some fresh cilantro, and a side of tortilla chips. Foil packets never felt so fancy.