No need to head to the diner to get a hearty breakfast. This Sausage Gravy and Eggs Hash Brown Skillet will keep everyone satisfied through all your holiday celebrations. 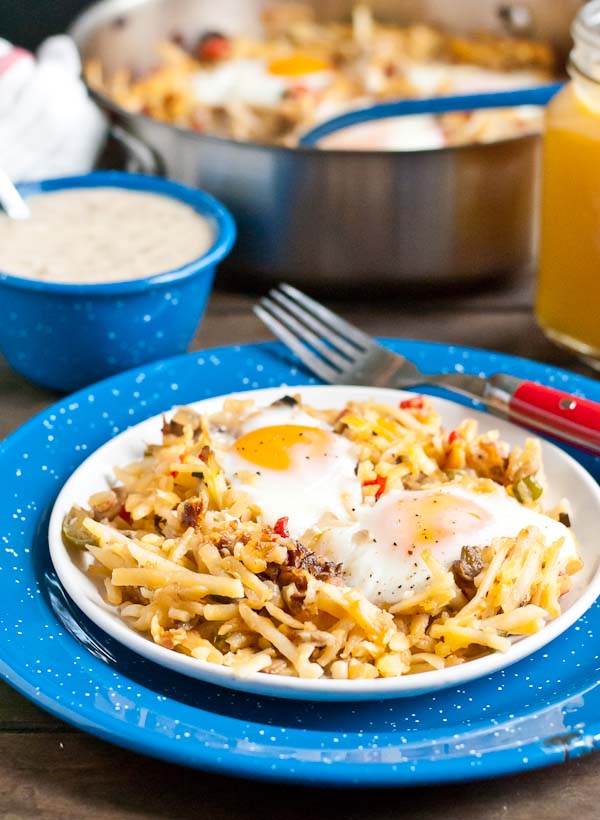 Back in September, the Mr. and I spent a long weekend in a cabin in Western Michigan we rented with a few other couples. We arrived at the cabin late on a rainy Friday night, and as we drove the long, unmarked, heavily wooded driveway back to the cabin, visions of horror movies danced in my head. I spent 90% of the trip enjoying our secluded little spot by the lake, and the other 10% terrified we would all be ax-murdered to death in our sleep.

Thankfully, we all made it through the night and woke up with hungry bellies and zero food in the cabin. A quick Yelp search informed us there were approximately two restaurants in a 15 mile radius serving breakfast. Country living sure does makes decision making easier. We hopped in the car and made the trek from the Middle of Nowhere to the “town center,” which consisted of a post office, a gas station, and a tiny run down diner with a sign that just read “Good Food.” 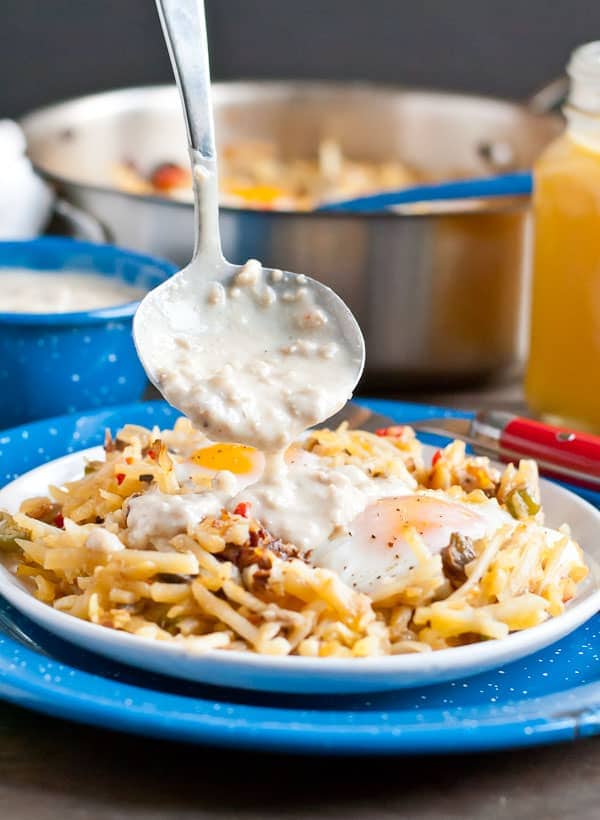 I wasn’t sure what to expect from the looks of the place, but at that point, my hunger was so great I would have eaten a shoe. Our group of 8 was seated in the center of the small dining room, where we were surrounded by what I surmised to be “the regulars.” I’m sure a few of them raised an eyebrow at our obviously not-from-around-here crew, but then they quietly resumed their coffee sipping and paper reading.

After much deliberation over the menu, I settled on the Hash Brown Skillet, but because the food was cheap and I can’t make decisions, I also got a cup of their sausage gravy on the side. This decision turned out to be the highlight of my weekend, even surpassing the cider and donuts we gorged on later that day. The hash browns were crisped, studded with onions and peppers, and topped with a gloriously dippy fried egg. But while the skillet would have been quite satisfying all on its own, the side of sausage gravy really took it over the top. It had all the flavors and textures I crave in a hearty morning breakfast. Plus, it was dang cheap. 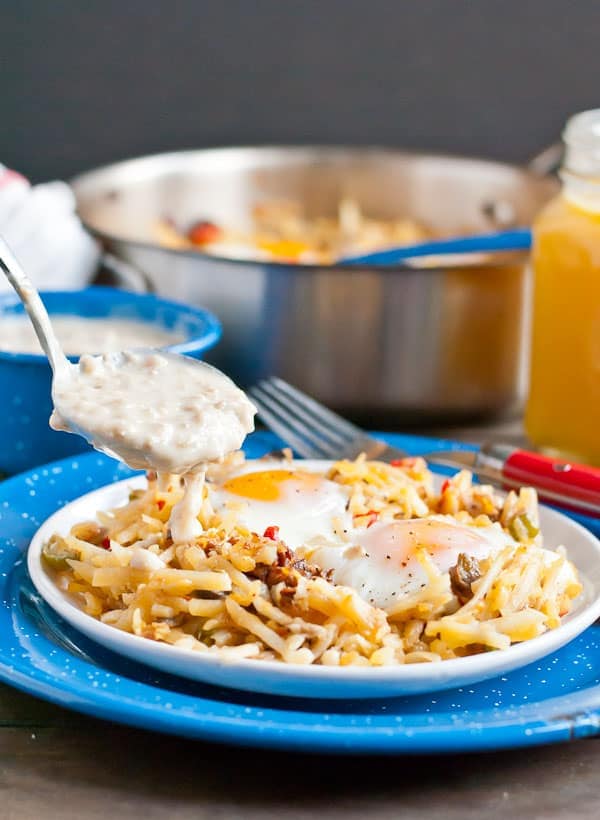 But while the sausage gravy in this dish adds a touch of indulgence, this skillet breakfast is also packed with nutrition from bell peppers, mushrooms, potatoes, and of course, eggs!


Earlier this year, I had the privilege of meeting several egg farmers here in Ohio. I learned so much about the incredible egg, and the dedicated individuals who help bring them to our stores and kitchens. You may remember me discussing the trip and my adventures (including holding a chicken!) in this post. 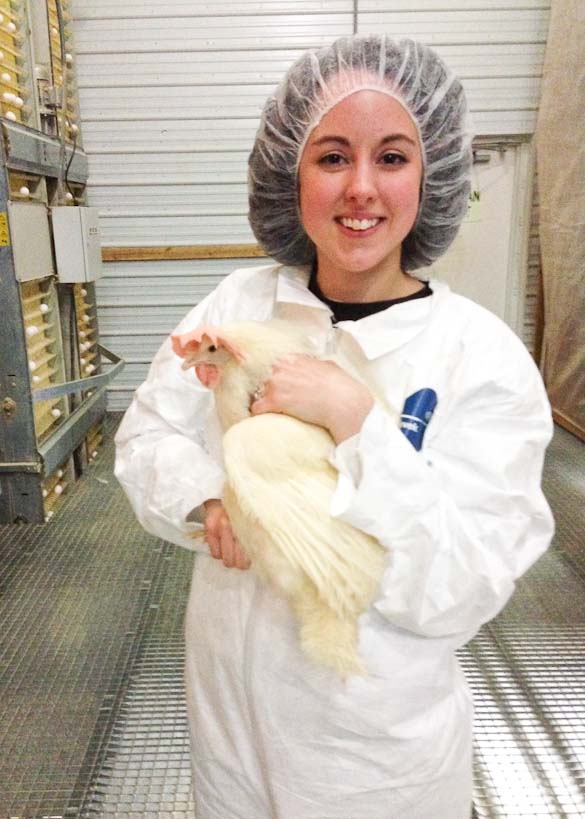 Eggs are a wonderful way to start your holiday mornings, or any morning. Packed with 13 essential vitamins and minerals and containing the highest quality protein of any food, this egg skillet will keep you and your family fueled through present opening, toy assembling, battery finding, and dinner making.

There are a couple of ways to make this breakfast feasible, depending on the size of your group. If you’ve got a group of 4-6 people the hash browns and eggs can be prepared in a single non stick skillet on your stove. If I’m fixing a meal for a crowd, I like to pull out my electric skillet and fry a massive quantity of hash browns and eggs-cooked-to-order on that. Here’s the key to hash browns though–leave them alone! Throw them in the skillet, pat them down, and don’t turn them until they’re golden and toasty! The sausage gravy will require another sauce pan, but it can be made the night before, then reheated and given a good whisk in the morning. 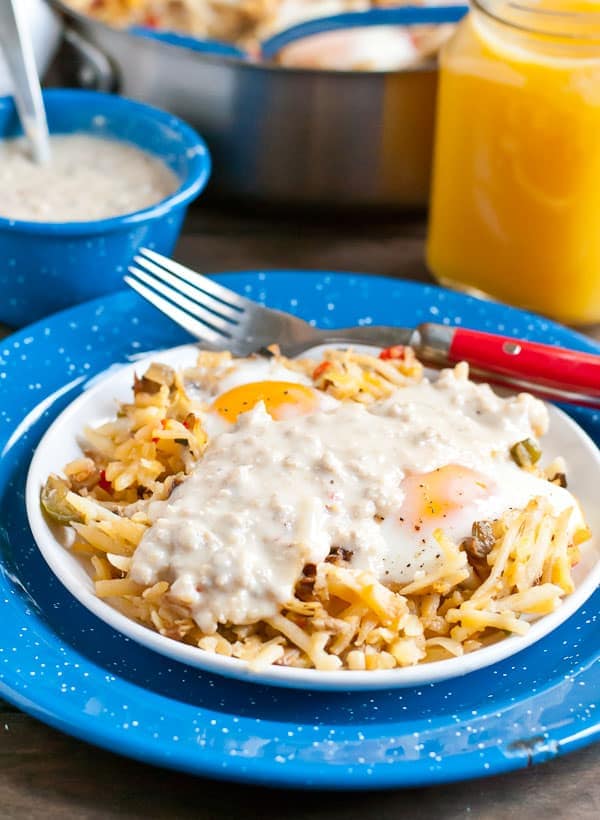 This Wednesday night at 9 PM on Twitter, we’re talking holiday recipes and baking and cooking with eggs with the Ohio Poultry Association. Join us by following #holidayscramble. I’m egg-cited to see you there! 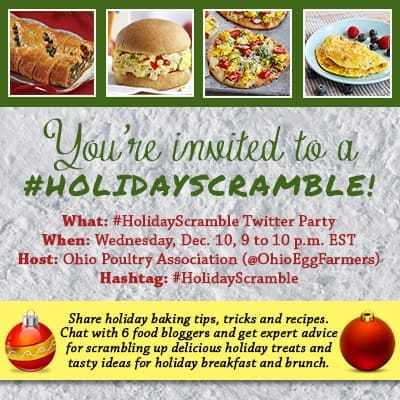 For the hash browns:

If you would like to double this recipe to feed a large crowd, I suggest making the hash browns on an electric skillet and topping individual portions with fried eggs.

This post is sponsored by The Ohio Poultry Association. As always, all opinions are my own.

and since I mentioned donuts earlier, check out my recipe for homemade Chinese Doughnut