This classic Orange Julius Recipe is made in just 5 minutes and is such a refreshing treat on a hot summer day! 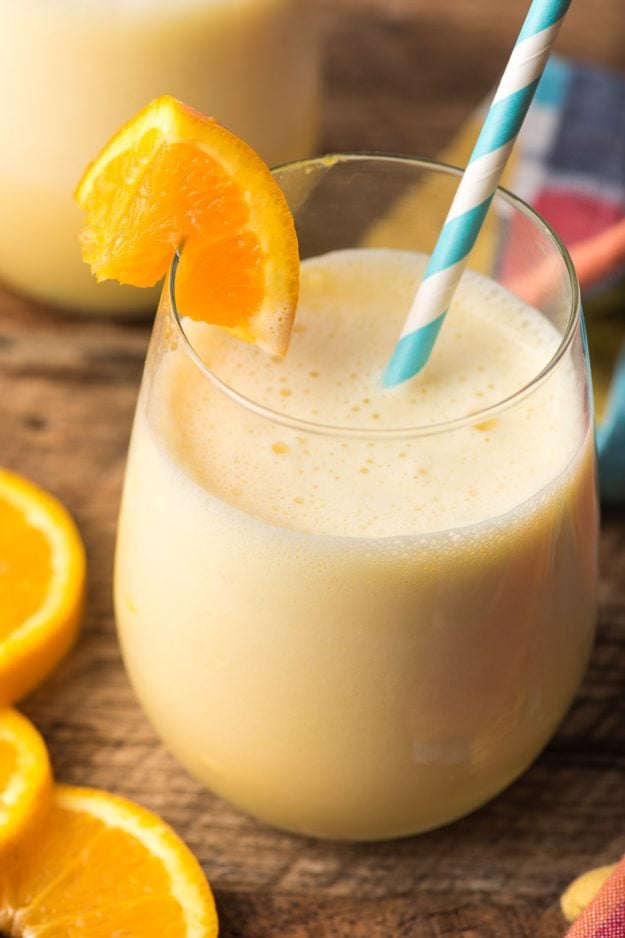 When I was little, I thought my mom invented the original Orange Julius. I had no idea there was a chain of stores with the same name or multiple cookbooks featuring an Orange Julius recipe, trying to copy the taste and texture of the original. For all I knew, mom had come up with this dreamy orange concoction all on her own, and for that, she was a genius.

I remember sipping on Orange Julius as a special after school snack or weekend treat. Occasionally I would get a craving for it and beg mom to make me one. She usually obliged.

Eventually, I started making them, and because they are so simple (5 ingredients and a quick whir of the blender), this was the first recipe I managed to master all by myself.

It wasn’t until I was an adult that I first saw an Orange Julius store in person. At first, I thought that some ne’er-do-well had stolen Mom’s Orange Julius recipe and turned it into a popular franchise serving counterfeit creamy drinks. Treachery! 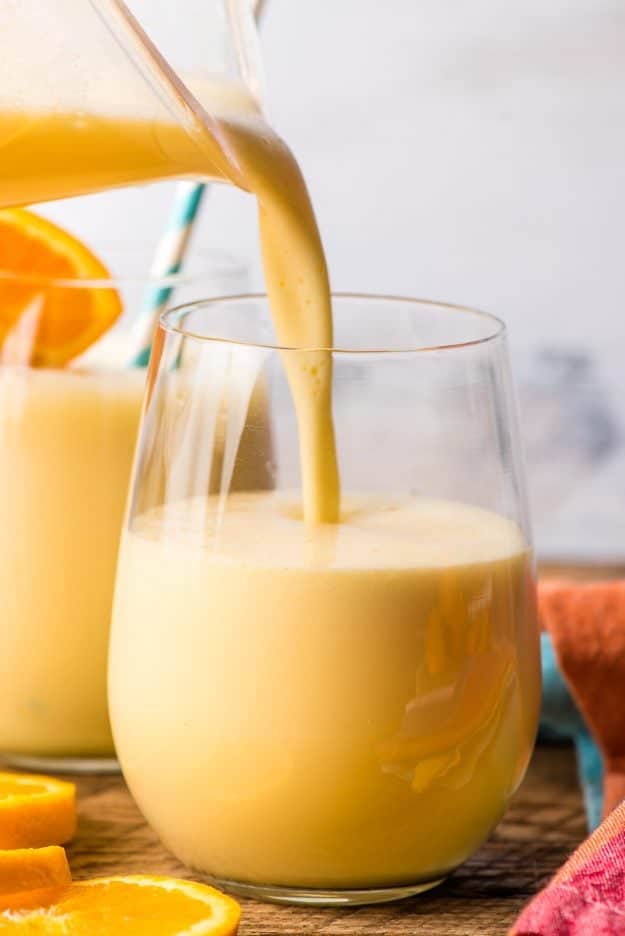 Eventually, clearer thinking prevailed, and I realized Mom’s Orange Julius recipe was one of hundreds just like it out there in the world. (Though I still raise an eyebrow every time I see one of those corporate lie factories. You’re a wolf in sheep’s clothing Orange Julius, I just know it!)

Anyways, despite the realization that mom doesn’t hold the patent to the first Orange Julius recipe, I still think she is a genius and that her homemade Orange Julius is the best around. 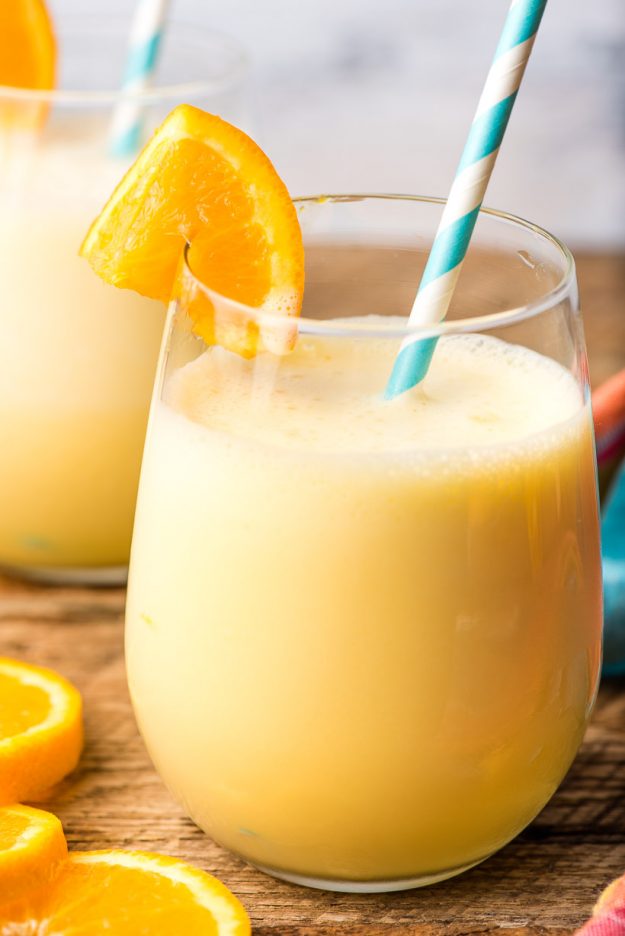 No Water in Orange Julius

You can find countless Orange Julius recipes that use water as an ingredient, but my advice is to skip the H2O and just use more milk. After all, you’ve already got ice cubes in there, and going exclusively with milk keeps your Orange Julius nice and creamy.

Milk (as an Orange Julius ingredient) also just does a better job of suspending the flurry of little ice chunks and orange-y bits than water. More water makes for a thinner mix that will settle and separate the longer it sits in your glass (or in the pitcher). No thanks. 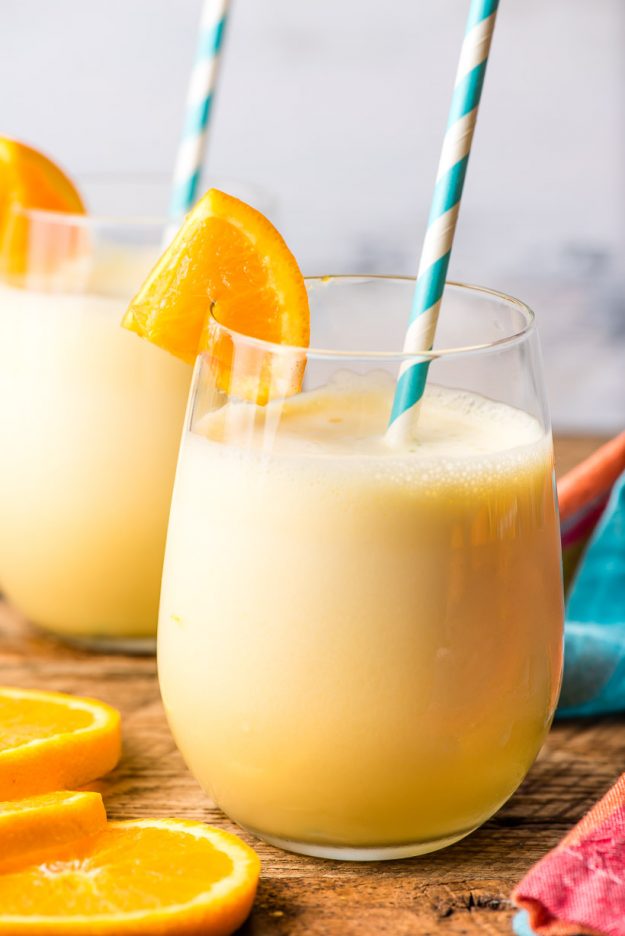 This comes down to personal preference, but I like my Orange Julius to be the texture of a thick smoothie. Still sippable through a straw, but slushy enough that if you try to gulp too much at once, it will brain-freeze the living daylights out of your head.

When you think about it, the icy-cold texture of Orange Julius is like a built-in traffic cop that regulates how fast you drink it. If you’re feeling some relaxed summer vibes, then slowly sipping on some Orange Julius is like a wonderful stroll along the beach. Try to shotgun the stuff though, and it’s gonna make you feel like Princess Elsa is blasting her ice castle freeze ray inside your noggin. 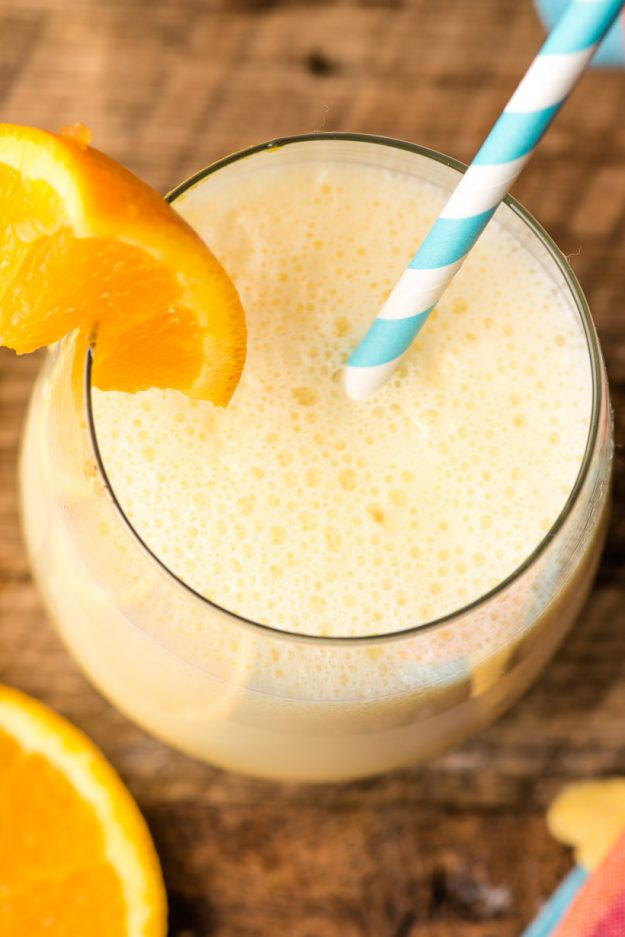 Use my Orange Julius Recipe below as a starting point, and adjust the amount of ice cubes depending on your preferred texture, and how big your ice cubes are. You can even add enough ice to make your homemade Orange Julius thick enough to eat with a spoon (think the texture of Italian ice) if you’re into that sort of thing.

Also, note that I use double the vanilla extract of other similar Orange Julius recipes (*and yes, that’s on purpose). I am a self-admitted vanilla addict, going as far as making my own vanilla syrup for vanilla iced coffee and putting it in everything from waffles to buttermilk biscuits to pear bundt cake. I’ve even gifted vanilla bean syrup to friends. I may not be as committed as these folks from Hawaiian Vanilla Co., but at least when it comes to eating vanilla, you can totally trust me.

How To Make Orange Julius

Making a homemade Orange Julius is super easy and quick.

See? I told you it was easy! I’ll bet it took even longer to search the phrase “How to make Orange Julius,” than it actually takes to make a pitcher. 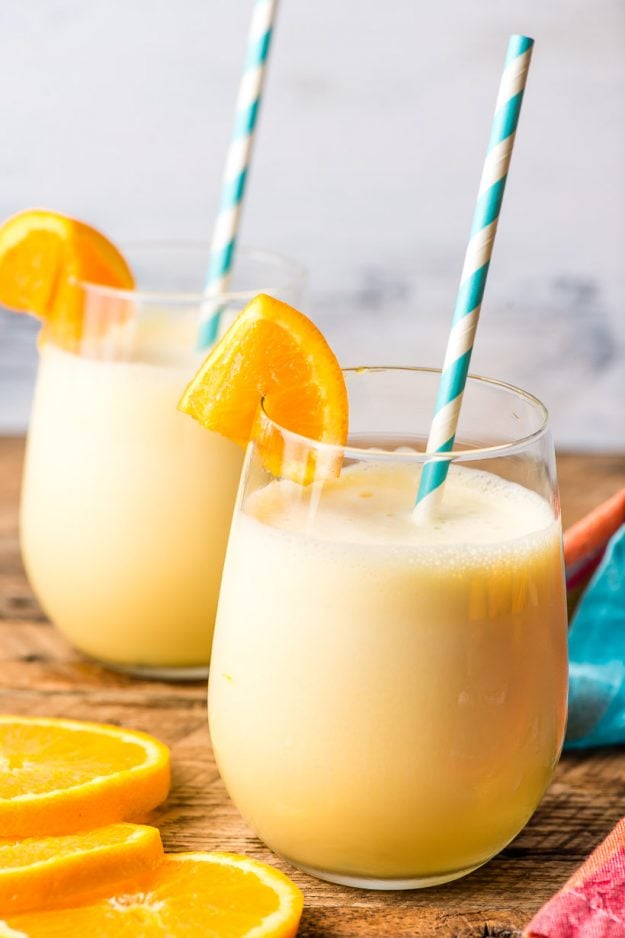 The Orange Julius recipe below makes a creamy, frothy, refreshing drink that’s perfectly balanced, and difficult to resist. It’s like drinking a glass of orange creamsicle.

Serve this icy summer favorite to your family and friends with as much love as my mom used to, and they’ll be so impressed they might even think you invented the recipe.

This post was updated on July 5, 2019. I’ve kept the original story below for my own records, and because deleting it feels like ripping pages out of my own diary.

Full credit for this recipe goes to my amazing mom.

After all, she’s the one who sang Jesus Love Me, sat down on the floor to play Barbies with me, made clothes for my baby dolls and stitched together my first prom dress. She’s the one who made dinner each night and drove me to musical practice and made sure I looked presentable when I headed off to school (although some of those early 90s puffy sleeve dresses were questionable, Mom). She’s the one who read me stories at bedtime and kissed my scraped knees and showed me how to care–really care–for other people.

That’s the magic of moms, isn’t it? They are our super women, the daily heroes grinding out laundry and juggling a job and putting food on our dinner tables and still finding time to bring a smile to our face by playing a game of hide and go seek, or by serving up a special homemade treat. And through it all they manage to teach us some of life’s most important lessons.

I don’t care how old I get, my mom (the inventor of the original Orange Julius) will always be super woman.