These Twice Baked Chili Cheese Potatoes are a satisfying dinner! 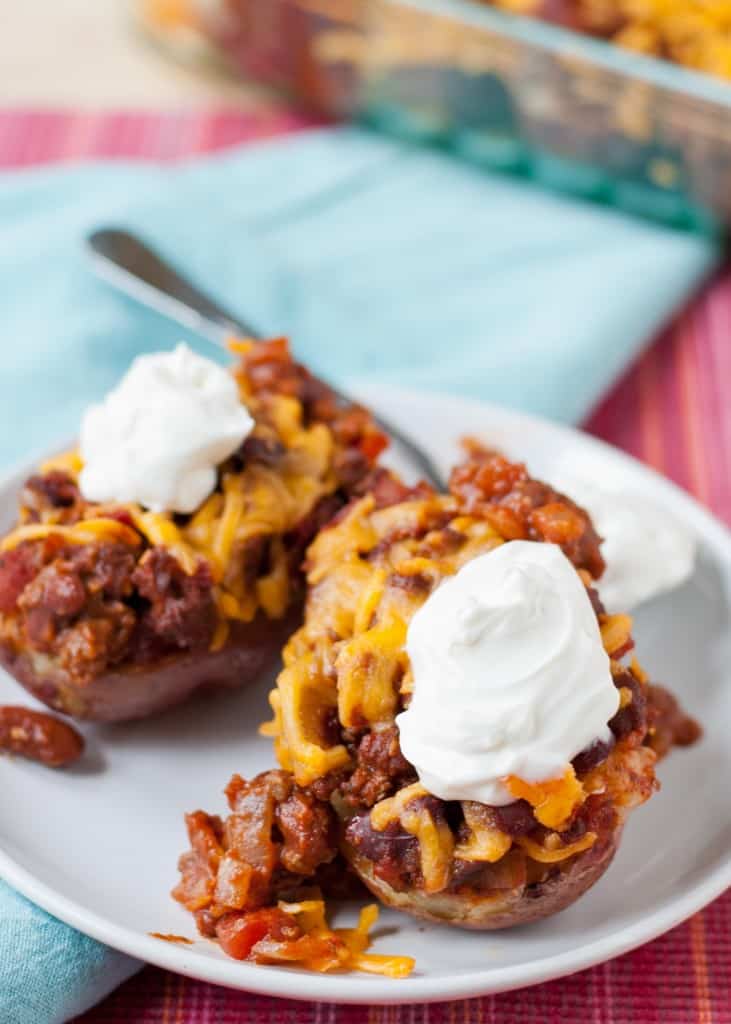 It’s game day!  For some, I’m sure this means donning your favorite jersey, yelling at the TV screen, and spending 4 hours of your life biting your fingernails off in frustration/excitement/nervousness.

But for those of us who don’t have a team playing in the big game, today means buffet tables laden with Bacon Wrapped Smokies and Slow Cooker Queso, conversations with friends, and occasional glances at the television to see if the newest beer commercial will actually be funny.

And you know what? I like it that way.

I don’t know what I’d do if the Browns ever decided to be good and actually played in the Super Bowl. I’d have to pay attention for a full four hours!

How would I find time to wander back to the table and grab more wings? When could I work in a conversation with my girlfriends about the latest Bachelor episode? And how would I ever be able to spend the second half of the game analyzing the fashion choices of the half time performers?

It would never work. That’s why I was meant to be a Browns fan. 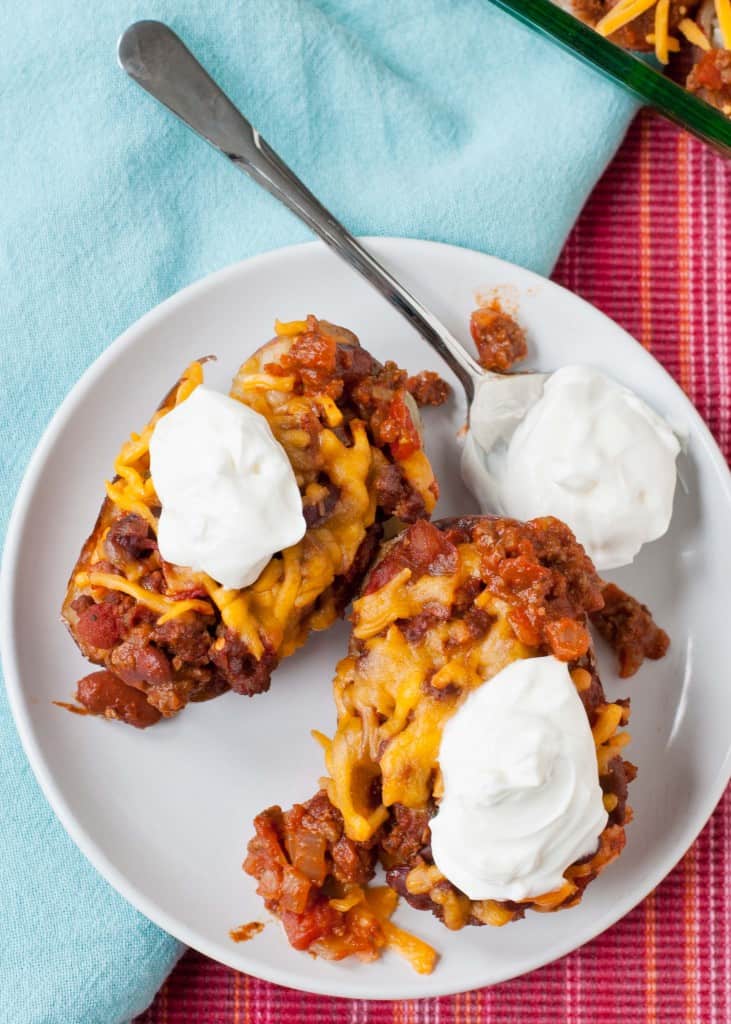 But that’s besides the point. The point is, today is all about f-o-o-d. Greasy food. Cheesy food. Fried food. Saucy food. Meaty food. Pretty much all the foods we’ve been told to stay away from all month.

If you’re going to break your New Year’s resolutions, this would be the time, because the Super Bowl party potluck rivals any major holiday in its grandeur and scope. It’s like ordering the sampler platter at a restaurant…only waaaaay better. Because instead of 4 items, you get 18. 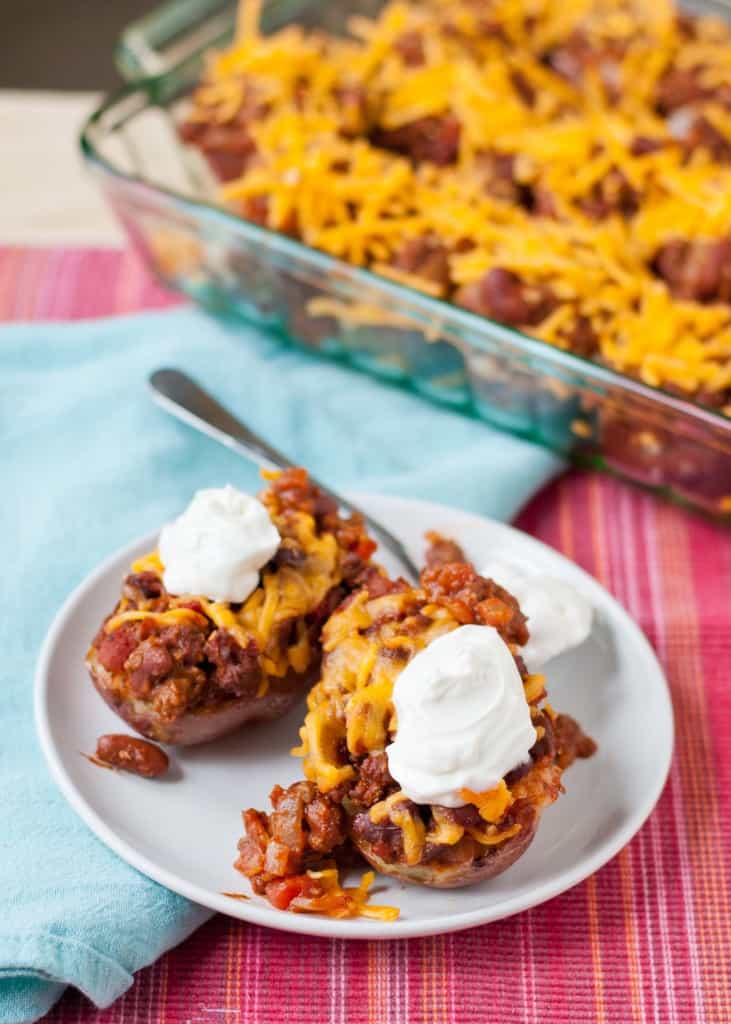 These Twice Baked Chili Cheese Potatoes are essentially a slightly healthier version of the beloved stadium snack–chili cheese fries. I’ve always been a fan of the smothered french fry concoction, but there are a couple of issues with it.

First, if you don’t eat them very quickly, the once crispy fries are reduced to a soggy, gloppy mess. At this point, it becomes impossible to pick them up with the sauce because they’ve gone wet-noodle limp.

Secondly, the cheese sauce. If it’s hot, it’s amazing. But if you allow that stuff to cool it becomes painfully obvious that it’s not, in fact, real cheese, but is instead some kind of orange goo made from God knows what.

Third: frying French fries. I love all my friends, but I’m not doing that. Especially not during the Super Bowl. I want to watch the talking e-Trade baby too, you know. 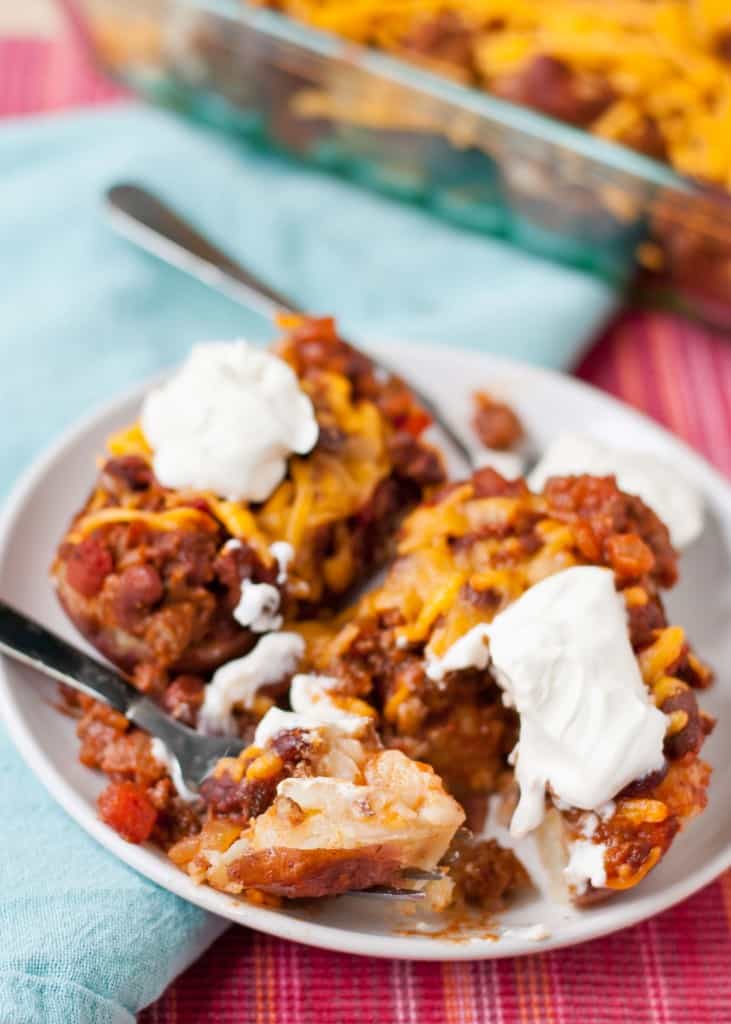 To solve this problem, I just changed up the medium. French fry becomes baked potato covered in chili then baked with a layer of shredded cheddar cheese.

It’s hearty comfort food that you can easily make ahead and serve to a crowd. Truthfully, the twice baked part of this took more time than I would have liked, but I think there are a couple different ways you could switch this up if you’d prefer.

First, you could skip the twice baking completely and just slice the potatoes, ladle in the chili, cover with cheese and serve. Or, if you prefer, you could cube the baked potatoes, mix them with the chili in a casserole dish, cover it with cheese, then serve it with a spoon like a casserole.

Either way would be great, but I have to admit, twice baking the potato with butter and cheese and green onions really does give it more flavor, and since you can do all the steps ahead of time, it’s still a dish you can easily make for a party.