I took my favorite chewy cookie recipe, subbed pumpkin butter for regular butter and stuffed it with pecans, fragrant cinnamon, and spicy nutmeg. 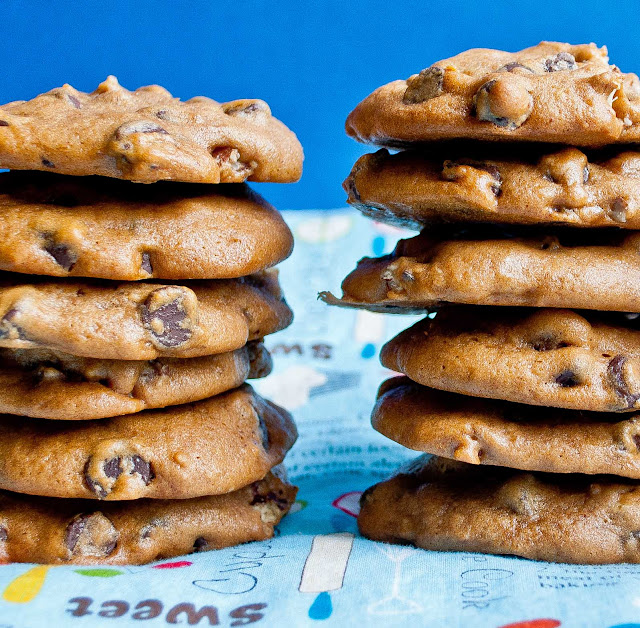 I’m sorry guys, but I couldn’t put this off any longer. We’ve already made our annual trip to the apple farm and things have quickly gotten out of hand.

To this point, I’ve already made Apple Cinnamon Pancakes topped with Apple Cider Syrup, I’ve mixed up a pitcher of Apple Cider Punch, and with all of the apple-themed baked goods I’ve made, I should just start my own orchard-adjacent bakery.

My baking journey started with salted caramel sauce drizzled Chewy Spiced Apple Cake, then graduated to a totally breakfast-appropriate Apple Crumb Cake, and now my focus has shifted to PIES.

Even my wardrobe is trying desperately to tell me something. I’ve worn boots twice this week. A scarf is becoming a regular part of my attire. There’s just no getting around it.

This year while we were at the magical place that is Lynd’s Fruit Farm, (*thanks Julie at “What Should We Do Today Columbus” for the recommendation) celebrating everyone’s favorite bulbous gourd, I discovered something wonderful. Thick, sweet, burnt orange pumpkin butter.

Well, of course, I had to grab ten jars a jar and take it home with me. Then came the tough part. Deciding what to do with it (other than eat it with a spoon…which I did…multiple times).

I’m already spooning the stuff onto just about every sweet breakfast food that’s around. These Buttermilk Pancakes. Yep. It tastes wonderful on a toasted slice of my Amish White Bread. It’s also great with bananas, so my Banana Crumb Cake, Sour Cream Banana Bread, and my Cinnamon Apple Breakfast Banana Splits had better run for cover.

It’s even great on these Healthy Pumpkin Blender Muffins! That’s right, I put pumpkin butter on an already pumpkin-ed muffin. (Don’t worry, I stopped myself before I tried it on my Pumpkin Crumble Cake.)

After decimating a jar of the stuff, I decided it was time to stop using it as a condiment, and start using it as an ingredient.

My pinterest feed has been overtaken by pumpkin desserts–everything from towering stacks of pancakes to donuts to layered pies–but in the end I was in the mood for something a little homier. Something comfy and cozy, familiar and warm. I was in the mood for chewy chocolate chip cookies. (Which, let’s face it, is really what I’m in the mood for 95 percent of my life). 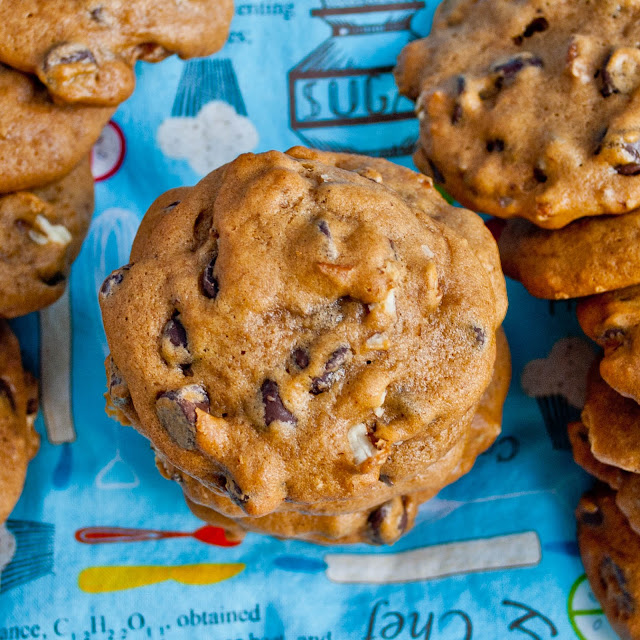 So I simply took my favorite chewy cookie recipe, subbed pumpkin butter for regular butter and stuffed it with pecans, fragrant cinnamon, and spicy nutmeg.

Now I don’t know what it is about pumpkin that causes all baked goods to become cake. I swear if you tried to make pumpkin pudding, (*we did actually… we made these delightfully spooky Halloween Pumpkin Dirt Pudding cups… BUT OTHERWISE) pumpkin turns just about every other baked good into cake. And I wasn’t after a fluffy cake cookie. I was after a chewy cookie, something I could sink my teeth into.

I tried this recipe several different ways to achieve the chewiest result. The trick I found was to bake at an average temperature (350 degrees), remove from the oven while they’re still underbaked in the middle, and don’t let them set up on the pans. As soon as you get them out of the oven, whisk that parchment paper off the pan like you’re a magician, and let the cookies set up on the cold hard counter top. I found with this method, the cookie fell in on itself leaving a perfectly chewy center. If you want a fluffier, cakey cookie, bake a little longer and let them set up on the tray. As you can see, there’s a pretty big texture difference between the two methods. 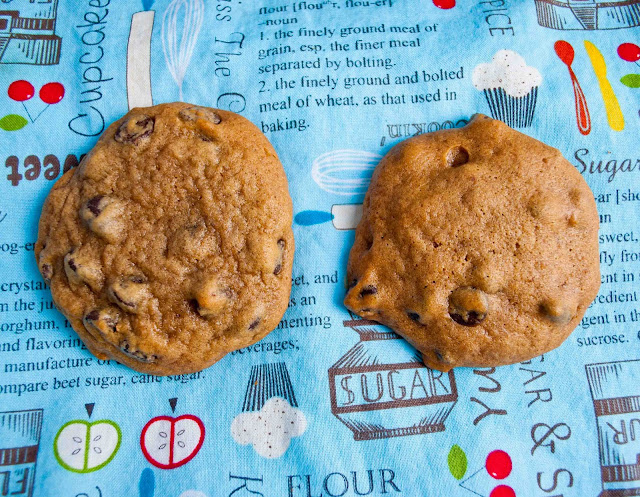 The result? A lightly spiced, subtle pumpkin flavor with all the toothsome, buttery goodness of my favorite chocolate chip cookie. This cookie doesn’t scream “Hey look at me! I’m pumpkiny!” It’s much more reserved, gentle. It whispers, “Hey there, friend, why don’t you snuggle up to my craggly self and settle in for a little fall surprise.”

And then it’s all weird because you’re cookie just whispered to you. And asked you to snuggle it.

Just do it. The awkwardness will wear off as soon as you take a bite.

This post is linked over at Roxanna’s Chocolate Party! This month’s party was all about pumpkin and chocolate. Check it out!