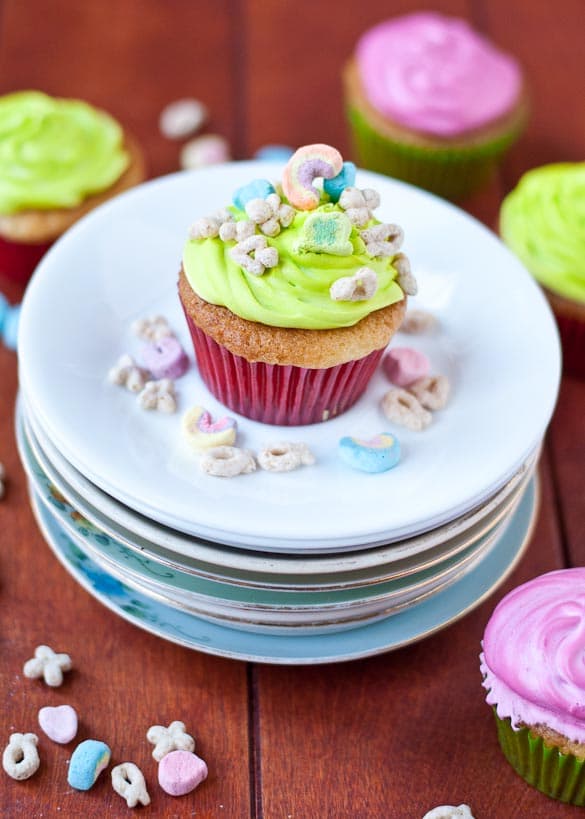 You guys already know I’m a big fan of breakfast. Waffles, omelets, pancakes, french toast, BACON, I love it all.

But the truth is, my very favorite breakfast is….cereal.

I eat it every single day. Occasionally twice a day. I know, I know. LAME! You wanna hear the really lame part? My go-to cereal is a combination of Raisin Bran, Honey Nut Cheerios, and something with the word flax in it. 12 year old me is sooo disgusted with current me.

What can I say? I love cereal in all it’s bran filled, fibery, raisin-spotted forms.

But I’ve not become such an adult that I don’t appreciate revisiting the sugar laden cereals of my childhood every now and then. Occasionally, I’ll pick up a box of Fruity Pebbles or Lucky Charms or Cinnamon Toast Crunch, and all will be right with the world. I call these dessert cereals, and I unashamedly love them.

Which is why when I discovered Jessica Segarra of The Novice Chef’s cookbook, Cereal Sweets and Treats, I felt like I had found a kindred spirit. 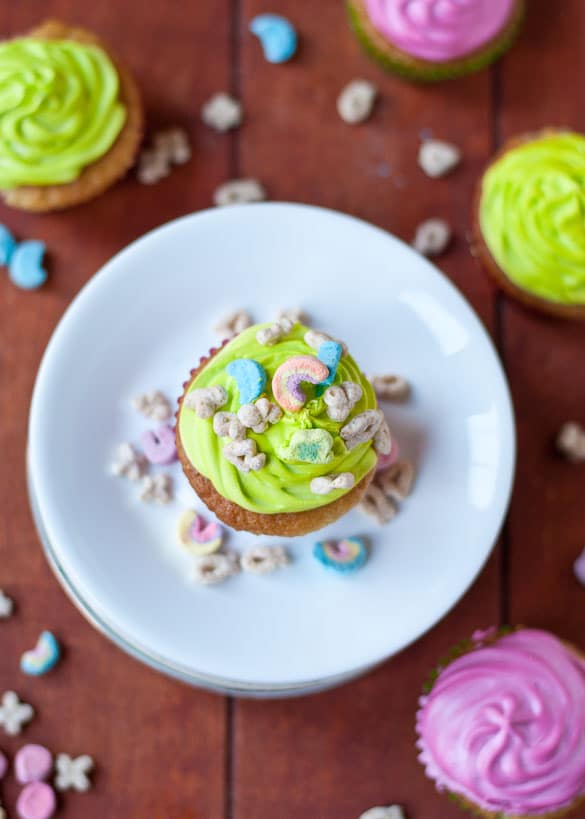 Jessica’s cookbook is filled with ways to turn your favorite cereal into dessert. I stumbled upon her Lucky Charms Cupcakes while searching for St. Patrick’s Day recipes and knew they had to happen immediately.

I’m sure you’re wondering, as I was, how you make a cupcake taste like Lucky Charms. The answer is surprisingly simple, and completely genius.

Jessica soaks Lucky Charms in milk for 20 minutes, until the oats have softened and the marshmallows leave trails of pink and blue behind them.

Then she takes that sweet, sunset hued milk, drains out the Lucky Charms, and uses it to make cupcakes.

These cupcakes taste remarkably Lucky Charmish. They have a delightful sweetness and oatiness that I can only ascribe to the cereal milk.

I made her recipe pretty much as-is, but found I needed a double batch of the frosting for the amount I was piping on. Guess I like frosting! I decided to play around with my new Neon food coloring from McCormick, and I loved the bright greens and pinks with the Lucky Charms scattered about. 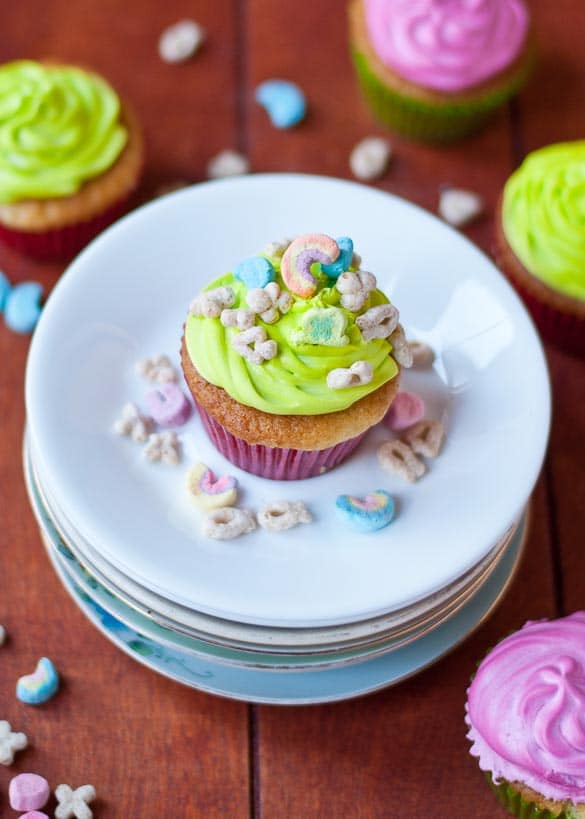 A few notes on the frosting:

2) It involves a double boiler, but I promise you this doesn’t mean it’s hard! Just make sure to whisk constantly while the eggs cook. They’ll be frothy and warm to the touch within 2-3 minutes. Don’t worry if it takes awhile for them to thicken up. I had to whip mine for a good 7-8 minutes before I saw peaks begin to form. That said, if the mixture is suuuuper sticky and thick, something went wrong. It should be spoonable and easily piped through a piping bag.

3) The frosting doesn’t keep particularly well. It holds its shape perfectly fine, but it will start to dry out after 24 hours. Store in an airtight container on the counter and serve it within a day.

This frosting holds it shape well, but it dries out rather quickly. Place the cupcakes in an airtight container and serve within 24 hours. These cupcakes should not be refrigerated.